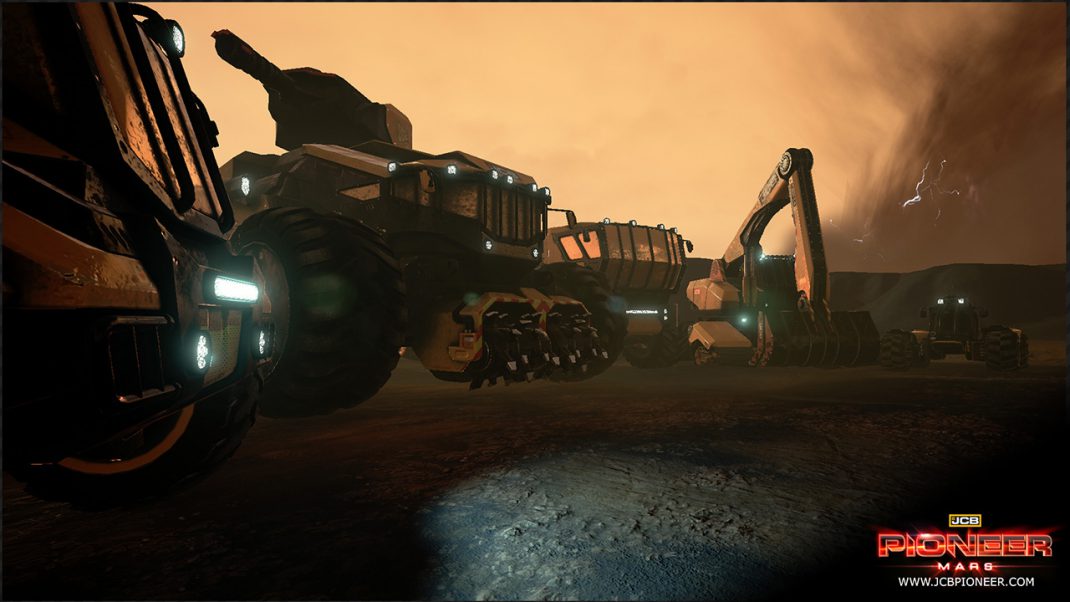 Liverpool, United Kingdom – August 18th – Independent studio, Atomicom and publisher GamesCo, today announced that JCB Pioneer: Mars, its survival sandbox game, will launch on Steam Early Access on August 31st. To accompany this announcement, the team are delighted to share the short video feature, “Tools Of Survival”, outlining the technology the player must rely on to successfully survive and subsequently colonise the harsh Mars environment. The video focuses on the beautiful, speculative space suits designed by Jim Bowers, co-creator of the illustrious Wipeout series, and the ultra-rugged, futuristic JCB vehicles, custom-designed by engineers at JCB. By using these tools to their maximum effect, players may master the alien landscape and ensure humanity’s future lies beyond planet Earth.

“We’re thrilled to announce the Early Access release date of JCB Pioneer: Mars. This is the first step players can take on their journey to colonise the red planet,” said Andy Santos, Design Director of Atomicom. “With the Tools Of Survival video, players are given a taste of the custom-designed technology and how it is crucial to their survival.”

“We are hugely excited by the announcement of JCB Pioneer: Mars’ Early Access release date,” said JCB Worldwide Marketing Director, Michael Plummer. “Members of our design team have relished the opportunity to create these futuristic space vehicles. We’re delighted that players will be able to use JCB machinery on the planet Mars before using them on earth.”

JCB Pioneer: Mars begins as the player awakens from a crash, surrounded by the wreckage of their Lander vehicle amidst falling debris and hurtling winds. Survival is the first goal – locate oxygen and establish an outpost. As the player slowly begins to establish him or herself on Mars, learning to combat the planets fierce and hostile weather patterns, they begin a larger operation of colonisation. Life-support infrastructure is crucial but so is mining natural resources, as part of a broader mission to save an ailing Earth.

With esteemed astrophysicist, Dr Maggie Lieu, providing advice to Atomicom during the development process, as well as making an in game cameo appearance, JCB Pioneer: Mars is a hardcore blend of survival and construction gameplay set on the hostile, alien planet. Meteor strikes, dust clouds and electrical storms all threaten the player’s survival and chances of a successful colonisation effort. But equipped with the futuristic, heavy-duty construction and mining vehicles specifically designed by JCB Engineers, every would-be astronaut has a chance of surviving and thriving in the face of extreme planetary challenges.