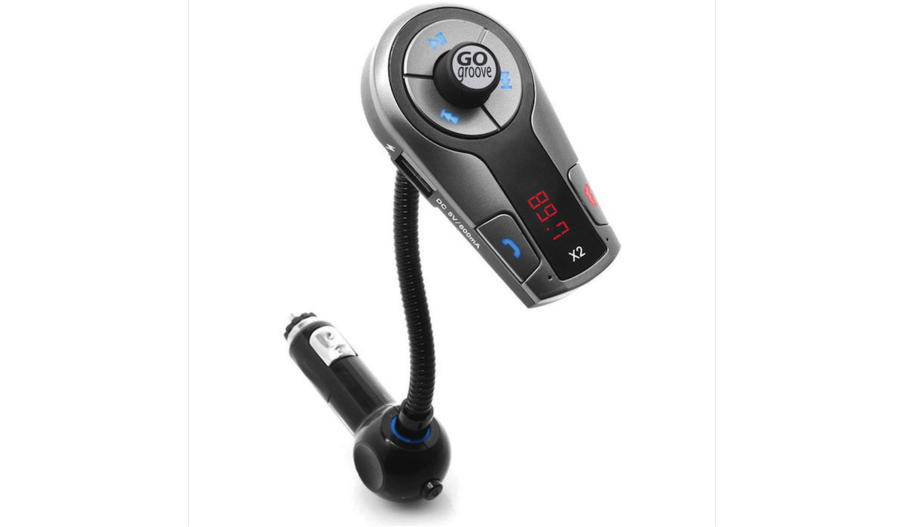 In our family, we are no strangers to long distance trips. We used to have to make 18 hour round trips just to keep our medical care up and found that books on tape were good but that podcasts were better. To hear our audio during the trip, we would have to plug a cable into to the auxiliary port and try to ignore “The Buzz”. I give it a name because it was akin to a third person in the car, making noise over whatever you listened to from your phone. eventually building to make the podcast indiscernible and the moment we unplugged the phone to use it for a call or a text the stereo volume would come through at the rate you had slowly been working it up to: ear shattering. Thankfully we were able to finally give Buzz the boot when we tested the GOgroove FlexSMART X2 Bluetooth transmitter.

Pump Up The Volume

First off the FlexSMART X2 features Bluetooth 2.1 connectivity, USB port interface, FM tuner, Auxiliary-in port, and DC power surge protection, so it is not just a glorified tuner. That being said, setup only takes seconds and the system has an LED display hub lets you control your music and take calls with ease. You can even pair two devices to the GoGroove at once so you can take calls and stream audio from either.

Once you are wirelessly connected to the your devices, it is hands free all the way. If a call comes in while you are driving it even lowers the volume levels of your music to connect to the the call. It has a built-in microphone with voice detection so the conversation will come through clearly.  You can even charge through the USB port so your device can keep it’s power along with the FlexSMART though, personally, I like having a separate power connection if I can so that I don’t have to worry about loosening the fit in the DC outlet overtime.

Speaking of DC outlet, I found that once I had it in place and my phone connections in place I just left them be until the next big metropolitan area.  Another nice thing about the FlexSMART is that you can tune it more than a few pre-programmed spots, you can fine tune into anywhere you want. They seem to have thought of just about everything since they even set it up so you could use an aux cable if you don’t have Bluetooth.

The GOgroove FlexSMART X2 is the perfect solution for any audio system that doesn’t have Bluetooth.  It is a tunable Bluetooth audio system, a DC to USB port, FM tuner, DC surge protector, hands-free phone system and it pairs up in seconds.  I don’t know how I have made it through all these years with out it. Bye Bye auxiliary port buzz!