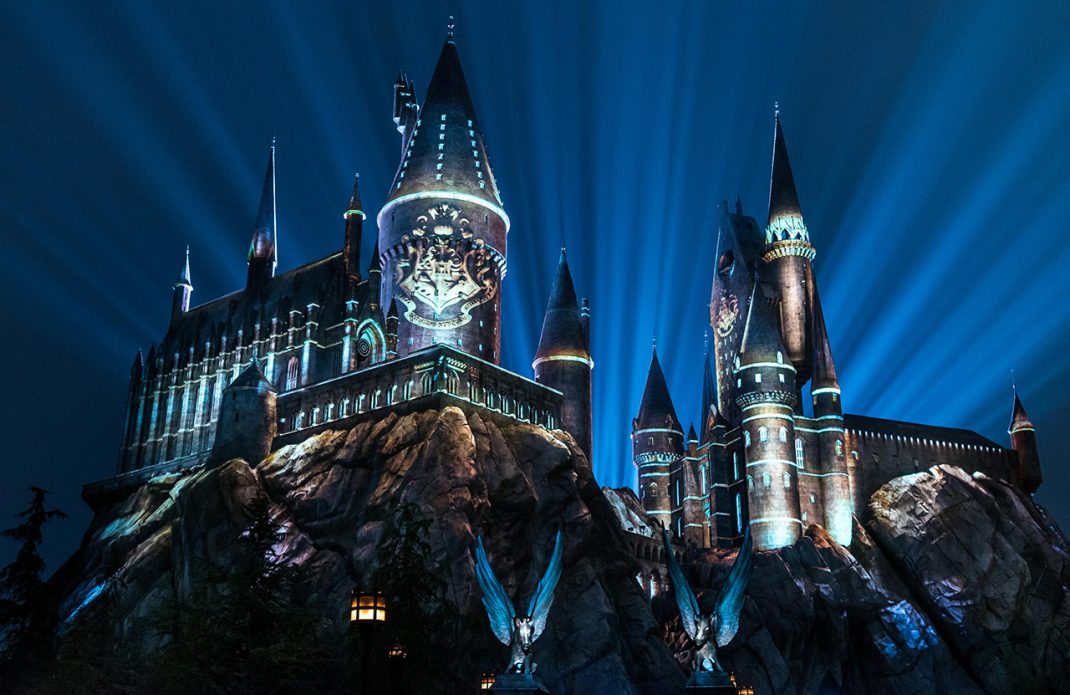 Universal City, CA, June 23, 2017 – Beginning this evening, guests are invited to see “The Wizarding World of Harry Potter” in a whole new light when Universal Studios Hollywood debuts its all-new “The Nighttime Lights at Hogwarts Castle,” featuring a dazzling light projection experience against the backdrop of Hogwarts™ School of Witchcraft and Wizardry.

As night falls on Hogsmeade village, “The Nighttime Lights at Hogwarts Castle” will shine brightly with an awe-inspiring spectacle that showcases the four houses of Hogwarts: Gryffindor, Ravenclaw, Hufflepuff and Slytherin and culminates with awesome beams of lights that fan into the night sky.

The colorful state-of-the-art light display and special effects projection, designed to dance across the stunning Hogwarts castle, will be accompanied by a special musical arrangement created by Academy Award-winning composer John Williams based on his original scores composed for the film series. The musical arrangement that will emanate in a surround sound environment was conducted by prolific arranger William Ross and recorded by the London Symphony Orchestra in London.

“The Nighttime Lights at Hogwarts Castle” will take place multiple times a night during its summertime run.

The architecturally stunning land also includes the incredibly captivating and highly acclaimed “Harry Potter and the Forbidden Journey” thrill ride, now enhanced with 4K-HD and ride film projecting at an astounding rate of 120 frames-per-second for an even more immersive glimpse into Harry Potter’s world, as well as “Flight of the Hippogriff™,” Universal Studios Hollywood’s first outdoor family coaster.

“The Wizarding World of Harry Potter” resonates with immense detail, inviting guests to revel in J.K. Rowling’s Wizarding World with the opportunity to enjoy authentic food and beverages at multiple locations, including Three Broomsticks™ and Hog’s Head pub, as well as the Magic Neep and Butterbeer™ carts.