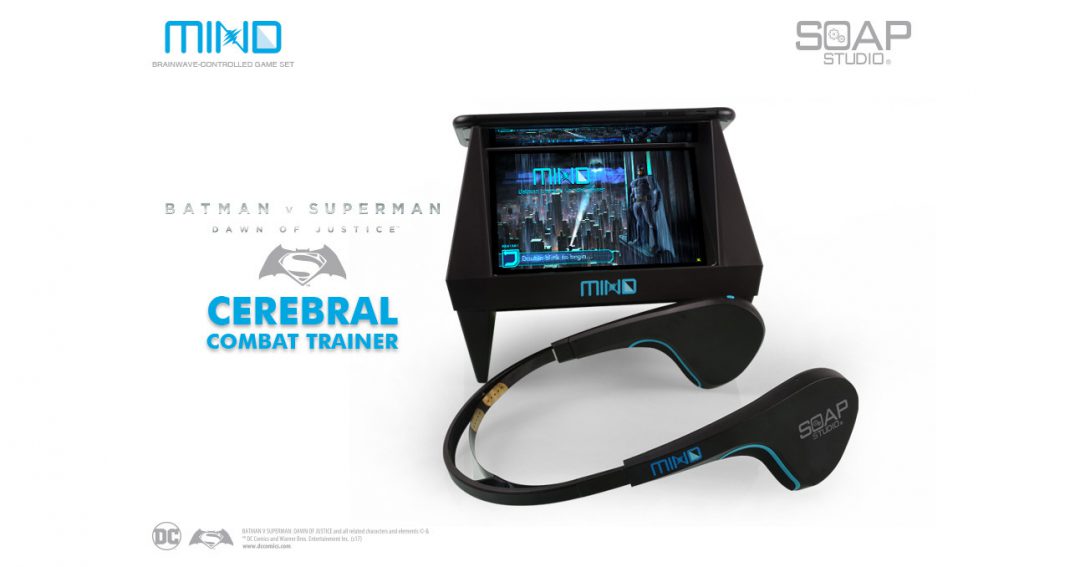 This is not my first time to put sensors on my head used a mind control headset to play a game.  In fact it isn’t even my second.  The first time I saw a mind control game device was at a trade show and it had tons of wires hanging off of it. Also, try as they may, it was hard as heck for participants to successfully complete.  Although it looked interesting, I walked on by to head to an appointment elsewhere. When I finally did check one out, it was a home mind control game kit and, using just my thoughts, I was supposed to keep a ball motion. I found concentrating like crazy made the device work… unfortunately I also found if I just crinkle my eyebrow really heavily and didn’t concentrate at all it would go up.  After this disappointment, I was leery when the next one arrived in the mail, a Star Wars branded device. My hope in mind control gaming was restored because of this, and I was really excited to try the BATMAN MIND Cerebral Combat Trainer from Soap Studio.

The BATMAN MIND headset has a terrific design because of several factors. The headset unit is lightweight, has adjustable contact points, and has large contact pads which allow for high levels of sensitivity in picking up the wearer’s brain waves.  The hologram shown on the display unit is only one sided, which is a bit of a bummer, but the whole setup is far smaller and easier to travel with to make up for that.  The hologram is actually a very old stage technique known as a “Pepper’s Ghost” which is the same effect used in the ballroom with the dancing figures at the Disneyland’s Haunted Mansion.  The headset unit is charged via USB then communicates with your phone which is the only other electronic element via Bluetooth.  You can also choose to leave the display unit at home and just play the game with the headset and your phone.  The game itself is free on both iOS and Android app stores, and the game is free – though it is useless without the hardware.

I tried at first with the full apparatus and found the hologram was clear enough to play the game but, even with the brightness cranked all the way up, text was difficult to read.  When I first heard that the game used eye blinking I was afraid that it might become a blink-fest, but it works really well.  Drifting up and down by concentrating and relaxing was hard but it was satisfying when completed.  I thought it would just be battles but they test how you use your mind to hack explosives as well as drift and fight and maintain targeting and well. Without giving too much away, this game was leaps and bounds beyond the previous mind control game attempts.  There are a large variety of tasks for you to juggle, and it really feels like you are training your mind.  As a result BATMAN MIND is an terrific game that actually help kids to learn to concentrate more, help the elderly stay cognitive and just keep the general user to have a sharper mind.  It has hidden characters, 3 levels of difficulties and 30 challenges making it so it has replay not just to sharpen your mind but to see if you have what it takes to get through on a tougher difficulty.  Plus I bet you will want to unlock all the hidden characters.

Since it is a relatively straight forward app that you download and the important part is the hardware you can come out with sequel games or learning programs to keep you sharp and keep the very handy hardware from collecting dust on the shelf. I am hopeful that Soap Studios will come out with additional games to use the headset.

What I hope is that, eventually, they pair mind control up with VR headsets so that you can interact more freely and naturally with your environment.  Let’s say in the VR simulation the phone starts ringing.  Using the VR you look at the virtual phone then using your already trained brain signals from programs like Batman you pick the phone us and talk to someone by just a quick thought.  Maybe in the VR game you are backing down the hall and a zombie is creeping toward you. You lift a gun with your mind, aim with the VR then shoot by blinking.  Basically the Batman Mind is great but I see it’s possible future, if used with other technology to be amazing – but, I digress…

BATMAN MIND is the real deal when it comes to mind control gaming, giving you fun challenges set in the DC universe with characters you know and want to play with.  I think there is a good chance that the brainwave-powered gaming is part of the future of gaming, learning, and general cognitive longevity.  Plus you get to play Batman.  And everyone know the old saying: Be yourself, unless you can be Batman.  Then be Batman. With your mind. For about $130 dollars!