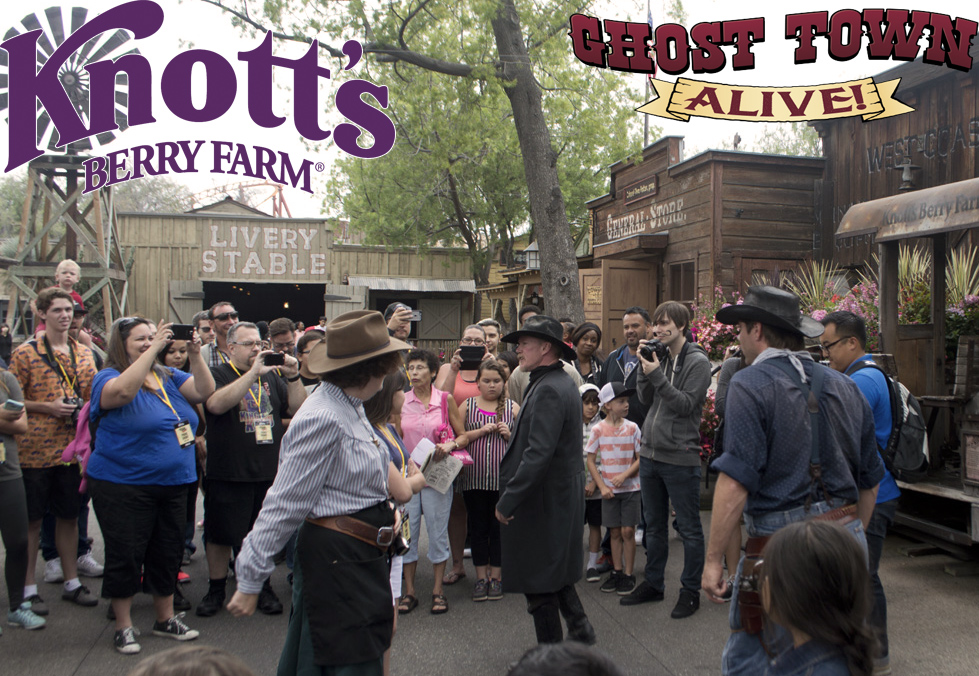 Buena Park, Calif (May, 2017) Starting May 27th through September 4th, Ghost Town Alive! returns to Knott’s Berry Farm for another action-packed summer complete with bandits, cowboys, robberies, judges, a good ol’ western hoedown, and much more! Guests can visit the beloved town of Calico and experience an authentic western adventure by becoming a star in this summer’s story of the Wild West, where the power to unlock adventures is in the hands of every guest.

This summer, the story continues a year after the notorious Mayfield Gang escaped the custody of Sheriff Wheeler. Word around town is the Mayfield’s have been spotted back in Calico and the townsfolk are in need of some help in capturing the bandits and keeping the town safe. Ghost Town Alive! will offer guests a firsthand experience to play an important part in this unfolding story of the wild west, with specific tasks and activities and an essential role as an honorary citizen of Calico.

“Ghost Town Alive! has taken Knott’s summer entertainment and the idea of ‘playing in a theme park’ to a whole new level. Guests of all ages will have the opportunity to not just interact with the citizens of Calico, but will have the ability to influence how the story takes shape,” said Jon Storbeck, General Manager of Knott’s Berry Farm. “Our Entertainment team has been working all year in developing new storylines, adding new characters and activities that make up the lively town of Calico”.

Along with the return of Ghost Town Alive! The park will also debut Snoopy’s Magnificent Magical Revue, a jaw-dropping magic show starring the World’s Most Famous Beagle, Snoopy and showcasing the mystifying and amazing magic of Magician Extraordinaire Greg Wilson!  The whole PEANUTS GANG will amaze and confound with their magical exploits and lavish musical production numbers in this family friendly show!  And who knows, guests might find themselves part of the act!  Snoopy’s Magnificent Magical Revue will mesmerize on select dates, staringJune 10 – August 20 in the Charles M. Schulz Theatre. (Dark Wednesdays)

The circus returns to town! The renowned “Traveling Circus” returns for another season of exhilarating performances. Set on the Calico Mine stage in Ghost Town, come witness a spectacle; see awe-inspiring stunts, and death defying acrobatics in “Circus of Wonders.” The astonishing 30 minute spectacular will be action packed with all-time favorite circus attractions such as the Trapeze, Tightrope, Aerial Acrobatics, Trampoline, and of course, clowns, incorporating lighting and pyrotechnics, making this nighttime show a totally unique event! Select dates, June 10 – August 20.

The live entertainment continues with the explosive Wild West Stunt Show and the high kickin’ Calico Saloon Show, all in Ghost Town. At the Wagon Camp Stage, get krazy when Krazy Kirk and the Hillbillies mount their toe tappin’, knee-slappin’, gut-bustin’ country comedy show that will have audiences clamoring for more!  In the evening a group of krazy talented performers will have guests kicking up their heels with vine dancing, a down home jug band and dueling fiddlers and banjos!

Knott’s also invites guests to celebrate Memorial Day weekend, Fourth of July weekend and Labor Day weekend at the park for a special nighttime firework display.  The Buena Park skyline will glow with a brilliant fireworks show on May 28th, July 1-2 & 4, and September 3rd, exclusively at Knott’s Berry Farm.