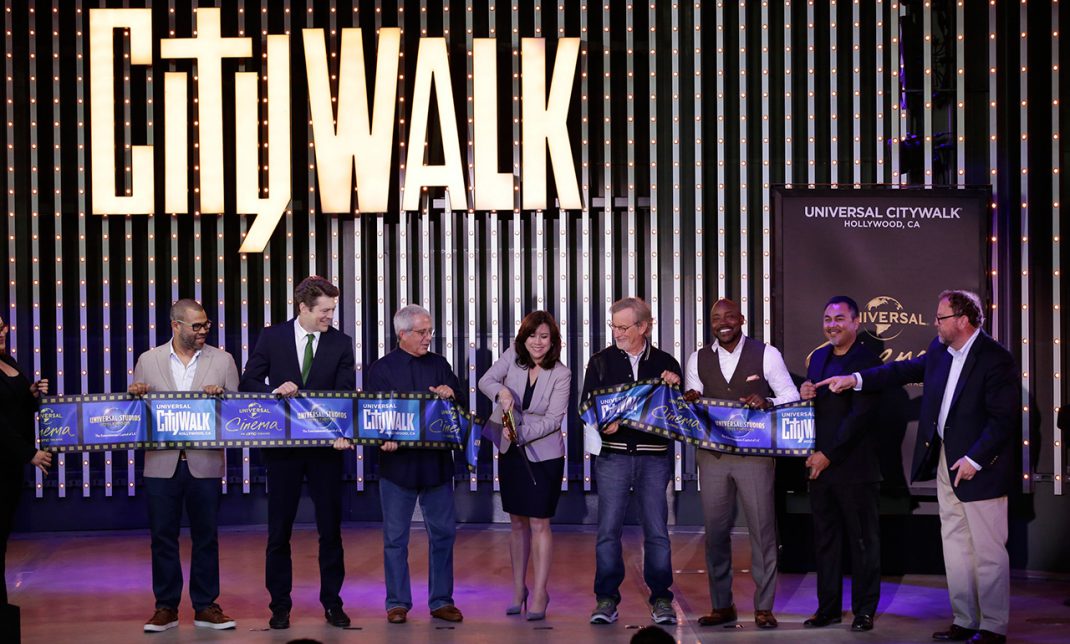 With its proximity to the Universal Studios’ production lot and filming locations for many blockbuster movies, these award-winning filmmakers helped call “action” and shine a spotlight on the Universal Cinema as the place to “see movies where movies are made.”

“The new Universal Cinema is a spectacular place to enjoy blockbuster films and we’re thrilled to have such acclaimed filmmakers join us to commemorate the occasion,” said Karen Irwin, President & COO, Universal Studios Hollywood. “As The Entertainment Capital of L.A., we’ve entertained guests for generations, taking them behind-the-scenes of movie-making and placing them in the heart of the action with our incredible attractions, so it’s only fitting that we create the ultimate movie-going experience giving fans access to a movie theatre where they watch films in Hollywood screening rooms the same way filmmakers do.”

For film buffs, Universal CityWalk has long been the epicenter for fans seeking an environment that matches the excitement of their favorite blockbuster movies. Delivering modern, high-tech elegance and chic sophistication, the renovation of the split-level movie theatre offers a stylish and inviting place that captures the spirt of the glamourous movie studio—complete with screening room quality theatres and ultra-plush reclining seats.

The Director’s Lounge Cocktail Bar—an all-new upscale and stylish second-level retreat, flanked by the upper level theatres—adds a charismatic new dimension to the space for casual pre- and post- movie-going fun.  Beverages served at the lounge can also be taken into the second level theatres.

Each redesigned theatre has been fully upgraded with the most technologically advanced sight and sound achievements. The Universal Cinema represents the first multiplex in the United States to incorporate Christie laser projection, Christie Vive audio sound system and Dolby ATMOS with recliner seating to deliver maximum-impact movie presentations in 18 auditoriums. The installation of new state-of-the art screens, perforated to enable 360 degree audio, complement the overall enhancements.

The recent upgrade to the IMAX theatre features IMAX’s next-generation 4K laser projection and 12-channel sound systems designed to enhance the entire movie-going experience and provide an audience with sharper, brighter, clearer and more vivid digital images than ever.

A box office and guest services concierge is now located inside the venue, with convenient automated box office kiosks situated adjacent to the venue by the “5 Towers” outdoor concert stage. Additionally, movie-goers can enjoy $5 Movie General Parking with the purchase of a movie ticket.

Since 1993, CityWalk has boosted the city’s rhythm through a foundation built on providing memorable entertainment experiences.  With a series of dramatic enhancements currently underway from the introduction of new dining experiences such as the recently opened Jimmy Buffett’s Margaritaville, Voodoo Doughnut, and LudoBird, shopping experiences and visually aesthetic design features, CityWalk continues to resonate as one of L.A.’s most influential lifestyle centers.