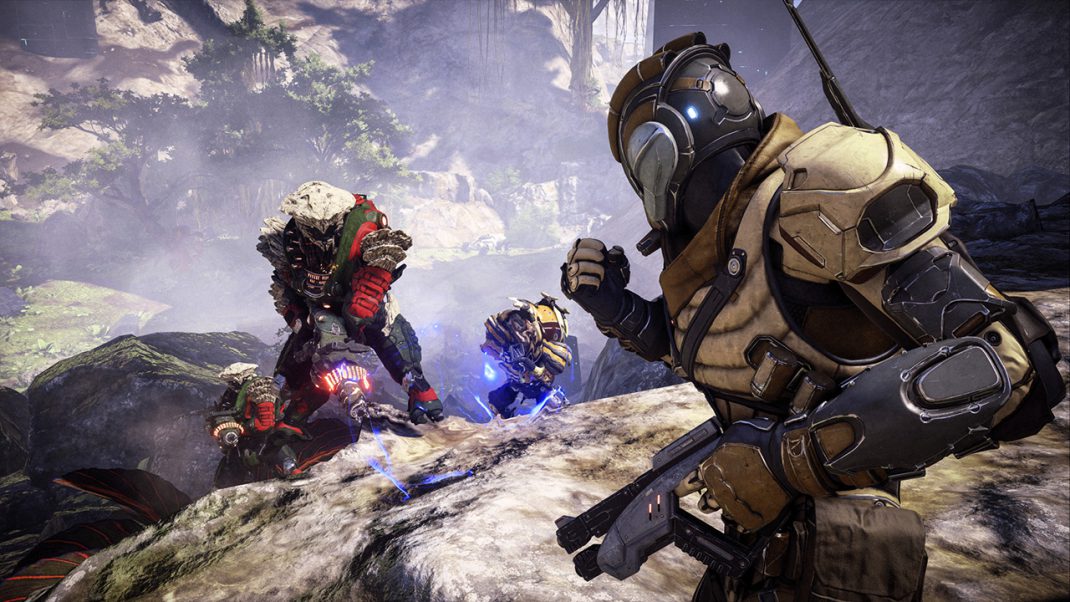 Space is big, like way bigger than any game or any series of games can contain, and that is just outer space, let’s not get started on inner space or aquatic space.  As a result the creators of the Mass Effect trilogy were able to craft three amazing games taking up tons of space with well developed characters and still be able to go… hmm where should we start our next trilogy of games? The Andromeda galaxy isn’t that far away in terms of space distances, let’s go there!  And so it was, Mass Effect: Andromeda, a ginormous game of its own was born!

Cryosleep, it’s how we are gonna get there, pretty much everyone agrees, and they also agree those first poor buggers who wake up are gonna have a hell of a time with it.  They are gonna be cranky, probably not all hot and daisy fresh like Chris Pratt and Jennifer Lawrence. Most would wake up with hard jobs and blame they want to pass off for everything that went on during the “welcome back from hibernation” weeks or months.  So you are the new pathfinder, chosen not by the decided process or the per-ordained individual but because your dad realize his was about to buy the farm and he wanted to hitch you to the tractor load.  Nobody seems genuinely happy about this, the best you get is indifference from a crew member who you helped move a couch.  This sounds like it might be spoiler filled but you actually get this unwanted vibe pretty early in the process, and those who do want you want you to help with stuff you should not be doing when there are so many big items on your plate.  If you are a completionist (I can relate often) this will keep you from some of the important tasks, even if not a completionist you might wonder if one of these quests that seem menial might pay off in the endgame.

There is nothing wrong with wanting to do it all but my suggestion would be to try to do that on planets to start with, the resources and goodwill of getting all those cryo-cranks some terra firma between their toes goes a long way towards the good will up on the tin can.  You still probably won’t get much credit for anything going right but you can at least sneer at the computer/television screen.  When it comes to doing things both in ship and planet side it helps to have played the other Mass Effect games for a learning curve but they are by no means necessary.  I actually played them all and as a result plenty of things came natural and there are still a few things that even going with the tutorials I don’t understand what the heck I am supposed to do.  I know that this game has massive amounts of hours to play it, especially if you get into side missions.

This brings me to something I don’t usually remark on too much and that was how much negative press I was seeing pop up on my newsfeeds for this game.  It made me think the game must be pretty short and I kept waiting for it to end soon and disappointingly.  It just wasn’t the case.  Actually the more I played the better I thought the game was.  There is a difficulty curve, new story line angles unlocking as you go and you have the option to play naughty “Captain Kirk” with any species and sex in the whole game.  You can have heavy effects on what happens in the politics involved with the game or not have any play right down the middle trying to keep things as peaceful as possible.  You can make decisions that will reflect how the whole Andromeda Galaxy views the human species… are we explorers trying to find new homes or a military society that is just as comfortable interacting with others by putting a boot on their neck and a gun to their temple if that doesn’t work?  I am still working at side missions in the game and figure I probably will be for a while but I can tell that there is a lot more to this game than most people have probably given attention to and that would give them the wrong feeling about it.  If you don’t get far enough away from the snarky buggers on the main ship the game feels like a downer and not the fledgling battle of a new hero but rather a scapegoat that can be used to wipe whatever you stepped in off on.  This is the story of one person seeing the potential in another over all the opinions of others and you as the player proving that opinion right.  It’s an underdog story, the kind of thing most of us love (Rudy!  Rudy!) I just don’t think most people let it get to that amazing point.

The graphics and scope of maps and scenic locations are excellent and though there were some pretty brutal glitches and some rather large areas where manual saves are blocked and auto saves are painfully separated for the most part everything goes as planned.  I had one point where I fell through the ground and it chose the moment on the other side of the mapping to auto save (it wasn’t until afterwards I really thought it was funny enough I should have captured it) causing me to go back quite a ways but for the most part it wasn’t too bad that way.  Loading seemed pretty nicely quick when you consider the sheer size of these open world maps and how much detail can change in a short distance so that your health melts off you faster than you can run or suddenly a whole bunch of big bad guys have ambushed you.  Going planet side can be slow but again for a lot of the before mentioned reasons.

My big hope is for some releases with some more planets down the road, ugly planets, bug planets…

Mass Effect: Andromeda I think is a great game and a nice power starter for a new trilogy of games in a new set of worlds.  We have a hero, we have planets, we have aliens… all we need is our towels.