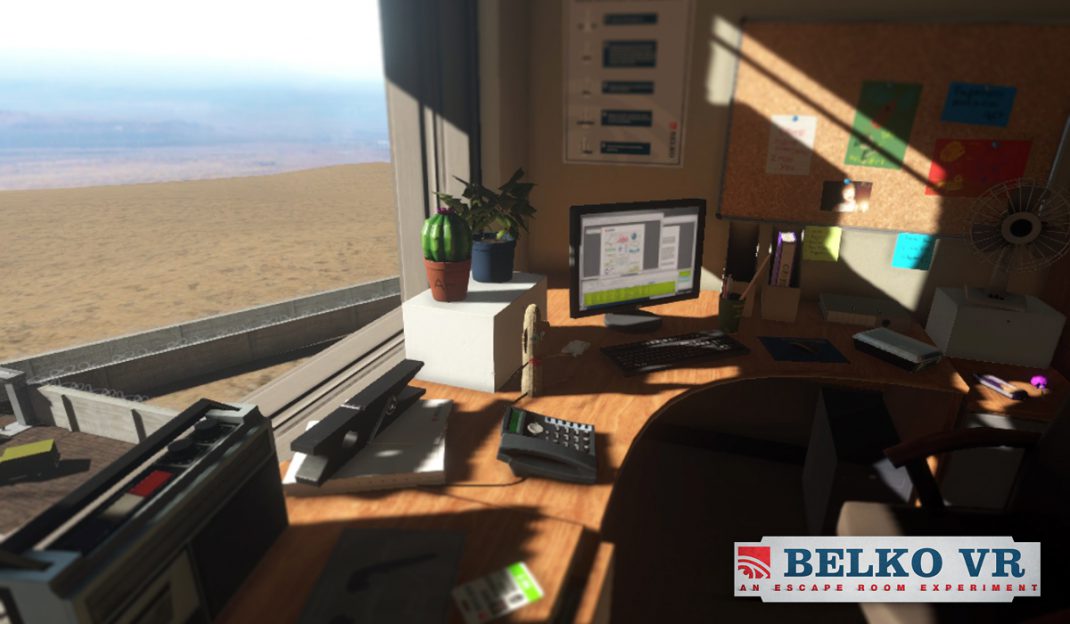 Belko VR – The Escape Room Experience Gets A Trailer

Los Angeles – “Belko VR – The Escape Room Experience” is being released for free, for one day only, March 3, 2017 in celebration of “National Employee Appreciation Day”. The game was inspired by the upcoming horror thriller, Orion Pictures’ THE BELKO EXPERIMENT, to be released in theaters by BH Tilt, on March 17, 2017.

Belko VR – The Escape Room Experience, created by filmmakers David Yarovesky and Dan Clifton, will be available to play on HTC Vive and Oculus Rift headsets through the Steam Platform.
Exploring the themes in THE BELKO EXPERIMENT, the Belko VR – Escape Room Experience provokes the question: “What does it take to survive at work?” Players are prompted to solve a series of challenging puzzles in order to escape from their office before a microchip in their head explodes.

“We felt that we had a unique opportunity to do something a little crazy by taking the core idea of being trapped in the Belko Industries building and distilling that down to a Roomscale experience,” states Dan Clifton, who co-produced the film and also developed the game. “Players will become a Belko employee and be immersed into a fight for survival. It’s fun, at times threatening and scary and fully interactive.”

“Because I was there for the shoot in Bogota, Colombia and worked extensively with director Greg McLean and the cast and crew, it felt very natural for us to extend the experience and story into a VR game. The film leaves you with the question, “What would I do?” and we knew we could have some fun building that into a VR experience.”

David Yarovesky, who also served as a post-production consultant on the film, is the co-creator of the game. “Having been an extremely early adopter of Vive, I was thrilled that Orion Pictures and BH Tilt were bold enough to allow Dan and I to run with this idea. Other films have done 360 Video experiences, but this is a truly interactive standalone playable game set in the extreme Belko universe.”

Yarovesky added, “We were tired of VR experiences that felt like tech demos. We wanted to make something that was fun and engaging and set a new bar for how VR and film can work together.”

James Gunn said, “The Belko VR – Escape Room Experience is scary as hell with lots of insane puzzles and moral choices. As an active gamer, I’m so excited about where VR is going, and this is a step in the right direction. David Yarovesky and Dan Clifton did an amazing job capturing the film’s unique tone and the game is just as twisted and fun as the movie.”

John Hegeman, President of Marketing of BH Tilt noted, “The Belko VR – The Escape Room Experience is complete insanity and to have the game available for free on Employee Appreciation Day is an incredible treat.”

To bring their vision to life, Clifton and Yarovesky partnered with developers Paper Crane Games out of Los Angeles, CA, who recently developed the Call of Duty Jackal Assault VR Experience for Playstation VR.

Clifton and Yarovesky previously collaborated on The Exorcist 360 Experience for 20th Century Fox Television in the fall of 2016.

ABOUT ORION
Orion, an arm of MGM, is focused on distributing films across multiple platforms.