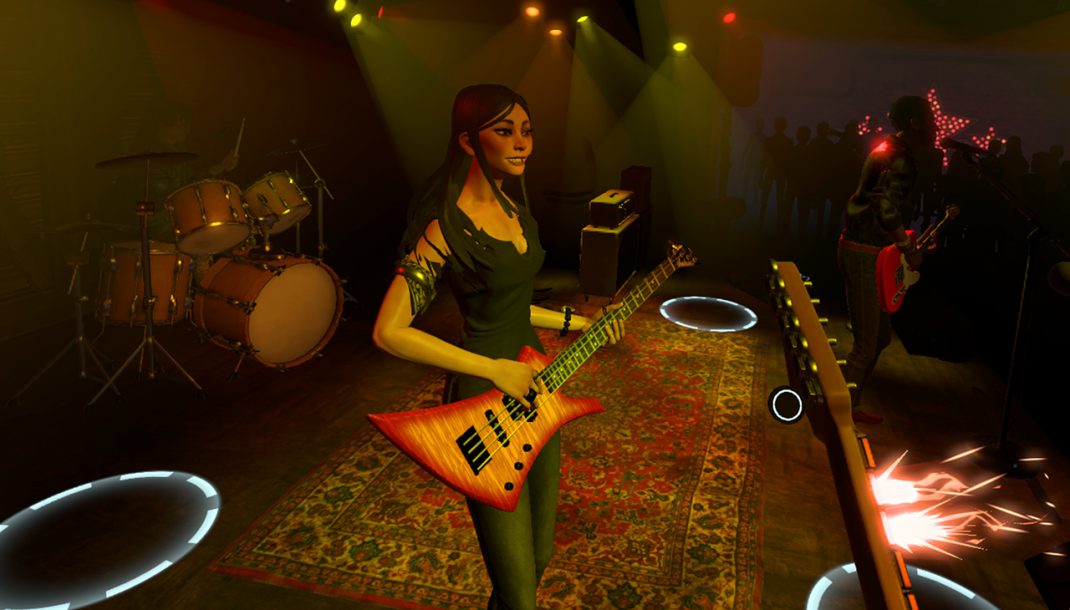 Boston – February 6, 2017 – Harmonix Music Systems, Inc. announced today that Rock Band™ VR, the highly anticipated VR entry into the Rock Band franchise for Oculus Rift, will be released on March 23, 2017. Pre-orders for the Rock Band VR Guitar Controller Bundle open today. Available in limited quantities on Amazon, this pre-order bundle features a digital code for Rock Band VR and a wireless Rock Band Fender® Stratocaster® guitar controller for $69.99. This pre-order bundle is perfect for Oculus Rift owners without a Rock Band guitar who want to be among the first to experience Rock Band VR.

Gameplay
If Rock Band VR’s classic mode is about the pursuit of a note-perfect studio recording, Rock Band VR’s performance mode, illustrated in the above gameplay video, represents the creative freedom of a live concert where no two performances sound exactly the same. In this mode, players experiment with different chords, notes and strum speeds to develop their signature sound and make each performance their own. It’s a completely new kind of music gameplay, it’s perfectly suited to VR, and it’s unlike anything else Harmonix has ever created.Underpinning the gameplay is an amazing sense of presence you can only get in VR. From the moment the player takes the stage, they’ll experience what it’s like to perform in front of sold out crowds – sweaty palms and all. To deliver this fantasy, Rock Band VR focused on the details – from working effects pedals to interacting with your bandmates to the ability to use your guitar to bang on the drummer’s hi-hat cymbal. It’s an incredibly immersive experience.While the gameplay may have changed, scoring and leaderboards remain as central to the Rock Band experience as ever. Players will need to develop a mastery of Rock Band VR’s new gameplay mechanics if they want to claim a top spot. Chaining together chords and notes into musical phrases and combos will earn players points, while timely deployment of overdrive and signature rock moves, like head banging in time to the music, will trigger multipliers to boost scores even further, earning more stars. It’s a deep, complex system that rewards both technical proficiency and creativity.Traditional Rock Band gameplay will have its own dedicated leaderboard at launch in Classic Mode.

And that’s just the beginning. With 60 songs from legendary artists and upcoming acts on the verge of breaking out, there’s something for everyone.

About Rock Band VR
The first VR entry into one of the best-selling and most beloved game franchises of all time, Rock Band VR will pioneer an entirely new type of musical gameplay on the Oculus Rift. Freed from the limitations of beatmatching, Rock Band VR encourages players to experiment and develop a signature sound, delivering unique renditions of their favorite songs. Complete with leaderboards, a narrative campaign and classic mode, Rock Band VR will have something for everyone when it launches on March 23, 2017.
For more information on Rock Band and to stay up to date with the latest news and announcements, head over to the Rock Band blog or follow @RockBand on Twitter for updates.

About Harmonix Music Systems, Inc.
Harmonix Music Systems, Inc., based in Boston, MA, and established in 1995, is the leading developer of groundbreaking music-oriented video games. Harmonix was founded to invent new ways for non-musicians to experience the unique joy that comes from making music and has pioneered music and rhythm gaming in the US. For more information, please visit www.harmonixmusic.com.