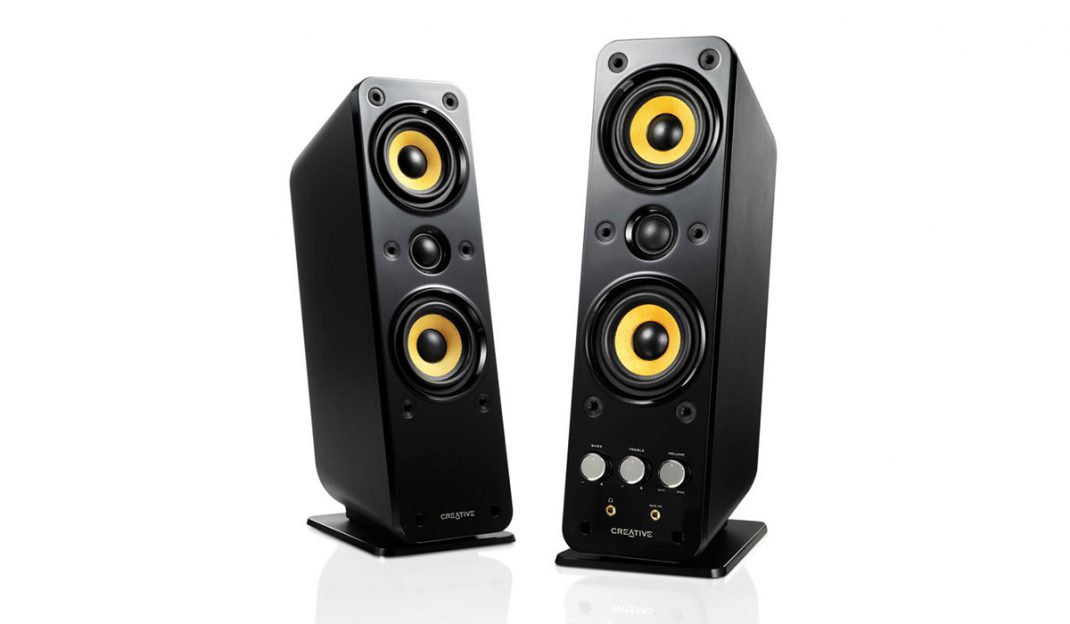 In looking for some new desktop speakers (my older set ended up taking a nosedive and breaking), I looked through a great many potential replacements. Having used several types of speaker systems in my gaming lifetime, I was hoping to reduce the physical footprint of the audio system as much as possible. My office is not that big and I don’t need to have gigantic speakers everywhere. Then again, I also did not want to sacrifice sound quality for this exchange. My answer came in the form of the Creative Labs GigaWorks T40 Series II desktop speakers.

The GigaWorks T40 Series II speaker system is made up of two free-standing satellite pylons – each containing three types of speakers. There is a cloth-domed tweeter unit for higher-end frequencies as well as two fiber woven cone drivers for low and mid-range sound. Capping these drivers off is a resonance chamber that helps funnel low-end sound out of the pylon for a subwoofer-style effect. The speakers require an AC power source – the adapter is included. Some have complained about this requirement but those detractors need to understand that power is required to send the audio signals through the six speakers.

These weighty satellite units are more than a match for a full 2.1 sound system and it saves you the extra space being taken up by a dedicated subwoofer! Using Tokyo city planning logic, Creative Labs built upwards, not outwards, and it is a very successful outcome for their efforts.

I have used the Creative Labs GigaWorks T40 Series II speakers for easy listening music all the way to first-person shooter games. When using speakers for Mp3 enjoyment, I usually start with showtunes. Hamilton, the latest craze in musicals, plays wonderfully on these speakers. Having the bass and treble control knobs next to the volume/power knob is brilliant and allows me to have direct control of the highs and lows, without getting bogged down in all the tweaks available via an equalizer. Moving into the hard stuff, I loaded up Dragonforce and blared out Operation Ground and Pound and reveled at the clear separation of highs and lows, thanks to the GigaWorks T40 Series II’s multi-driver system. Finally, I ran an assortment of video games while using the speakers. Master of Orion was no challenge for the speakers and the adrenaline-fueled explosions of Call of Duty: Infinite Warfare came through like gangbusters. The system us truly exceptional – especially at its price point of $124.95 on Amazon.

Overall, the Creative Labs GigaWorks T40 Series II speaker system is a terrific option for those of you in need of powerful desktop audio that won’t break your bank account. The three different sound sources per satellite provide a wide range of frequencies that you would normally need several speaker units and a subwoofer to equal – especially in a home office environment. The GigaWorks T40 Series II speaker system is a great choice for gamers and audiophiles in their home office, dorm, or bedroom.