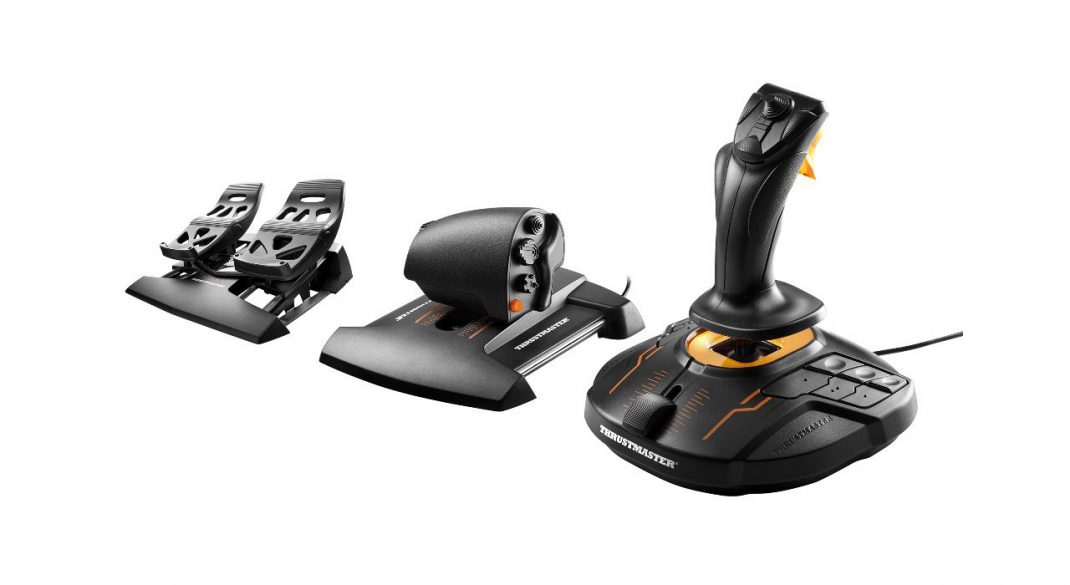 Rennes, November 22, 2016 — Thrustmaster is thrilled to announce that it will now be offering a full set of next-generation flight controls, with its new T.16000M FCS Flight Pack. This exciting new pack includes the T.16000M FCS flight stick, the TWCS throttle and the TFRP rudder pedals system. The T.16000M FCS Flight Pack features cutting-edge technologies such as H.E.A.R.T (HallEffect AccuRate Technology™) on the flight stick, and S.M.A.R.T (Sliding Motion Advanced Rail Tracks) on the throttle and rudder pedals, for ultra-realistic flight experiences. 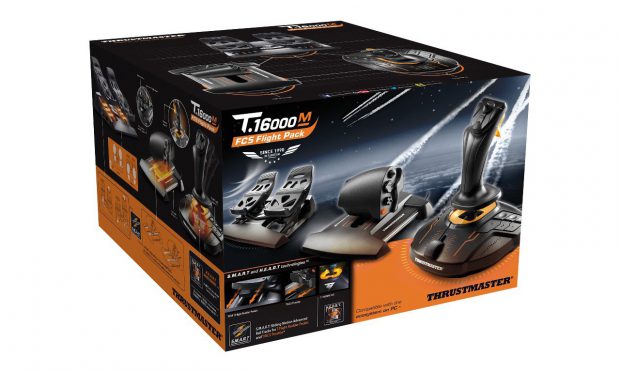 The T.16000M FCS flight stick provides 4 independent axes, including a twist rudder controlled by rotating the stick. It ensures high-precision performance – perfectly responding to every movement made by the pilot – by way of its integrated H.E.A.R.T* HallEffect AccuRate Technology™ via 3D (Hall Effect) magnetic sensors, in particular. The numbers speak for themselves: the T.16000M FCS flight stick makes possible a level of precision 256 times greater than that provided by current systems (16-bit resolution, for a mind-blowing 16,000 x 16,000 values in total!). The stick includes 16 action buttons with “braille”-style physical button identification (particularly useful in virtual reality games), one 8-way Point of View (PoV) hat switch, and an ergonomic trigger.

The T.16000M FCS Flight Pack also includes a throttle featuring a particularly innovative design: the TWCS Throttle. The TWCS is equipped with S.M.A.R.T technology, which consists of an exclusive slide rails system for perfectly smooth and precise throttle movements. The TWCS Throttle offers 5 axes (with 16-bit resolution – for a total of 65,635 values – on the throttle’s axis), 14 action buttons, one mini-stick, one toggle rudder, one rotary radio antenna control wheel, and a connector for the TFRP rudder pedals system.

The S.M.A.R.T technology incorporated into the throttle also features in the final hardware component of the T.16000M FCS Flight Pack: the TFRP Rudder Pedals. This rudder employs a unique system of 4 slide rails for super-smooth, high-precision sliding motions. A self-centering rudder axis strikes the perfect balance between smoothness and resistance for re-centering. What’s more, the pedals’ heel-rests are removable: with them removed, the pilot controls the rudder using the ball of his or her foot, heel on the floor; while with the heel-rests in place, the pilot can rest his or her entire foot on the pedal. This versatility is a definite advantage in terms of adapting to different piloting styles. The base of the TFRP Rudder Pedals is large and on an incline, for enhanced comfort and stability. The differential braking function is facilitated by way of the 2 differential brake pedals (each measuring 10 inches/25 cm – 12/45 shoe size) featuring a rounded central pivot with a central grip. The pedals’ pivot angle has a 15° range of travel: on an incline for deliberate activation, avoiding inadvertent activation when using the rudder.

To this comprehensive pack of three hardware devices, Thrustmaster has added a software element with an amazing amount of power and usefulness: T.A.R.G.E.T, which stands for Thrustmaster Advanced pRogramming Graphical EdiTor. T.A.R.G.E.T lets users combine the pack’s different hardware components so that they are recognized as a single USB device, for example – amongst many other possibilities. Each component can be configured according to the needs of the user and/or of the game being played, all via the drag and drop principle for more intuitive use.

Thanks to these many great features, the T.16000M FCS Flight Pack has been named an Honoree in the Gaming category for the Innovation Awards at the upcoming CES – the world’s largest trade show dedicated to innovation and technology – taking place in Las Vegas from January 5-8, 2017.