SteelSeries makes gaming gear with longevity and versatility, from mice to keyboards to headsets.  So I was more than happy to give their latest entry level headset, the Arctis 3 7.1 Surround Gaming Headset, a run through its paces.  Does it meet up to the expectations of entry level gaming headsets?

First off we announced the Arctis line of headsets a while back and there was a comparison chart to give readers a general idea of the differences between them and some of the standout features that all three possess. 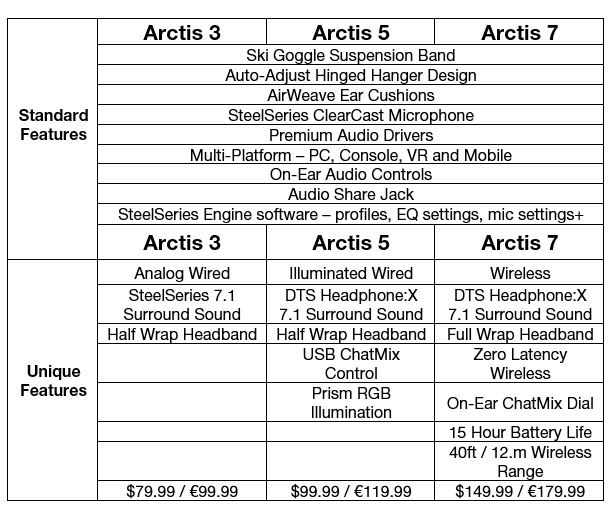 All three have ski goggle suspension bands which, at first hearing, might be confusing but that just means that the Velcro adjustable bands like the ones that are used on many ski goggle models are the same type that are used on here with many designs to choose from and interchange as a result as well as maybe even using the same design as your favorite set you use when hitting the slopes. 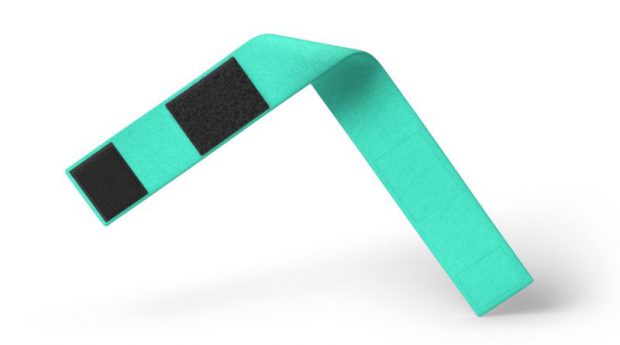 This adjustable design instead of a static stretch one allows a consistent fit no matter how much you use it and the ability to clean it if it begins to get a bit dirty which built-in bands tend to lose elasticity over time and apply the pressure of the stretching to your head as well as just being wipe cleanable. 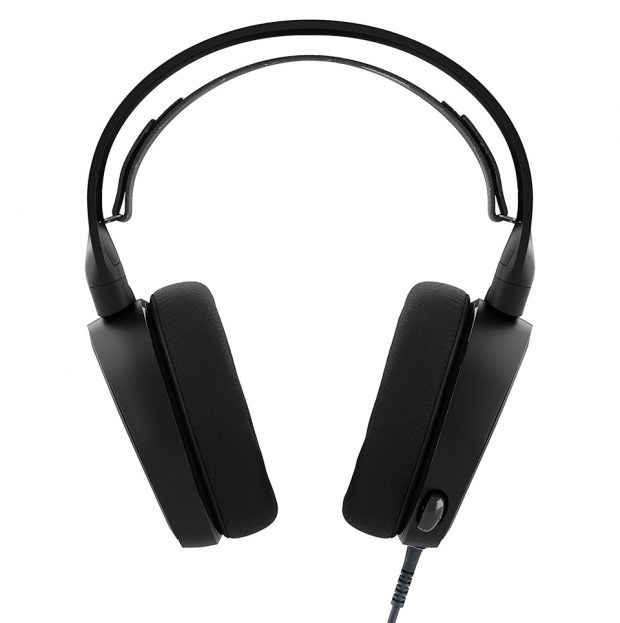 Adding to the comfort and the sound isolation is the AirWeave Ear Cushions which are so comfortable they feel like memory foam for your ears.  I recently did an extremely long, almost all night gaming session and had the headsets on the entire time and they never got uncomfortable to the point I had to remind myself they were on so that I didn’t talk too loud to myself and or head to the bathroom with them on (they have a long cord with the included extension but not that long).  On ear audio controls of both volume and mic on/off made it so that if I did need to listen for a sound I could turn it down or with the cups I can turn both sideways if I need to which is great to listen to someone or to set the headser flat down on a desk.  When I didn’t feel like wearing them this came in particularly handy to make them double as speakers so that I could still hear stereo sound on the desk. 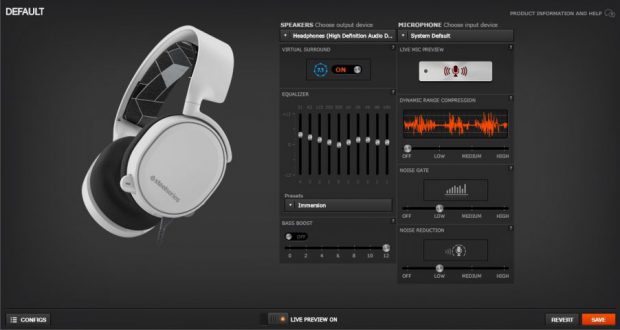 Like the other Arctis headsets when wearing the Arctis 3 you get 7.1 surround sound you just get it with SteelSeries version instead of DTS which is no doubt a cost saving tool while still maintaining the sound directional ability that you would want in most FPS games in particular. At the end of the day they are also nice just to close your eyes and listen to some music or atmospheric relaxations sounds and SteelSeries 7.1 Surround Sound is solid enough that it would probably be hard to tell it from DTS.

One of probably the weakest points on entry level headsets is the microphone quality. This is a problem in general with most except the highest end headset systems usually so one of the most notable parts of the Arctis series has to be the SteelSeries ClearCast microphones.  Located on a retractable, very flexible boom the microphone is encased in a very sturdy housing and is designed with a noise cancellation system built-in that also works in tandem with audio software. The clarity is surprising, with only a little bleed from the room ambient noise.  They are definitely up to the task of team chat or Twitch broadcasting and depending on your perfectionist level they would probably due for YouTube videos.  If you are going for a walk with them plugged into your phone SteelSeries ClearCast system is handy, since all you have to do is pull out the practically hidden boom and take your call.

In my case I have nerve issues and other medical issues that prevent me from being able to hold a phone up to my ear for long periods of time.  This way I can set this headset up to my cellphone and be able to carry on 2 hour catch up sessions with my mother who has hearing issues and has a hard time sometimes understanding me if there is too much background noise. It really is easy to change between setups, since it has two types of plugins on the headset it is literally a matter of changing cables. 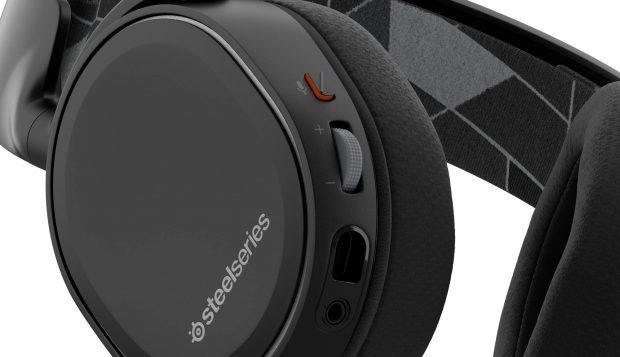 When it comes to the headset there is really only one question and that is whether or not to spend another $20 and go from entry level to mid-range, which when you consider the small amount of money difference does come into play. I haven’t tested the Arctis 5 (hopefully I will get the opportunity soon, you never know) but on the list above it seems to give you a lot more for that little amount, DTS Headphone:X 7.1 Surround Sound (probably not that noticable), Illuminated Wired with Prism RGB Illumination so that you can change the glow color of the headset which has a nice illumination ring, LED indicator on the mic, and probably one of the biggest things the USB ChatMix control that allows you to increase your chat levels if you have a soft speaker without blowing your eardrums out by the game on the fly.  It comes down to if you think you would use those features, if you don’t find yourself wishing to adjust chat much or like light up headsets then you might as well save your money and go with the Arctis 3 which has much more than the usual entry level mics would ever aspire to add on.

The SteelSeries Arctis 3 is one of the most impressive entry level headsets to ever hit the market giving many mid to high end features at a more affordable price.  This headset will work for you universally around the house and on the go, the only question being whether you want the next model up with a few more bells and whistles for just a few more dollars.
[easyreview title=”Arctis 3 7.1 Surround Gaming Headset Score” cat1title=”Overall Score (out of 5)” cat1detail=”” cat1rating=”4″ ]