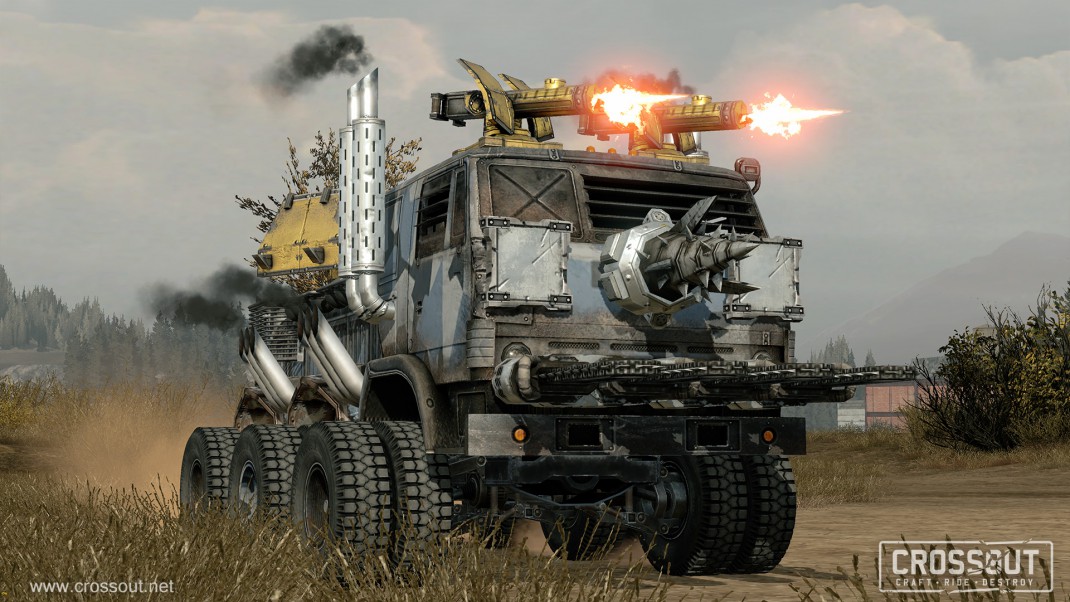 (MOSCOW, RUSSIAN FEDERATION) – August 24th, 2016 — Award-winning developer and publisher of smash hit, War Thunder, Gaijin Entertainment and Targem Games development studio today announced that their new team-based vehicle combat MMO Crossout is now available on Steam Early Access for PC. Steam players will get a chance to join the Closed Beta by buying the Early Access Pack ‘Westland Warrior’ which includes the ‘Bloodhound’, a unique armored vehicle equipped with two powerful ‘Sledgehammer’ shotguns, 2000 in-game coins, featuring an exclusive character portrait and special dark-red paint. All pack content will be available in-game immediately and at the end of Closed Beta it will be reset and reassigned to the account, with the start of free-to-play Open Beta.

“We are delighted to launch Crossout on Steam through Early Access and continue to build our vocal and collaborative community before Open Beta starts”, said Stanislav Skorb , CEO of Targem Games. “Closed Beta players help us shape the direction of development to build the experience that the community demands.”

Scavengers are willing to fork out a tidy sum to any mercenary who ensures safe passage of an armored truck. Players need to follow the truck and defend it from other scavengers and help it cross the map successfully. The map was created especially for this mission with a long route that has almost no turns. Enemies will be attacking the convoy along the way. In the middle of the map there is a radar station, which is a perfect place for an ambush. The main clashes will be waiting for players there. Reward for this mission depends on the distance players can pass.

Heist
In this mission, players will try to grab some goodies from a settlement based in Terminal-45 and take it to the evacuation spot. Here players will face not only the enemies which can appear from everywhere, but turrets as well, as they attack a well defended settlement. The map is like a giant labyrinth, with rubbish dumps, garages, living spaces and transport routes all scattered around the territory of the former port terminal. The heist attempt also has a time limit so failing to complete it before the timer ends means losing the round.

Bringing the total number of maps to 10, Map Control 17 is the latest addition to the game. An open and spacious map, it offers a lot of fun for long range weapons lovers and high speed drivers. Since there is no place to hide for a substantial amount of time, the only way to survive is to be the first to attack the enemy. Be quick, be unpredictable, be desperate – this map indulges brave scavengers. Sneak around destroyed radar dishes, hunt for lonely drivers, and watch your back. Someone can be hunting you at the same moment!