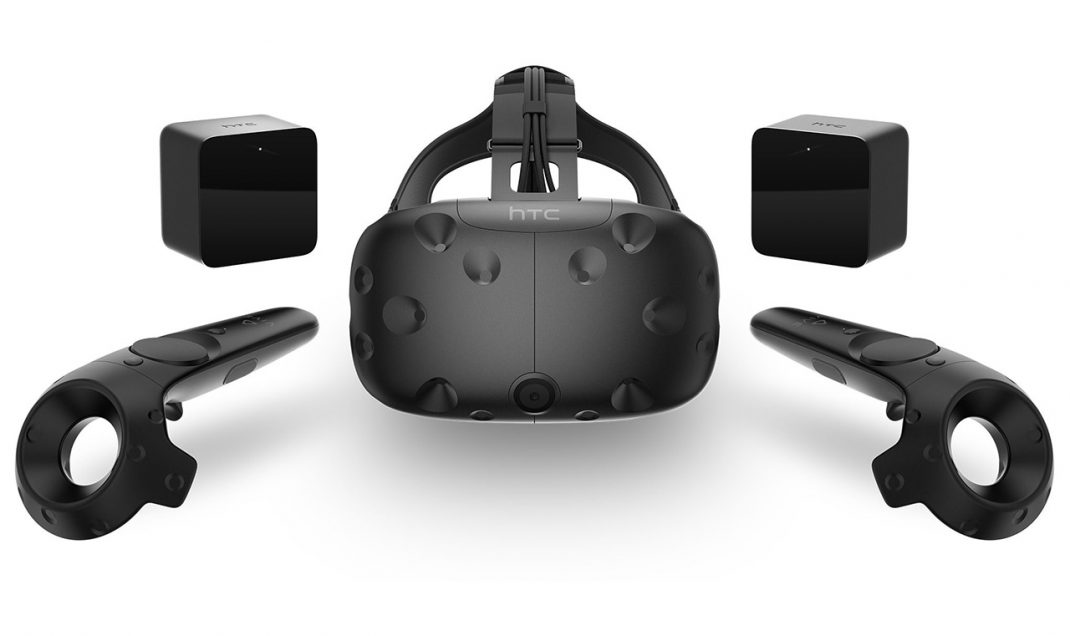 Housed in very thorough packaging, we removed all of the components of the HTC Vive VR system. Upon seeing the small USB pass-through box, two sensors, and all the cabling, we were worried as it looked quite complicated. Thankfully, setting up the HTC Vive is anything BUT complicated thanks to its setup software, which literally walks you, step-by-step, through what to connect where and when to do it. 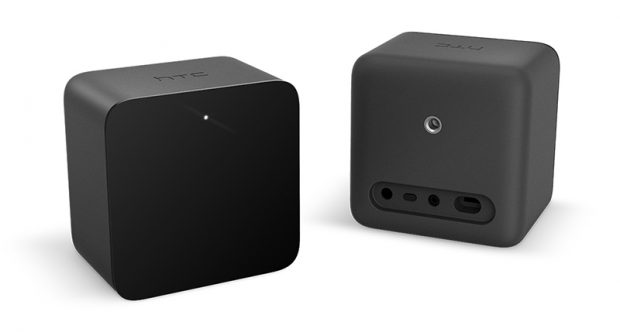 The two sensors, or “lighthouses”, get mounted above the play area in opposite corners of the space (wall screws and drywall anchors are included). They only need to be plugged into a wall outlet via two included adapters. They do not need a wired connection to your computer to function, which is great! They do include an optional sync cable which allows to you connect the sensors together in spaces where line of sight is an issue (they need LoS with each other to sync up their sensor data), but we didn’t need to go this route.

Finishing setup, we powered everything up and Steam VR started automatically (I LOVE the integration with Steam). There is a separate HTC Vive environment but the integration with Steam is where it’s at for this gamer. Steam will run a first-time room setup application that allows you to setup your play area and style. In this, the HTC Vive can be configured for sitting/standing or room scale modes.

Sitting/standing is what most VR headsets do these days – but they Vive leaps ahead of the pack with room scale mode. In this mode, you are able to walk around a play area and more immersively interact with your virtual environment. The play area can be pretty large, and my 6ft x 6ft room was actually about the minimum size for the setup process. 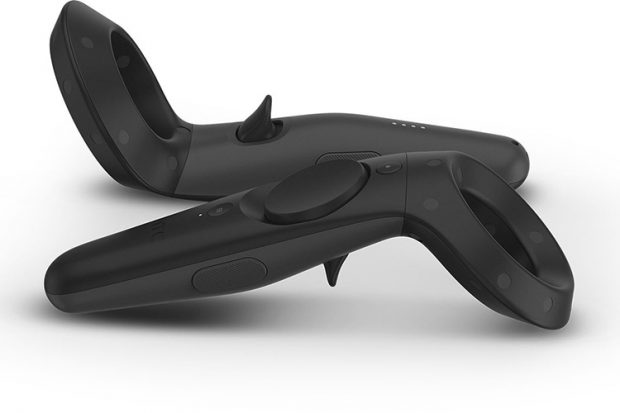 After setup, I decided to start up some VR titles that I had previously downloaded via Steam. The first was Trials on Tatooine, a Star Wars themed VR demo. In the demo, you have to do some maintenance on the Millennium Falcon and even get to use a lightsaber to deflect blaster bolts. Using the two motion controllers to manipulate objects in VR space is simply outstanding. The feedback built into the controllers do a great job of syncing up with your virtual input to give your brain the impression of “hitting” a VR object.

The moment I ignited the lightsaber was one I shall never forget. Ever since I saw the original Star Wars film, I wondered what it would be like to wield one of the fabled weapons of the Jedi. Holding the saber in my hand and rotating it in front of my face, it felt like I was holding it for real. The sense of scale and presence are perfect. I also discovered that I apparently have NO Force Sensitivity whatsoever! I can’t deflect blaster bolts to save my life. I was more like Finn in The Force Awakens. But, I digress…

Now, a lot of the motion controller functionality has to do with how well the application or game has applied it but, for a developer worth their salt, these motion controllers are awesome and are truly a revolution in gaming. 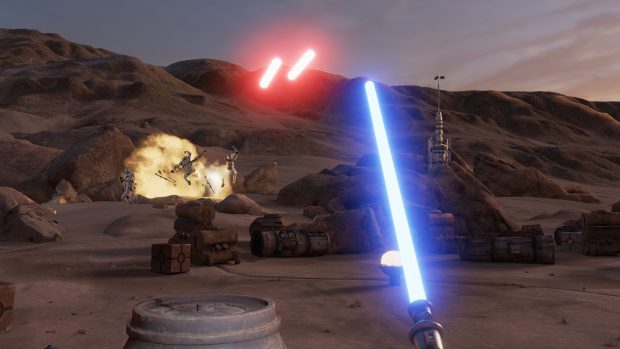 One thing that should be noted is that the HTC Vive does not come with an integrated headset for audio. However, it does have an audio jack on the Vive unit itself that you can plug your headphones into. The nice part of this is that you can choose whatever headphones you like. HTC does include some simple earbuds in the box that you can use if you like, but they blocked out a lot of the ambient noise and I personally like hearing what’s going on around me while I am in the VR space.

Due to the increased comfort padding around the HTC Vive, there appears to be a slightly narrower field of view when compared to the Oculus Rift. Despite this, I actually found the visual clarity of the HTC Vive to be better than that of the Rift’s. Adjusting the width of the lenses that the wearer looks through is done by a digital rotary knob. This adjustment system is very easy to use and extremely precise (with an onscreen indicator) – as opposed to the Rift’s slider control which, while functional, gives no on-screen indication of current position.

While my experience with the HTC Vive was amazing, there were a couple issues that are worth noting which you might encounter when you use it. The first was the occasional “jittering” of my point of view when I skirted around the outskirts of my play area. It was as though one of the sensors was losing sight of me, causing the issue. Gamers with larger play areas shouldn’t experience this as much.

The second issue to be aware of is one of cable management. The cables coming from the HTC Vive are thick and rugged, but you will undoubtedly end up stepping on them and having to scoot them out of the way with your feet while walking around your room. There are some third part cable rigs that you can buy, but I haven’t had the chance to check them out yet.

The HTC Vive is the only choice you should consider if you are in the market for a good virtual reality headset right now.  It has an extremely high immersion factor thanks to its room scale play and excellent motion controllers while also boasting great visual clarity. The HTC Vive retails for $799, which is very economical when compared to the Oculus Rift (which does NOT include motion controllers and only has one sensor). The HTC Vive gaming experience has to be seen to be believed, and I can’t wait for more AAA developers to start putting out games for it. Fallout 4 and Skyrim for HTC Vive can’t get here fast enough! We give the HTC Vive a 5 out of 5 and our “Seal of Excellence”.