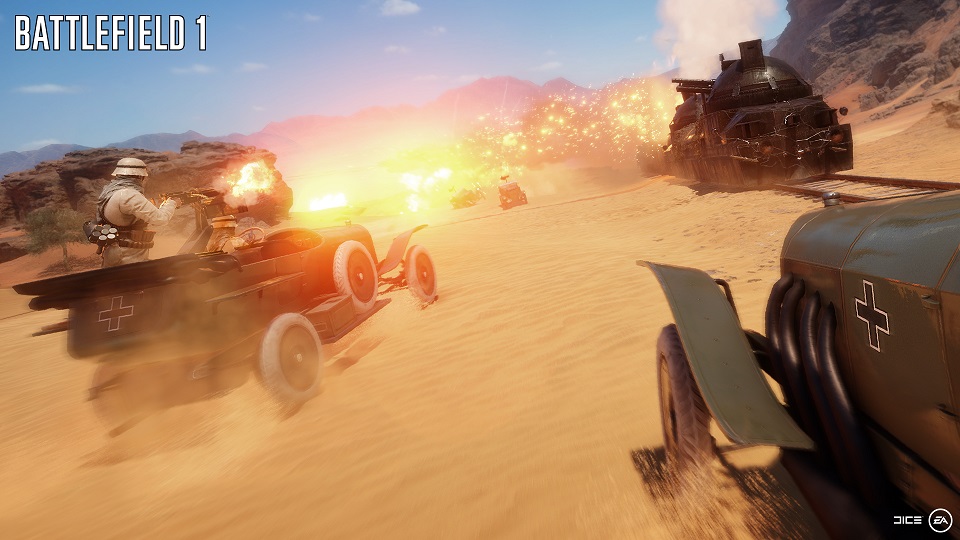 STOCKHOLM, Sweden – August 15, 2016 – Today DICE, an Electronic Arts Inc. (NASDAQ: EA) studio, announced the Battlefield™ 1 Open Beta* will begin August 31st on Xbox One, PC via Origin™ and PlayStation®4. Players who sign up as a Battlefield Insider and choose their platform before August 21st will be eligible to receive early access to the Open Beta. The Battlefield 1 Open Beta will feature two franchise favorite modes – Conquest and Rush – on the new Sinai Desert map. Playable with up to 64 players, this map includes a new controllable Armored Train behemoth, ridable horses and three new Elite Classes – Sentry, Flame Trooper and Tank Hunter.

Since the unveiling of Battlefield 1 in May, fans have been clamoring for a taste of the all-out-war experience that the backdrop of World War 1 provides. Bring a horse to a tank fight, or rain down machine gun fire on enemy positions with the heavily armored Sentry. Fans wanting to check out the Open Beta gameplay content before August 31st can do so by watching the Battlefield 1 Squads livestream on August 16th at 12pm PT at http://www.twitch.tv/battlefield or by coming to play the game this week at gamescom in Cologne, Germany. Battlefield 1 Squads will showcase two team captains, each leading a crew of 32 players, made up of the top Battlefield YouTube personalities, Twitch Streamers, and internet stars. Fans can also watch the new Battlefield 1 gamescom 2016 trailer at https://www.youtube.com/watch?v=ymwXbF1VTKU.

Witness the birth of all-out war when Battlefield 1 launches on October 21, 2016 worldwide on Xbox One, Origin for PC and PlayStation 4. Players who pre-order the Early Enlister Deluxe Edition can start playing on October 18**.

EA Access*** and Origin Access*** members can try Battlefield 1 before it’s released for a limited time as part of a Play First Trial starting October 13, on Xbox One and PC, respectively. EA Access members receive a 10 percent discount when they purchase a digital version of the game on Xbox Live, and Origin Access members get a 10 percent discount when they purchase the game through Origin.