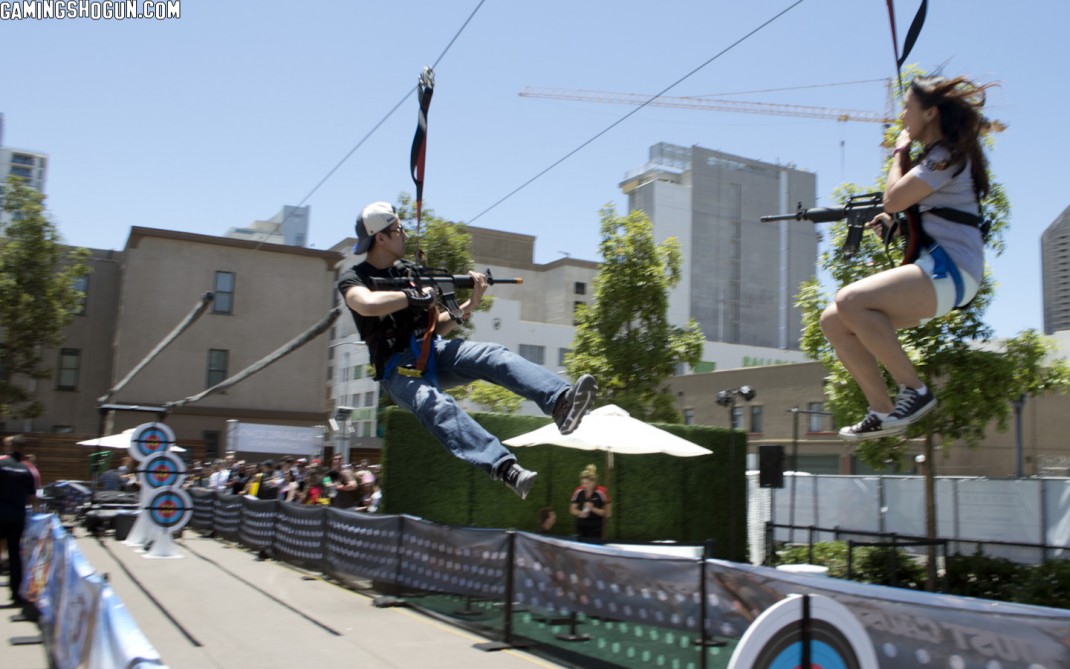 LOS ANGELES – July 14, 2016 – SQUARE ENIX® is once again giving fans the opportunity to participate in the Square Enix Experience, a themed outdoor area at San Diego Comic-Con 2016 celebrating some of the company’s leading franchises. The Square Enix Experience returns for 2016 with Deus Ex: Mankind Divided® – The Icarus Dash, FINAL FANTASY® XV – The Royal Race and aRise of the Tomb Raider® Glacier Climb.

Deus Ex: Mankind Divided will host the Icarus Dash; FINAL FANTASY XV will allow fans to speed around a go-kart track; and Rise of the Tomb Raider will challenge participants to conquer Lara Croft’s snow-covered wall climb. The Square Enix Arcade presented by Turtle Beach, featuring numerous Square Enix games and a beer garden await those who make it out from these challenges.

Enter the dark world of Deus Ex Mankind Divided and become covert agent Adam Jensen without the trench coat and fashionable shades. Showing off the Icarus Dash move, participants will have to run as fast as they can with a bungee cord on their back while shooting a laser gun at targets.
Fans can race each other in this themed, go-kart race that takes them through the various landscapes of FINAL FANTASY XV. Visitors can also have a photo taken to commemorate their race.
The Rise of the Tomb Raider Glacier Climb, inspired by the opening sequence of the game, will allow fans to test their skill and will against the hostile environments Lara faces. The 30-foot glacier wall covered in snow, offers an incredible opportunity for fans to experience Lara’s world. Climbers can have their photo taken while on the wall to capture their adventure. This obstacle challenge is the latest event in the Tomb Raider 20 Year Celebration (#TombRaider20), a year-long salute to the iconic heroine.

After an exhausting sprint with a bungee, a go-kart race and a treacherous wall climb, visitors can relax in the beer garden and enjoy music with an ice-cold beer. The beer will be offered after a donation to charity for those 21 years and older.

The Square Enix Experience will be located at 7th Avenue and Market Street in the heart of San Diego’s Gaslamp District, June 22-23 from noon until 10pm.

In addition to the Square Enix Experience, the company will host the following panels:

KINGSGLAIVE: FINAL FANTASY XV will be in select theaters nationwide August 19th and is currently available for Blu-ray™, DVD and Digital pre-order.