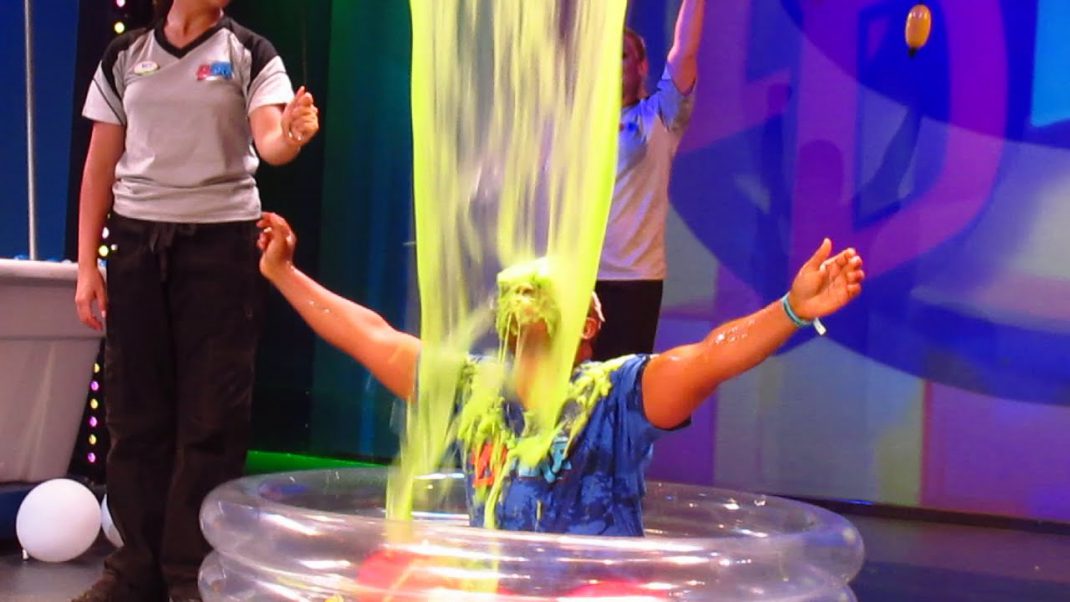 NEW YORK – July 6, 2016 – Nickelodeon’s The Splat–the network’s programming block dedicated to Nick’s legendary library of hits from the ‘90s and 2000s–will salute the 30th anniversary of Double Dare by bringing back original host Marc Summers for the first time in 16 years for a special live edition of the iconic game show on Friday, July 22, during Comic-Con International: San Diego 2016.

Streamed on Facebook Live from the The Splat’s Facebook page beginning at 9:30 p.m. (PT), fans can watch the red and blue teams test their trivia knowledge and compete in a host of physical challenges including the Wringer, Down the Hatch, the Human Hamster Wheel and the Double Dare Nose from the legendary obstacle course. The Splat will also feature behind-the-scenes photos and Q&As with Summers on its social media platforms including Twitter and Snapchat throughout the night.

The Splat will keep the celebration going on air with Double Dare Week, hosted by Summers, beginning Monday, July 25, on TeenNick at 10 p.m. (ET/PT). The programming lineup will feature brand-new Double Dare game interstitials, exclusive Snapchat photos from the live event, the most memorable moments from the game show and episodes from the original series, Family Double Dare, and Double Dare 2000.

At Comic-Con International: San Diego 2016, attendees will have the opportunity to meet Summers at a signing and take photos with the Double Dare Nose at Nickelodeon’s booth (#4113) on the convention floor. Nickelodeon and The Splat are blasting open the vaults for a slime-tastic, immersive experience at this year’s event, paying tribute to some of its most memorable shows and popular characters with activations, games, panels, talent signings and interactive design elements featuring: Legends of the Hidden Temple, Hey Arnold!, Rugrats, Aaahh!!! Real Monsters, CatDog, Rocko’s Modern Life, and Invader Zim, among many others.

Nickelodeon’s The Splat is a multiple-screen destination spanning television, eight social media platforms and a dedicated web site aggregating the most loved Nick content from the 1990s and beyond. Celebrating the characters and shows that are definitional to millennials who grew up in the ‘90s, The Splat consists of: an eight-hour television block airing daily from 10 p.m.–6 a.m. (ET/PT) featuring landmark Nickelodeon programs and classic programming stunts; a fan-driven website (www.TheSplat.com) built around social conversations; a robust social media community on Facebook, Instagram, Pinterest, Snapchat, Tumblr, Twitter, Vine and YouTube platforms; and a fully integrated Splat-branded emoji keyboard with emoticons, stickers and GIFs.

Nickelodeon, now in its 37th year, is the number-one entertainment brand for kids. It has built a diverse, global business by putting kids first in everything it does. The company includes television programming and production in the United States and around the world, plus consumer products, online, recreation, books and feature films. Nickelodeon’s U.S. television network is seen in more than 90 million households and has been the number-one-rated basic cable network for 20 consecutive years.