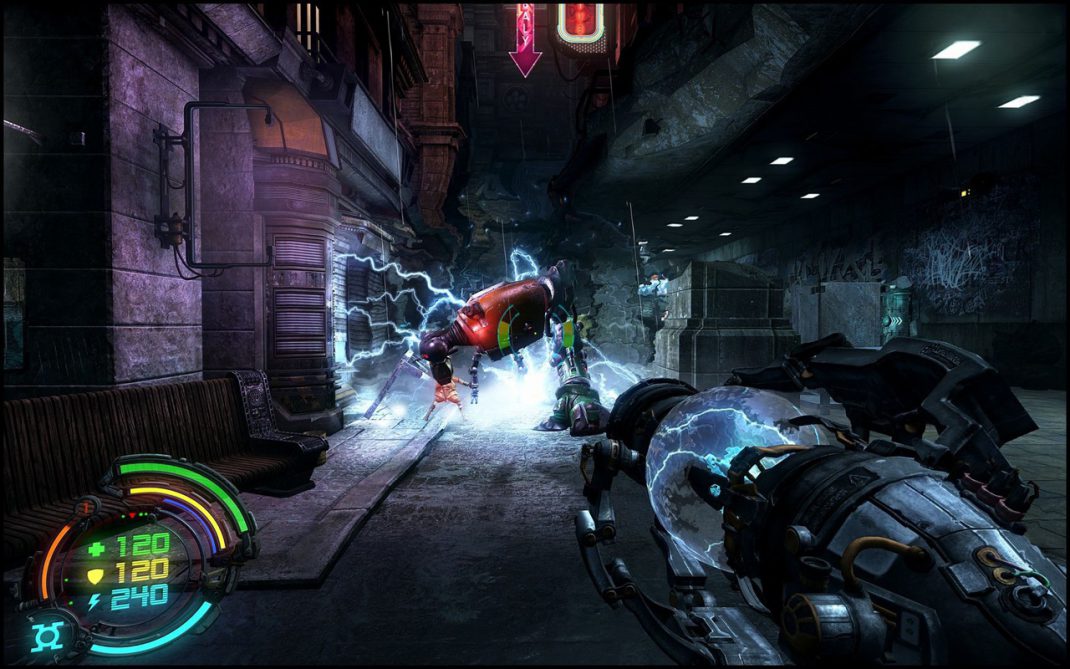 Ah the classic first person shooter of my youth, how I remember you fondly.  Your ability to carry 50 guns for no explainable reason, non-regenerating health which forced me to explore the level to find the hidden health packs, and  the complete lack of any cover to hide behind to slow down the action, made you so much more difficult at heart then the shooters of today.  Even your lack of story really made the action felt fast paced and frenetic, compared to the Call of Duty or Battlefield of today.  But every once in a while, a developer remembers those tough, old first person shooters of their youth and sets out to remake then using today’s technology.  That’s how we get games like Hard Reset by Flying Wild Hog.  Hard Reset was released in 2011 on the PC and immediately received praise for being similar to games like Serious Sam or Painkiller, enough so that Flying Wild Hog decided to remake it to today’s graphical standards with Hard Reset Redux.

Hard Reset Redux is the old style shooter from beginning to end, and that includes the game’s lack of commitment to fleshing out a solid narrative.  Cut scenes are fully voiced and presented in a graphic novel style, but really don’t give us any more glimpses into the overall story.  The story goes roughly like this, you play as a armed protector named Fletcher in the last city of Bezoar.  Bezoar is now constantly under attack from rogue robots that have gained autonomy through their advanced a.i.  The robots are trying to wipe out the last trace of humanity, and it is your job to prevent this by simply killing every mechanical being you see. 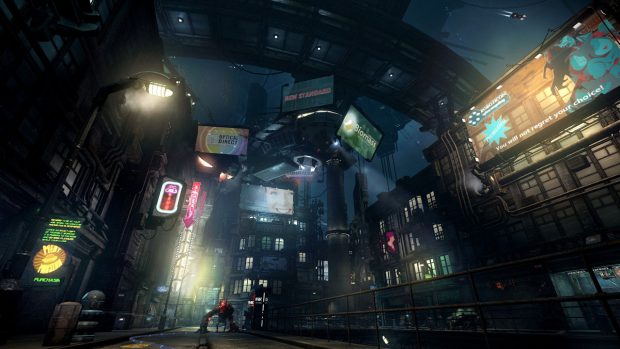 Compared to other shooters today, Hard Reset Redux  has a very lack luster story that is told horribly.  There isn’t a clear narrative here at all.  Now, whether that is due to the developers not having a writer to put the story in a clearer format, the story was lost in translation, or simply wanted to be closer to the old school shooters of my youth isn’t clear.  The end result is that the story does not matter in Hard Reset Redux at all and will not add nor take away from your enjoyment.  In the long run, that makes Hard Reset Redux feel much closer to games like Quake or Serious Sam then Call of Duty.

Hard Reset Redux goes back to the beginnings of the first person shooter genre for much of it’s game play mechanics.  To begin with, regenerating health is gone.  You much be able to find health packs in order to continue on in the game.  That means you will have to explore each level and find those secret areas in order to survive, and the enemy a.i. will make that a difficult task.  Hard Reset Redux focuses on fast paced action that is going to test your skills as a gamer.  This game is hard, but it isn’t unfair.  While the action will feel hectic, you will always feel like there is a glimmer of hope and that it is possible to get through a certain section alive.  I never played the first version of Hard Reset but from what I understand, Redux did re balance some of the game’s difficulty based on the negative comments of it being too hard.  Expect a challenge, but don’t expect it to feel impossible.

Hard Reset Redux does go against one of the old shooter conventions in terms of weaponry.  Characters used to act like pack mules and was able to carry 10 massive weapons at one time, but Hard Reset Redux will only give you two weapons; an energy weapon called the NRN and a projectile weapon called the CLN.  While Hard Reset Redux does limit the amount of weaponry you are given in the game, it allows you to modify these weapons in a great many different ways.  This includes boosting health, damage, ammo capacity or adding alternative fire modes to the weapons, like a shotgun or grenade launcher.

You pay for these upgraded at stations located around the city, using something called NANO as currency.  NANO is gathered from kills, or can be found just laying around the levels as you explore.  The secret areas will also contain huge stashes of NANO to help you purchase the modifications you are looking for.  NANO is plentiful enough to buy what you need to in order to progress in the game, and some of these upgrades feel absolutely necessary in later levels.  You also have a melee attack, that is a katana, but you will almost never use it.  It caused more hard to me then good. 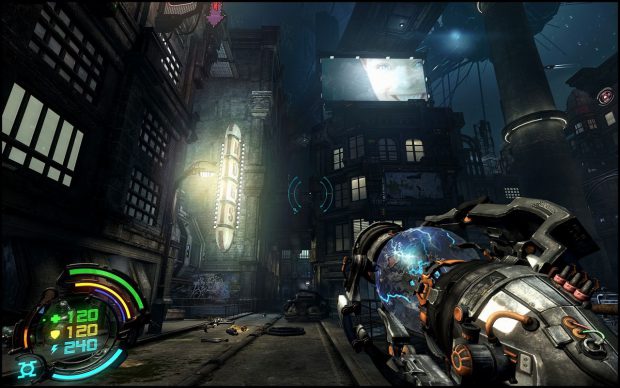 Hard Reset Redux looks like it was cut from the same cloth as Blade Runner in terms of visuals.  The levels look dark and gritty, but with enough bright neon to light your way.  The robots looks suitable threatening, and you will have no problem in seeing what is an enemy that means to turn you into a soft pile of goo, and what is a vending machine.  The graphics have been upgraded from the original game, and look quite pretty on the Xbox One.  In fact, it compares nicely to many of the AAA game releases that have hit the console in the last six months, without the hefty price tag.

Voice acting is par for the course in a game like this, not great but not the worst I’ve heard either.  Since the story is almost non-existent, the voice acting wasn’t a big deal for me at all.  Sound design was quite good.  The sound effects and music adds to the gaming experience and makes the game feel even more hectic then it may actually be at that time.  The guns have a satisfying sound when fired, the robots sound convincingly menacing, and the city sounds like it should.

Hard Reset Redux is the classic first person shooter in a beautifully updated shell.  The action is fast paced, the a.i. is a serious threat, and the level design is an almost perfect marriage of exploration and keeping the action going.  Hard Reset Redux does everything right, and for the fraction of the cost of a AAA game.  Flying Wild Hog addressed the negatives of the original version of the game by re balancing the difficulty and by adding in extra content to keep the game from being to short.  All of this for $19.99.  What Flying Wild Hog have done is put out a serious contender for part of the market that the new Doom was aiming for.  For a third of the cost of Doom, you will get the same old school shooter action, the same great fight sequences, and the same gorgeous visuals.  Plus, you can order a pizza, some beverages, and still have some left over.  Hard Reset Redux is available now for the Xbox One.