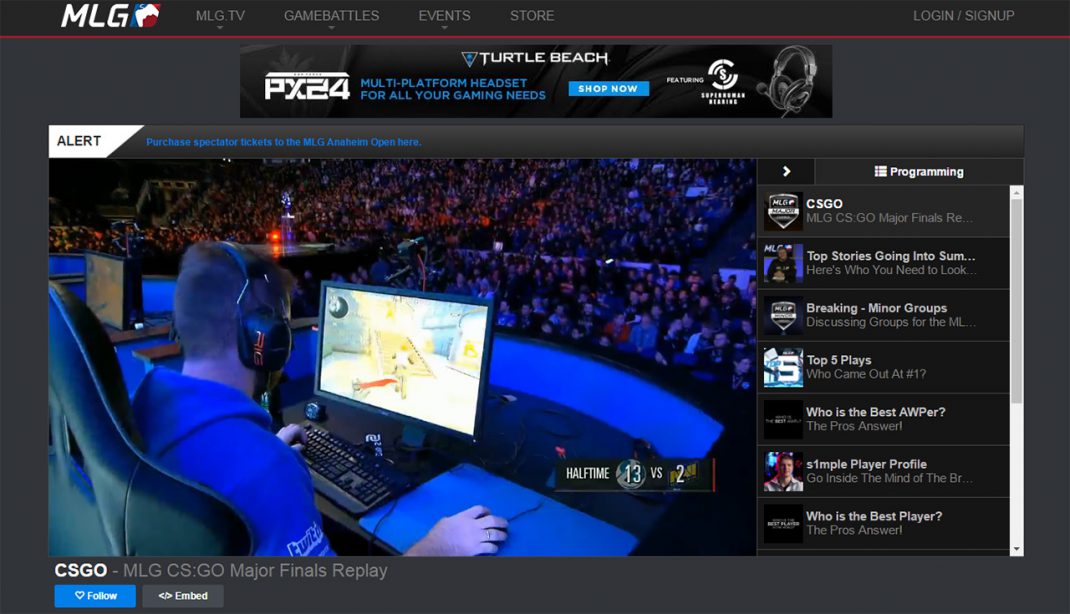 MLG.tv debuted its Enhanced Viewing Experience (EVE) at the event, a High-Definition video stream with a built-in algorithmic system that provides viewers with match statistics, up-to-the-minute leaderboards, and situational insights based on the competition they are watching.

“We’re building a network dedicated to the thrill of competition and the passion of the fans,” said Steve Bornstein, Chairman Activision Blizzard Media Networks, “MLG.tv will play a defining role in realizing the full potential of this audience by creating meaningful, memorable and shareable content.”

“Esports is a cultural phenomenon at its tipping point, and we’re excited to work with the IAB to bring this message directly to advertisers as part of the 2016 Digital Content NewFronts,” said Mike Sepso, SVP Activision Blizzard Media Networks “The size of our digital network, coupled with our insights into this audience’s viewing habits, put us in a unique position to educate the advertising industry on how to safely target these viewers and reach them on their platform of choice.”

ABMN will launch this content and more during the MLG Anaheim Open, a two-day Call of Duty®: Black Ops III tournament set to kick off on June 10, 2016. The MLG Anaheim Open will also be the inaugural event as part of a deeper collaboration with Facebook. The collaboration will allow MLG.tv to broadcast live competitions and deliver ESR content to the 1.6 billion people on Facebook.

“Esports is an exciting space and continues to be a growing priority for us,” said Dan Reed, Head of Global Sports Partnerships for Facebook. “With over 1.6 billion people on the platform and a growing suite of VOD and live streaming products that partners can use to increase engagement, Facebook is uniquely positioned to help esports fans connect around exciting moments and great esports content. We’re thrilled to be working with Activision Blizzard Media Networks, a leader in esports, to help fans enjoy and share a variety of exciting new formats and programming on our platform.”

ABMN’s NewFronts presentation opened with a video showcasing the division’s record-breaking live championship held last month at Nationwide Arena. Sepso and Puckett were joined by Josh Cella, ABMN’s Head of Sales, to present the new content and advertising opportunities to a packed house at the PlayStation Theater in Times Square.