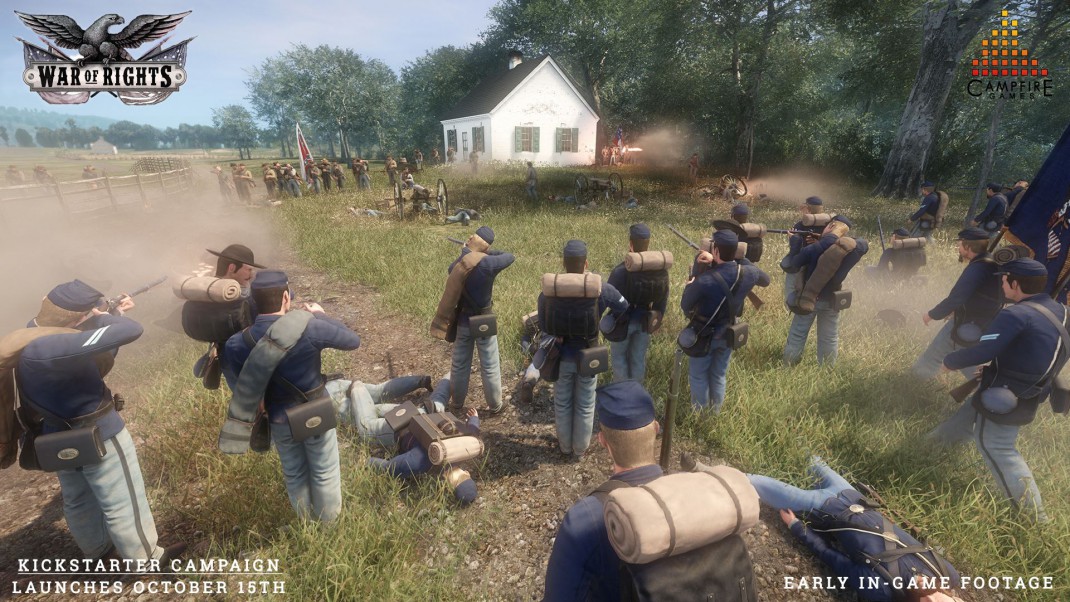 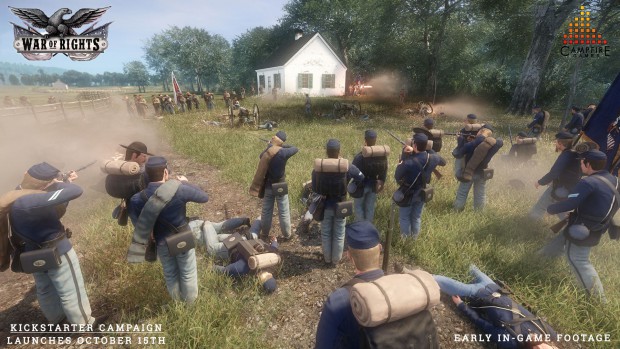 War of Rights is a multiplayer game set around the tumultuous period of the American Civil War, during the Maryland Campaign of September 1862. Campfire Games is devoted to presenting the gruesome and glorious elements of the period, while maintaining the highest level of historical accuracy and realism as possible thanks to the wonders of CRYENGINE. Having been in development for over three years, the team at Campfire Games is taking to Kickstarter to aim to secure the funds needed to complete the game.

Players will be able to take on the multiple battlefields of the campaign, from the confluence of the Potomac and Shenandoah Rivers, where the Siege of Harper’s Ferry took place, to the ridgelines of South Mountain, to the meandering waters of Antietam Creek at the Battle of Antietam. Additionally, players will also be able to choose from a list of regiments that fought in each battle, as well as what rank to fight as, whether they want to slog it out as a lowly private, or orchestrate the carnage and mayhem as a Major General.

“With War of Rights having now been in development for over three years, we felt it was the right time to finally get the game to Kickstarter to secure the required funds.” said Emil Alexander Hansen, co-founder and technical artist at Campfire Games. “War of Rights is something very special to us, we’re incredibly passionate for historical accuracy and so with a successful crowdfunding campaign, we’ll be able to dedicate the time and attention the game needs to be and with the power of CRYENGINE, it’ll allow us to deliver something that’s truly authentic.”

Each map contains a period reconstruction of the buildings, farms, forests, roads and rocks that existed so that players can fight through the streets of Harper’s Ferry, in the wooded heights of Fox’s Gap at South Mountain, or in the wheat fields and Bloody Lanes of Antietam with great accuracy. Players can feel the whiz of each deadly shot and shell fly by their bodies, or hitting their comrades, or themselves, as they scream in a bloody hail from their wounds.

Campfire Games brings the fighting of the Civil War right to the player’s computer screen!

About Campfire Games
Campfire Games is a Danish indie developer founded by Emil Alexander Hansen and Mads Støjko Larsen. They’re currently working on War of Rights, a game set during the American Civil War. The team consists of talented people from all over the world, including both newcomers as well as veterans of the industry. Amongst the current team members are people who have been involved in Verdun and Space Hulk, as well as on other American Civil War themed game projects.

About Crytek
Crytek is an independent videogame developer, publisher and technology provider with headquarters in Frankfurt am Main (Germany) and seven other studios around the world. Established in 1999, Crytek has created multiple award-winning titles, including the original Far Cry, the Crysis series, Ryse: Son of Rome and Warface. All of Crytek’s games are developed using CRYENGINE, the company’s cutting-edge 3D game technology, which is also the first choice of other leading developers and licensees when creating games for PC, Xbox One, PlayStation®4, Wii UTM, iOS and Android. Crytek’s ongoing growth in the games-as-a-service market has extended the company’s reach as they continue to deliver top quality interactive experiences to players through self-publishing platforms