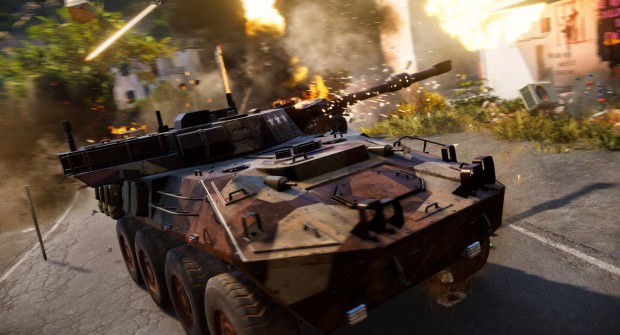 October 8, 2015 – Coinciding with this year’s New York Comic Con, we’re pleased to release the new gameplay trailer On a Mission. The trailer highlights how JUST CAUSE 3’s sandbox gameplay flows into missions, as Rico makes use of his vast arsenal of weapons and abilities to defeat General Di Ravello’ forces.

In this mission, Rico must protect the town of Costa Del Porto from the General’s tanks before breaking his friend Mario out of prison and escorting him to safety. Di Ravello believes the odds are stacked in his favour, but with Rico the General may have bitten off more than he can chew.

Watch the JUST CAUSE 3 ON A MISSION trailer here

Get ready to ‘Set the World on Fire’ on PlayStation 4, Xbox One and high-end Windows PC on December 1st 2015.