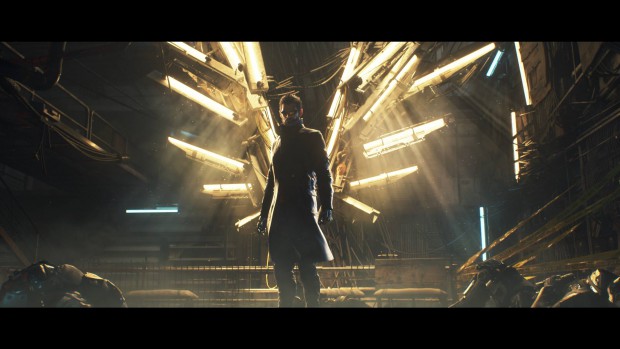 Square Enix also revealed “Augment Your Pre-Order” – the channel wide pre-order campaign for Deus Ex: Mankind Divided, in which increasing tiers of pre-order bonuses will be unlocked as more copies of the game are reserved, worldwide in select countries. The campaign will give fans an opportunity to collectively expand and enhance their own customized Day One Edition of the newest entry in the Deus Ex® franchise. In the spirit of emphasizing player choice, fans will be able to choose which pre-order bonuses they will receive from each unlocked tier. In addition the fans will have the opportunity to shift the official release date early by 4 days.

Augment Your Pre-Order Campaign Details are listed below. An overview can also be viewed on YouTube here:

TIER 1 – ONE ITEM PER PRE-ORDER (UNLOCKED FOR EVERYONE ON AUG. 31)
Choose between three Starter Packs that cater to stealth, aggressive or nostalgic players.

TIER 2 – ONE ITEM PER PRE-ORDER
Pick between one of two bonuses that further immerse players into the game world – a digital art book that shows the aesthetic of the game, or a digital OST sampler with six tracks from award winning composer Michael McCann.

TIER 3 – AVAILABLE FOR EVERYONE
Unlock the “Desperate Measures” pre-order mission in which Adam returns to the epicenter of the Ruzicka Train Station explosion and must rely on his augmentations and covert operative skills to unveil the true culprit responsible for the bombing.

TIER 4 – ONE ITEM PER PRE-ORDER
Get an in-depth look at the Deus Ex universe with a digital comic book that dives deeper into the game’s global conspiracies, or with a novella that follows iconic characters from Deus Ex: Human Revolution with new and unknown details on their lives.

TIER 5 – AVAILABLE FOR EVERYONE
For the first time in the franchise’s history, if players meet this tier, the game will release four days before the official release date.

Finally, for hardcore Deus Ex fans, a fan voted Collector’s Edition is also available for pre-order. In addition to containing all the in-game content & rewards from the ‘Augment Your Pre-Order’ campaign, it also comes with a 48-page ‘Titan’ Art Book, a 9″ Adam Jensen figurine, a limited edition steelbook and the Day 1 Edition of Deus Ex: Mankind Divided.