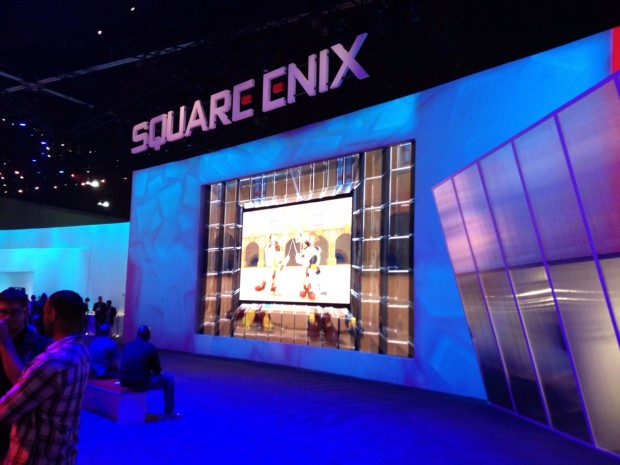 LOS ANGELES (August 20, 2015) – Square Enix® today announced its lineup for Penny Arcade Expo (PAX) Prime 2015, coming to Seattle Aug. 28 – 31, 2015. This year’s lineup features stand-out titles, including the first US playable demo for Just Cause® 3 – Avalanche Studios’ vast open-world action adventure experience, the soon to be released Lara Croft® GO – the latest puzzle experience from Square Enix Montréal, and the continuing episodic experience, Life is Strange™. Fans will be able to get hands-on with some of the publisher’s biggest titles, including FINAL FANTASY® XIV: Heavensward™, FINAL FANTASY XV –EPISODE DUSCAE™- 2.0, FINAL FANTASY EXPLORERS®and DRAGON QUEST HEROES®: The World Tree’s Woe and the Blight Below™. All games in the lineup will be playable at Booth #3646.

SQUARE ENIX will also host a number panels, giving fans the opportunity to interact and converse with the talented teams behind each game.

Cerberus Theatre from Noon to 1 p.m., August 28
Join moderator Greg Miller and key developers behind Hitman GO and Lara Croft GO as they take a deep dive in the process of crafting innovative mobile games from big AAA franchises. They will discuss the challenges of distilling the complex universes of well-known PC/console games and transforming them into unique experiences for completely different platforms. Panelists will include three members of the Square Enix Montreal team: Daniel Lutz, Game Director, Antoine Routon, Lead Engineer, and Thierry Doizon, studio Art Director.

Just Cause 3 – A BEAUTIFUL PLAYGROUND OF CREATIVE DESTRUCTION

Sphinx Theatre from 3 to 4 p.m., August 28
Join Avalanche Studios’ Fred Hooper (Lead VFX artist) and Niklas Norin (Lead AI Designer) alongside Havok’s Cormac O’Brien as they reveal how their technology and expertise combines to create the incredible destruction and chaos that lies at the heart of Just Cause 3. Hosted by Greg Miller, you’ll learn exactly how they created the beautiful 400 square mile sandbox packed with possibility, compelling enemies and the largest, most realistic explosions and destruction ever seen in a videogame.

Sphinx Theatre from 4:30 to 5:30 p.m., August 28
Greg Miller hosts Jean-Francois Dugas, Jonathan Jacques-Belletête and Elias Toufexis, respectively Executive Game Director, Executive Art Director and the actor for Adam Jensen on Deus Ex: Mankind Divided. They will provide insight on what it takes to fully realize a character such as Adam Jensen, an augmented covert agent, on the new generation of consoles and PC. While Elias will share his thoughts on doing mocap and recording dialogues, our developers will dive into his story and design, as well as their goals for the experience of playing as Adam Jensen in Deus Ex: Mankind Divided. You will also get the opportunity to ask them questions about the game and their careers in the video game industry.

HITMAN – THE ART OF ASSASSINATION

Hydra Theatre from 8:30 to 9:30 p.m., August 28
Twitch: www.twitch.tv/SquareEnixPresents
YouTube: http://www.youtube.com/SquareEnixPresents
Join HITMAN Art Director Jonathan Rowe and Lead Writer Michael Vogt for an hour long journey into the design philosophy behind the visual and narrative universe of the world of assassination. Hosted by Game Informer’s Mike Futter, the pair will delve into the process behind the creation of the trademark living, breathing world of HITMAN and give numerous insights and examples into the design process for visual and narrative storytelling in a world where the main character says very little. How does art direction and story design impact the player experience in a complex game like HITMAN? The panel will end with a playthrough demo of the ‘Showstopper’ mission from the upcoming HITMAN game as well as a moderated Q&A.

Grand Hyatt Seattle Hydra Room 4:30 p.m. – 5:30 p.m., Saturday, August 29
Twitch: www.twitch.tv/SquareEnixPresents
Fans will be in for a treat as FINAL FANTASY XV Director Hajime Tabata will be taking the stage in North America for the first time at PAX Prime as part of the ongoing Active Time Reports. In addition to sharing a few personal stories about the development of the game, he will be sharing some insights into the recently revealed trailer. Join us on Saturday as we discuss one of the most highly anticipated games from Square Enix.

There will be a launch party at the Hard Rock Café co-hosted by IGN on Friday, August 28 starting at 7 PM to celebrate the recent launch of Lara Croft GO. PAX Prime attendees can check out the game and chat with the Square Enix Montreal development team while visiting the Lara Croft GO fan art contest gallery, organized in collaboration with Child’s Play. While you’re there, why not grab a traditional Montreal poutine!

HITMAN: Put a Hit on Cancer

Square Enix, HITMAN, and GameChanger are partnering up to put a hit on cancer, and need PAX attendees to become Agent 47®. Come to the pop-up barbershop at the Square Enix booth where you can shave your head to resemble Agent 47’s iconic bald look. For each head shaved at the show, Square Enix will donate $47 to GameChanger Charity and their mission of supporting children battling cancer.

For those who want to participate but prefer the hair-keeping role of a handler, you can still put a hit on cancer and receive a free Steam code for Hitman Absolution® by simply making a donation of at least $1.00 to GameChanger Charity.

Visit www.47vsCancer.org to make your donation, receive your game code and join Agent 47 in support of children with cancer.

Additionally, limited quantities of the FINAL FANTASY XIV “Before the Fall” original soundtrack and the “From Astral to Umbral” arrangement album will be available for purchase at the booth.

FINAL FANTASY XIV: BEFORE THE FALL Original Soundtrack
Event SRP: $50 (Sales Tax included)
The “Before the Fall” soundtrack features music from FINAL FANTASY XIV Patch 2.2 through 2.5 and includes a bonus code for an exclusive in-game “The Primogs” minion, a set of five musical moogles.

FINAL FANTASY XIV: FROM ASTRAL TO UMBRAL
Event SRP: $40 (Sales Tax included)
Popular songs from FINAL FANTASY XIV have been transformed into splendid band and piano arrangements in this album. This is the first official arrangement album for the title.

The full lineup of titles from Square Enix include:

Platform: PC, PlayStation®4, Xbox One
Developer: Avalanche Studios
ESRB: RP
Available: 12/1/15
Summary: The Mediterranean republic of Medici is suffering under the brutal control of General Di Ravello, a dictator with an insatiable appetite for power. Enter Rico Rodriguez, a man on a mission to destroy the General’s hold on power by any means necessary. With over 400 square miles of complete freedom from sky to seabed and a huge arsenal of weaponry, gadgets and vehicles, prepare to unleash chaos in the most creative and explosive ways you can imagine.

Platform: Android, iOS
Developer: Square Enix Montreal
ESRB: TBD
Available: 8/27/15
Summary: Lara Croft GO expands the turn-based puzzle gameplay and takes you on an adventure set in a long-forgotten world. Explore the ruins of an ancient civilization, discover hidden secrets and face deadly challenges as you uncover the myth of the Queen of Venom. PAX Prime attendees will witness a never-before-seen take on the iconic franchise featuring challenging gameplay, gorgeous visuals and a mesmerizing soundtrack, all at your fingertips.

DRAGON QUEST HEROES: The World Tree’s Woe and the Blight Below

Platform: PlayStation®4 computer entertainment system
Developer: Omega Force from Koei Tecmo Games
ESRB: T for Teen
Available: October 13, 2015
DRAGON QUEST®, one of the most iconic RPG series from Japan, will be transformed into a full-scale action RPG in the West. Players must rise up against insurmountable odds, challenge swarms of enemies and conquer gigantic monsters. It is filled with characters and monsters designed by world-renowned artist Akira Toriyama. Also, Yuji Horii, director and creator of DRAGON QUEST®, and Koichi Sugiyama, the renowned composer closely tied to the series, are closely involved in bringing this title to life. Fans can stop by the “Slime Wall,” a physical wall on display at the booth, where fans can squash and defeat the horde of slimes. In addition, the demo area allows fan to take on and challenge the all-mighty monster, Gigantes.

Platform: Nintendo 3DS
Developer: Square Enix
ESRB: Rating Pending
Available: January 26, 2016
FINAL FANTASY EXPLORERS focuses on cooperative play with friends and utilizes a refined party system allowing Explorers to master over 20 new and familiar jobs—including Knight, Monk, Black Mage and White Mage—to defeat the realm’s mightiest monsters and even recruit them for battle. Players will have the ability to call upon the powers of eidolons like Ifrit and Bahamut, as well as transform into other legendary characters from the FINAL FANTASY series via the Trance feature.