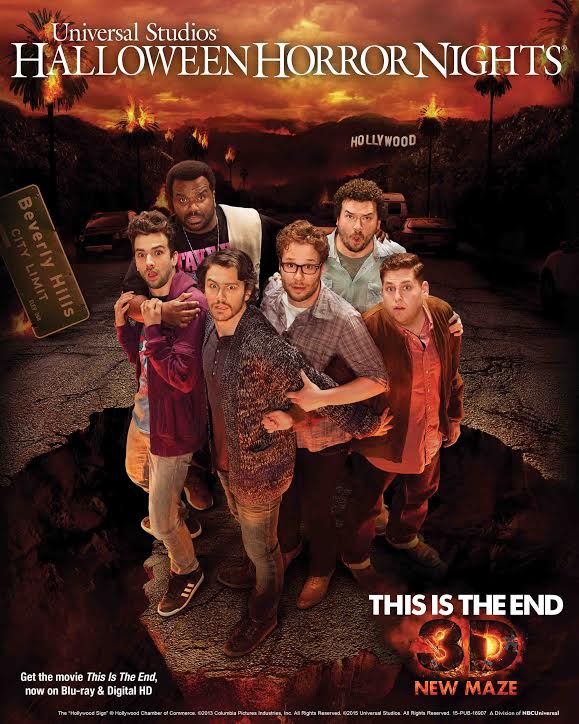 This is the End 3D Maze Announced for Horror Nights

The hilarity of this genre-defying blockbuster movie, This is the End, will take a dark turn in this all-new maze experience that will come to life in hypnotic 3D. The end of the world will begin as guests head to the ultimate A-list party at James Franco’s new Hollywood Hills home, before the Apocalypse strikes and they find themselves trapped in a life-and-death struggle against the demons of the underworld.  With the fate of humanity at the crossroads of heaven and hell, “This is the End 3D” will offer defining moments for those guests brave enough to tempt the devil as their destiny hangs in the balance to be damned for eternity or raptured to heaven engulfed in a sea of blue light.

“This is the End brings a new dimension of fear to ‘Halloween Horror Nights’ by fusing the best of two extreme worlds—horror and comedy— to create a literal and figurative three-dimensional experiential version of the film,” said John Murdy, Creative Director at Universal Studios Hollywood and Executive Producer of “Halloween Horror Nights.”  “Our collaboration with James Franco, Seth Rogen and Jonah Hill to transform this outrageous movie into a terrifying maze underscores the impact of ‘Halloween Horror Nights’ as one the most influential Halloween events around.”

To learn more about the all new “This is the End 3D” maze at “Halloween Horror Nights,” click here.