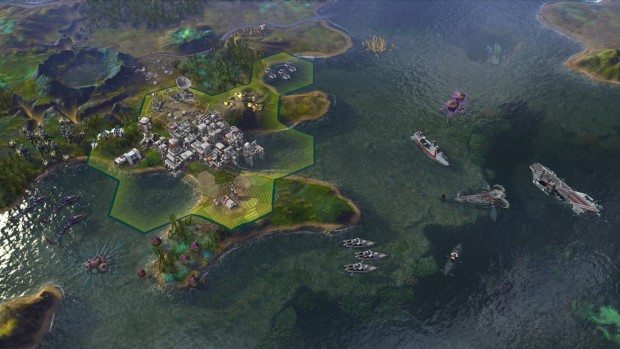 New York, NY – August 13, 2015 – 2K and Firaxis Games today announced pre-purchase details for Sid Meier’s Civilization®: Beyond Earth™ – Rising Tide, the expansion pack for 2014’s turn-based strategy title, Civilization: Beyond Earth. Players who pre-purchase the game will receive a 10% discount on their purchases. Rising Tide is currently in development for Windows PC, as well as Mac and Linux through Aspyr Media, and scheduled for worldwide release on all platforms on October 9, 2015.

New players who participate in the free-to-play weekend on Steam will have until 1:00 p.m. EDT on Monday, August 17, 2015 to purchase Civilization: Beyond Earth or the Civilization Beyond Earth: The Collection for more than 10% off, and retain their in-game progress.

Rising Tide will expand Beyond Earth to new frontiers on the planet’s surface and across its seas, adding more choices and diplomatic options as players build “one more turn” toward a new vision for humanity’s future. New aquatic gameplay will explore the oceans for colonization by dramatically extending the play space, while an overhauled diplomacy system will provide players with additional layers of dynamic choices and options to shape the diplomatic landscape while engaging with the AI and one another.