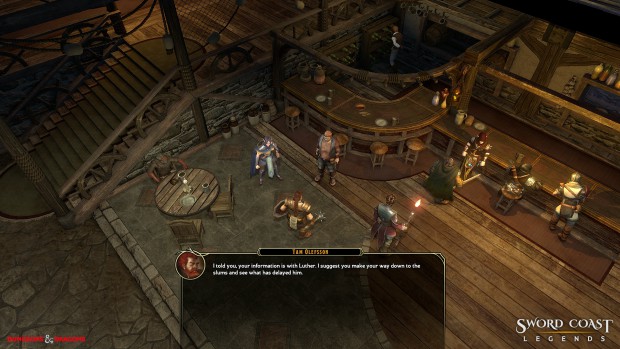 GAMESCOM — COLOGNE, GERMANY — August 5, 2015 — Independent developers, n-Space and Digital Extremes, announced that their upcoming Sword Coast Legends™, a party-based RPG set in the Dungeons & Dragons (D&D) Forgotten Realms universe from Wizards of the Coast, will now release on Steam for PC, Mac and Linux on September 29.  The PlayStation®4 and Xbox® One versions of Sword Coast Legends are still slated to appear in late 2015.

“We’re extremely excited to show everyone what we’ve been up to with Sword Coast Legends, but it looks like our dungeon bosses need a few more hit points … Larethar needs even more of a Scottish accent … and the game itself could use a touch ‘more cowbell,'” said Dan Tudge, President of n-Space and Director for Sword Coast Legends.  “All kidding aside, our fans deserve nothing less than whatever it takes on our part to deliver the compelling roleplaying dynamic of Dungeons & Dragons tabletop to the world of cooperative multiplayer video games.  If that means the game needs a few additional weeks of balancing, tuning and general polish — so be it.”

“While it’s hard to wait a few more weeks for Sword Coast Legends to drop, I’m happy the n-Space team is dedicated to crafting a quality D&D experience. All pre-orders getting the Rage of Demons DLC for free is exciting news,” said Nathan Stewart, Brand Director of Dungeons & Dragons at Wizards of the Coast. “And for D&D fans, the Rage of Demons DLC gives them another exciting way to face the demon lords in the Underdark.”

The studios also announced that all current and future Sword Coast Legends pre-orders will receive the very first DLC, “Rage of Demons,” free.  Sword Coast Legends is currently available for pre-order from Steam and the PlayStation Store for $34.99.  In addition to the free DLC, Digital Deluxe and Collector’s Editions, which include a tome of knowledge, cloth map of the Sword Coast, the official soundtrack, numerous in-game bonuses, starter items and DM abilities, as well as a statue of the powerful demon Belaphoss (Collector’s Edition) are also available for pre-order for $59.99 and $239.99, respectively, from www.swordcoast.com  Details regarding the upcoming “Rage of Demons” DLC expansion for Sword Coast Legends will be announced at a later date.