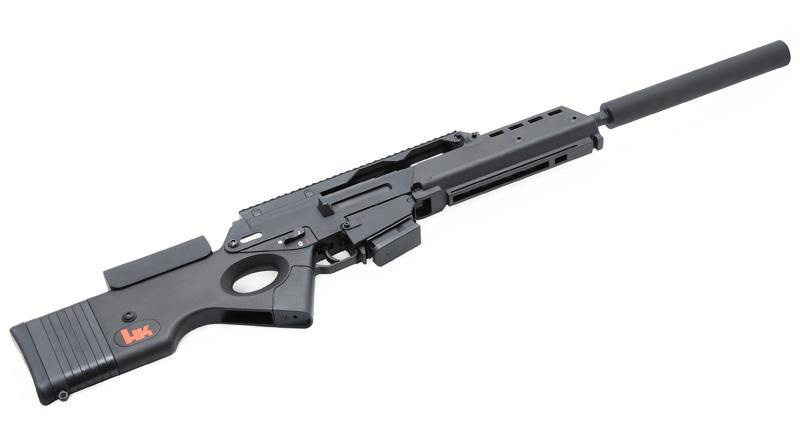 The Umarex / Elite Force H&K SL9 airsoft sniper rifle is certainly one of the most striking airsoft guns you will ever see on the field. Its black, futuristic design looks like something you would see in Appleseed or any other sci-fi action film you can envision. In reality, this airsoft gun’s bite is just as striking as its bark, with a rated 440 FPS velocity and 650mm inner barrel! The H&K SL9 features both semi-automatic as well as fully automatic fire modes, so you can use this rifle in more than just a sniper role.

The Umarex / Elite Force H&K SL9 can also be used as a support gun so long as you outfit it with a G-36 compatible drum magazine. Its metal version 3 gearbox is well-built and the rifle even features a blowback style action that adds a nice bit of feedback to your experience. Its gearbox is OEM’d by ARES and they have included their micro-switch trigger system which makes for a smooth trigger pull. The airsoft rifle comes with its mock suppressor permanently attached as well as a 35 round, short G-36 style magazine. This is in keeping with its purpose as a DMR or sniper airsoft rifle. You can use standard size Umarex / Elite Force G-36 magazines in the SL9 as well should you desire more ammo capacity.

Another great feature of the SL9 is a special button located inside the trigger area which releases any tension on the rifle’s spring. This will allow your rifle’s spring to have a much longer life than if it kept the tension on the spring. Also, the SL9 features ambidextrous controls so, whether you are right or left-handed, you will have no problems shooting it. The battery lives inside the SL9’s handguard and the handguard can be accessed like any other G-36 style airsoft rifle. The box also contains a decent bipod which will allow you to shoot much more easily from a prone position. 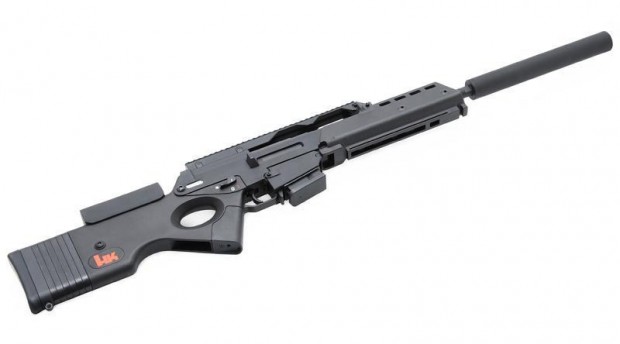 The Umarex / Elite Force H&K SL9 can be customized quite a bit to fit the shape and comfort of the shooter. For instance, its cheek rise has multiple segments which can be removed or added onto in order to give the shooter the kind of cheek weld desired. Also, the butt plate of the SL9 is segmented and the box includes several plates which can be added onto it. This will increase the overall length of the gun, but also can better fit those shooters with longer arms.

In terms of in-game performance, I found the SL9’s accuracy to be a little worse than I prefer at longer distances. Even with my scope as zeroed as I could get it (zeroing an airsoft rifle is troublesome at best), it just seemed to have difficulty getting consistent shots at targets from 150 to 200 feet away. That being said, I still absolutely love the way this airsoft rifle feels and looks, and I plan on doing some upgrades to it soon in order to make it more competitive.

Another thing I had trouble with was the Umarex / Elite Force H&K SL9’s fire selector. Unlike an M4 style airsoft gun, I could not use my shooting hand thumb to change the fire mode. The thumb hole grip just doesn’t allow that kind of dexterity. In order to change the fire mode on the SL9, I had to use the fire selector switch on the other side of the rifle. Just something to keep in mind prior to purchasing.

Overall, the Umarex / Elite Force H&K SL9 is a terrific looking airsoft rifle that performs fairly well as a DMR or support gun (as long as you put a drum magazine on it). This airsoft rifle retails for about $300 dollars and is available now from airsoft retailers everywhere. Its nylon fiber body is lightweight, yet very strong, and it provides a great base platform to add on to if you demand the utmost in your sniper or DMR airsoft rifle.