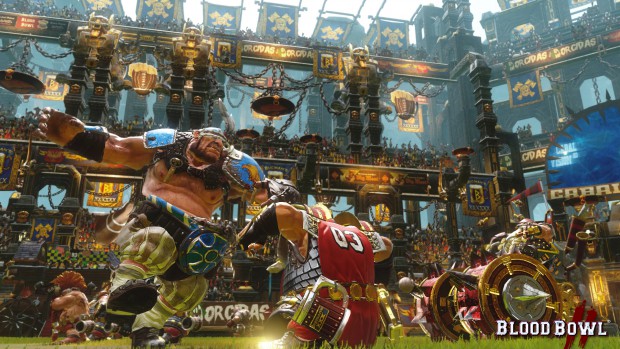 June 11, 2015 — After an introduction to the Chaos and Human teams in their gameplay videos, Blood Bowl 2, the sequel to the video game adaptation of Games Workshop’s famous board game that combines American football with the fantasy world of Warhammer, reveals its release date, two additional races, and a new video dedicated to its solo campaign!

We can now officially announce that Blood Bowl 2 will be releasing September 22 on PS4, Xbox One, and PC. The game was delayed by a few weeks compared with its initial release planned this June, in order to ensure that players would enjoy the most polished foundations possible for the next generation Blood Bowl experience. As a thank you for your support and patience, players will receive an extra Blood Bowl 2 race (including its own AI, design, skills, and their Star Players): the Lizardmen or the Wood Elves during pre-order campaign on consoles and PC. PC players who will pre-order the game on Steam will also be able to enjoy the multiplayer beta demo a few weeks before the release of the game.

More information is coming soon with regards to the pre-order bonuses and the different offers available, but until then, enjoy a video outlining Blood Bowl 2’s campaign game mode.

Blood Bowl 2’s campaign is a complete, story driven experience with various mechanics and twists-and-turns that won’t be found in any of the other game modes in Blood Bowl 2. The first few matches provide new-comers with all the basics of how to play, with a plot played out through cut-scenes designed with the game’s new engine to pave the way for Blood Bowl’s central narrative.

Here, you’ll be granted the opportunity to raise your team and enjoy all the central mechanics of single-player league play, tightly woven around the fabricated lore of this venerable franchise.

Blood Bowl 2 will be releasing September 22 on PS4, Xbox One, and PC.