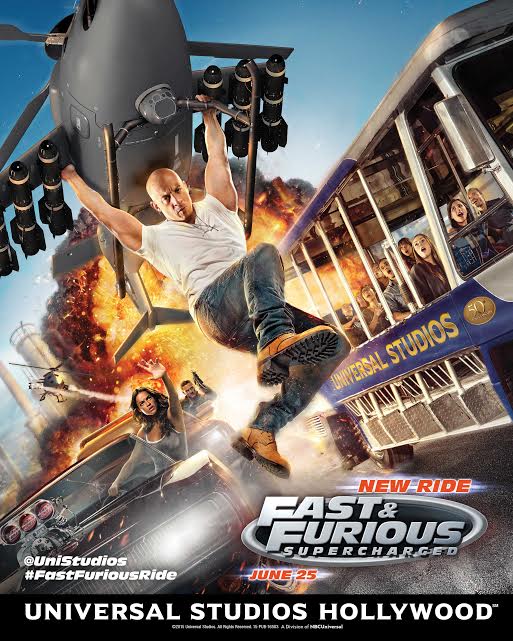 Universal City, California, April 28, 2015 – Universal Studios HollywoodSM shifts into high gear for the June 25 opening of “Fast & Furious—Supercharged” with the launch of “Road to Fast,” a dynamic campaign featuring a series of original images and an engrossing behind-the-scenes video, including interviews with the cast of its new thrill ride: Vin Diesel, Dwayne Johnson, Michelle Rodriguez, Tyrese Gibson and Luke Evans.

A collection of six images, each featuring the stars of the ride depicted in a variety of action sequences, will be unveiled sequentially beginning today with a group shot of the characters racing alongside a Studio Tour tram. A lengthier, more complex look at the making-of this revolutionary new attraction, featuring insightful perspective and commentary from the cast and producers, is also being released, and can be seen here.

“Fast & Furious—Supercharged” is a technologically advanced, epic ride that reunites stars from the Fast & Furious series in a groundbreaking mega-attraction designed to catapult guests into the high-stakes underground world of street racing at perceived speeds in excess of 120 miles per hour. This high-octane ride is conceived as a new installment to the Fast & Furious franchise and will debut as the grand finale to Universal Studios Hollywood’s behind-the-scenes Studio Tour that can only be experienced at The Entertainment Capital of L.A.

Sharing their enthusiasm for the ride, the cast of “Fast & Furious—Supercharged” had this to say:
“This is new territory for us…to create something as immortal and immersive as this…that all the fans of our franchise can actually live through and be a part of,” said Vin Diesel. “It’s a testament to that loyal and dedicated fan community that has always been our #1 champion.”

“Once you go on the ride, it’s an opportunity to physically feel some of the adrenaline that we feel everyday while we’re filming,” continued Vin Diesel, adding, “Yeah, I’m excited to ride it!”

“When you have something as unique and special as the Fast & Furious franchise, you want to create an experience for the fans that they can only feel and experience at Universal Parks,” said Dwayne Johnson, continuing, “To be immortalized in a ride, is a very cooI thing. I get a chance to become Luke Hobbs and kick ass…all in 3D.”

“You’re in Hollywood already…you’re able to get on the tram and experience your favorite movie and TV show sets; that’s a big deal. Everything about Universal Studios puts you in the driver’s seat to really experience Hollywood,” said Tyrese Gibson, adding, “Fast & Furious has the best fans in the world!”

“You’re completely immersed in the experience…you’re on a high-speed chase…it’s an amazing experience, and the guys that build these are true magicians,” said Luke Evans.

Coupled with an intense blend of visceral effects, “Fast & Furious—Supercharged” will take guests on a wild ride that begins the moment they board the Studio Tour. Exclusive interstitial content—that was filmed with the cast members—will be featured on the tram monitors, highlighting interactions as they engage guests en route to the ride’s climatic scenes. Along the tram route sightings of numerous prop cars from the Fast & Furious series, including Dom’s Dodge Charger, will enhance the story.

Universal Studios Hollywood, The Entertainment Capital of L.A.SM, includes a full-day, movie-based theme park and Studio Tour; the CityWalk entertainment, shopping and dining complex, the Universal CityWalk Cinemas and the “5 Towers” state-of-the-art outdoor concert venue. World-class rides and attractions include “Despicable Me Minion Mayhem” and “Super Silly Fun Land,” the critically-acclaimed mega-attraction, “Transformers™: The Ride-3D,” the intense, award-winning ride, “King Kong 360 3-D” on the behind-the-scenes Studio Tour, “Revenge of the MummySM—The Ride” and “Jurassic Park® —The Ride.” As part of its milestone 50th anniversary celebration in 2015, new attractions include the electrifying 3D-HD thrill ride, “Fast & Furious—Supercharged” as the grand finale to the famed Studio Tour, “Springfield,” hometown of America’s favorite TV family, adjacent to the award-winning “The Simpsons RideTM” and the “Nighttime Studio Tour,” offering tours of the iconic movie backlot on select evenings.