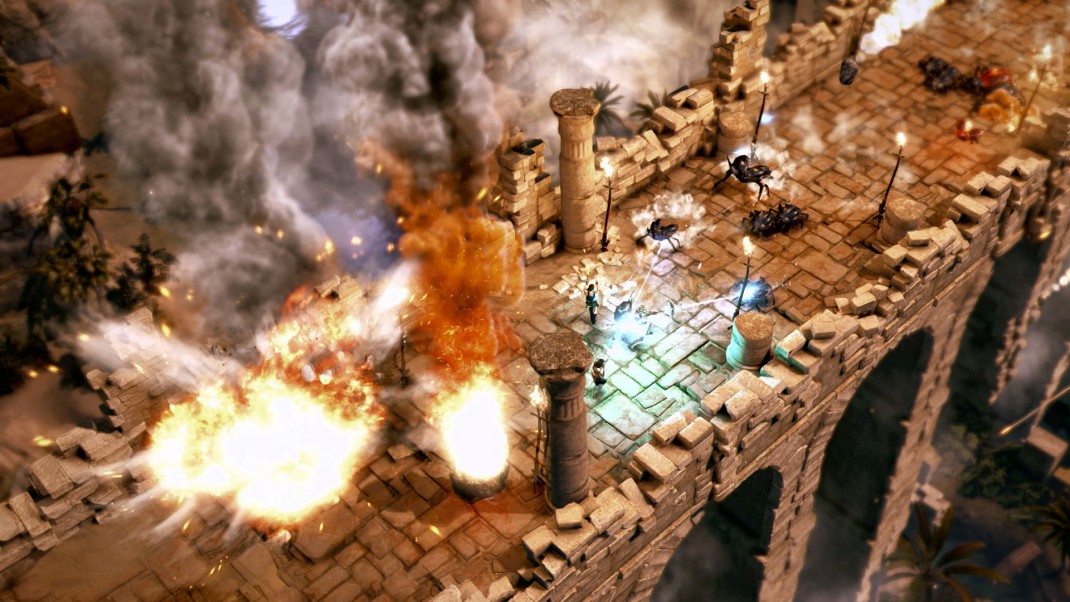 Lara Croft and the Temple of Osiris – A Review (PC)

Lara Croft and I have a very long relationship. As an ex-archaeologist and lover of anything Indiana Jones-like, the Lara Croft series has always held a place in my heart. Sure she is more tomb robber then archaeologist, but I’ve always understood the fine line between the two occupations, and how one can quickly turn into the other. I never did get to play the latest game of Croft’s, been way to busy with my other life, so when this review came up I was excited and ready.

The Temple of Osiris is set in Egypt and begins with Lara Croft racing through a tomb, against another robber named Carter Bell. Deep within this particular tomb, they discover the prison that is holding the Egyptian gods, Horus and Isis. Horus and Isis were imprisoned by the god Set, after Set had dismembered Isis’ husband and Horus’ father, Osiris. Set went on to rule Ancient Egypt until he was dethroned and sent to the Underworld, to rule over the dead. Horus and Isis quickly join up with Croft and Bell, as the four set out to collect the fragmented parts of a stature of Osiris. Once the statue is complete, Osiris will return to life to battle and defeat Set.

Ok, so the story isn’t going to win awards for drama and outstanding narrative, but it does a good job in bringing the old serials back to life again. The characters all have very specific goals to accomplish within the narrative, and are very one dimensional in that sense. You will not see a character grow or change during the course of the story, but it’s fine. Many games can excel despite the story being lackluster or the characters lacking any depth, as long as the game play works well, and it does in The Temple of Osiris.

The Temple of Osiris is, at it’s heart, a dual stick shooter with puzzle elements. The absolute best way to play this game on the PC is with a controller. You can play it with a mouse and a keyboard, like I did, but you will be fighting the control scheme the whole way. That’s not to say that the controls were pad, but they are definitely tailored for a controller over a mouse and keyboard.

The Temple of Osiris can be played solo or as a co-op game. Up to four players can play via online connection, and the puzzles will adjust accordingly to the number of players in game. If your are playing solo, the puzzles will be adjusted so only one player is needed to solve them. For instance, you will receive a staff that will allow you to lower and raise segments of the tomb by yourself without needing another player to help. While in a full 4 player co-op game, those same segments will require players to find levers or pressure pads to raise or lower them. It’s a very nice addition to the game, which makes it great to play either way. 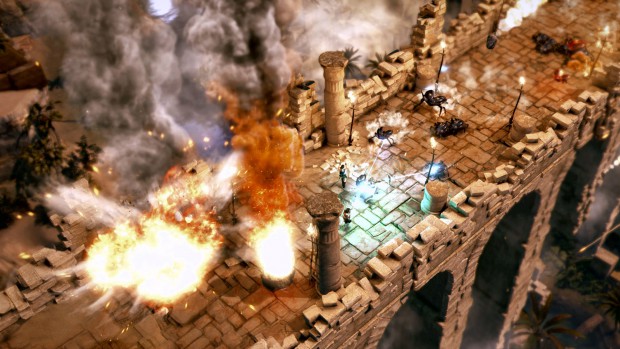 Combat is handled through a dual stick design, where one stick moves the character and the other stick aims the gun. You can find weapons and other items, such as rings or necklaces, that change your combat abilities as you explore the tombs. Weapons, other then your trusty handguns, have a limited amount of ammo and different characteristics, depending on the type of gun. Enemies drop ammo, so I never once came close to running out of it. Just start blasting everything in sight, you will be fine. The items that you can find are very interesting, since many come with a positive and negative effect for equipping it. You have to balance both the positive and negative to make sure you aren’t gimping yourself too much when you run into a boss battle.

The Temple of Osiris really excels in the game play category. This is where the game shines through for me, and is really fun to play. If you can ignore the story line, and the really horrendous voice acting (more on that in a moment), then you will be rewarded with great game play.

Visually, the Temple of Osiris does nothing really ground breaking, but doesn’t do anything bad either. Each tomb is interesting to view and is light very nicely. The tombs have some variance in them, but I wouldn’t expect much. After a while, the design will start to look all the same. The characters are design well too. Lara Croft is wearing her traditional outfit from the original series, but has had a reduction in the…er…um…chest region. This reduction goes more along the line with her current look in the next gen games, then her original look from the Playstation. For me, this look is the best of both worlds, traditional looking Lara Croft with a much more reserved look for the body type.

The voice acting is by far the worst thing about this game. It is awful to the point of being funny, then it turns out to be even worse. The dialogue is bad to begin with, whether that was a design decision or a funding one is unknown, but the actors’ delivery of every line just makes it worse. The actors are not into this at all, and it shows. This doesn’t bring the game into the unplayable realm, but it does keep the game from being a better product then it is.

Lara Croft and the Temple of Osiris is a solid action/puzzle game for the PC. With it’s isometric view and arcade-like action, the Temple of Osiris will feel right at home for those of you, like me, that grew up on this type of game. Combat is satisfying, if you use a controller and not a mouse and keyboard, and the puzzles are simple enough to get you to think without tearing out your hair. The way the puzzles adjust according to how many players are in the game is really a great feature, and should be used by more co-op puzzle games in the future. I feel that Crystal Dynamics really did a great job here, if you ignore the cheesy story line and horrid voice acting. Lara Croft and the Temple of Osiris is available now on Steam.