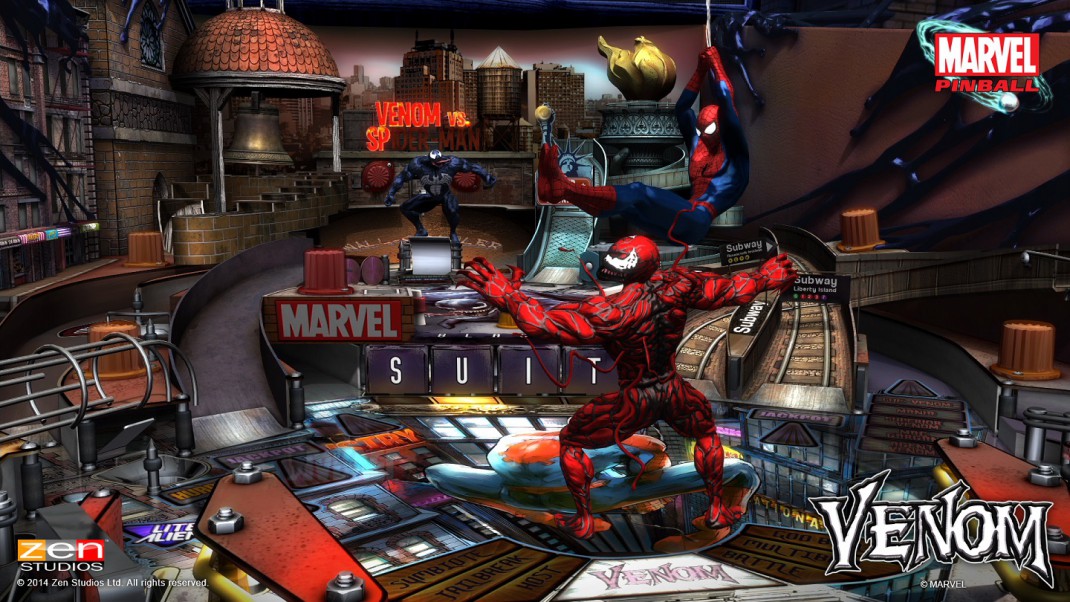 San Francisco, CA – November 24, 2014 – Zen Studios, the developer and publisher of hit digital games like Zen Pinball 2 and CastleStorm, has revealed its latest pinball table based on a Marvel Comics property, one that stars Spider-Man’s arch-nemesis, Venom. Venom pinball will be coming to Zen Studios pinball platforms on PlayStation 3, PlayStation 4, PlayStation Vita, Xbox 360, Xbox One, PC, Mac, iOS, Android, and Amazon the week of December 8.

As Eddie Brock’s journalism career spiraled downward, he always blamed Spider-Man for his own failure. A symbiotic organism from an alien world sensed his rage, and having itself been rejected by Spidey before, shared his hatred of the web-head. Thus, the Symbiote chose Brock as its next host, and together they are – Venom.

The Venom pinball table features Eddie Brock as the Symbiote-empowered villain as he faces not just his mortal enemy, Spider-Man, but also the threat of his twisted offspring, Carnage.  Can Venom and Spider-Man team up to defeat a greater threat?

The Venom pinball table will also allow players to experience Carnage’s origins in an exciting mini-game, relive Spidey’s own black suit exploits with the Symbiote during an electrifying multiball event, and teach Venom a lesson by exploiting the Symbiote’s weaknesses.