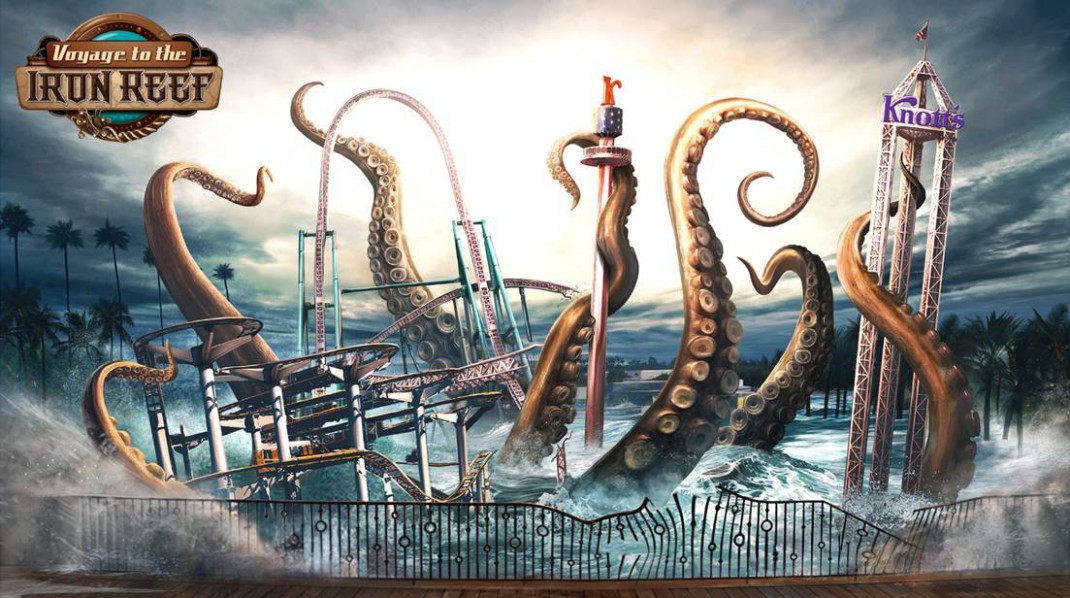 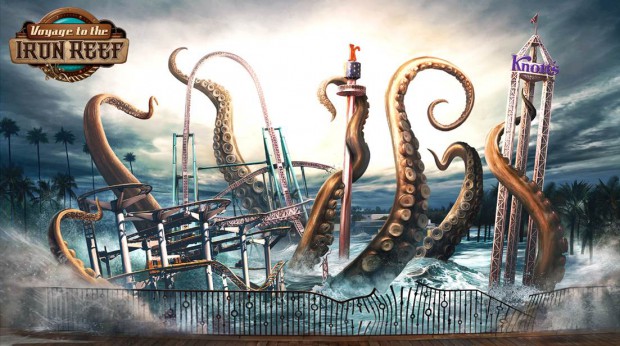 Buena Park, Calif. (November 13, 2014) – Knott’s Berry Farm announced plans for a spectacular new interactive 4-D attraction for 2015, Voyage to the Iron Reef.  Opening spring 2015, Voyage to the Iron Reef adds high-tech fun for everyone as guests save Knott’s from mysterious creatures emerging from the seas beneath the Boardwalk in a cutting edge media-based battle.

Ever since construction crews finished expanding the Boardwalk Pier in 2013, guests have happily enjoyed the many new attractions like Coast Rider and Surfside Gliders.  But all that activity on the Boardwalk shores has reawakened a mystic lair in the depths below, filled with creatures who have risen up to wreak havoc on the classic So Cal theme park.

The Queen of the Kraken and her aquatic army have surfaced to feed on the steel of any attraction within their grasps.  Their unquenchable appetite for coaster metal has turned these creatures into swimming mechanical monsters unlike anything ever seen on the ocean floor.

Guests who have what it takes to become brave deep sea navigators will climb aboard four-person submarine-inspired ride vehicles and embark on the four-minute gaming adventure into the Iron Reef.  Equipped with an interactive freeze ray, guests will aim for ballooning puffer fish, an iron clad octopus and other exciting 3-D creatures as they attempt to blast the most sea life and save Knott’s from a watery doom.

Altogether, it’s an interactive voyage that features a different experience every time and reacts to the actions and accuracy of the guests onboard.  Following the thrilling finale, the number of creatures taken is digitally displayed onboard and in the undock area.

Montreal-based Triotech, the multi-sensory attraction developer that animated the popular Wonder Mountain’s Guardian at Canada’s Wonderland, is the creator behind the groundbreaking gaming system and animation for Voyage to the Iron Reef.

“Triotech is thrilled to cooperate with Knott’s team and bring our media-based interactive dark ride to Southern California, an area with a rich attraction and entertainment heritage.  We feel that guests of all ages will enjoy this unique attraction,” said Ernest Yale, Triotech’s President and CEO.

Knott’s is well prepared to integrate new technologies into traditional dark ride experiences.  Next year will mark the third consecutive year the park has reintroduced spectacular and unique family attractions.  Both the Timber Mountain Log Ride and

The future home of Voyage to the Iron Reef is hallowed ground for Knott’s enthusiasts.  In 1975, the show building was originally the site of the wacky and whimsical Knott’s Bear-y Tales.  Designed by legendary theme park designer Rolly Crump, Knott’s Bear-y Tales transported guests to a county fair filled with anthropomorphized frogs, owls, and bears.  In 1987, dinosaurs once again ruled the earth as Knott’s Bear-y Tales transformed into Kingdom of the Dinosaurs, capturing the imagination of a new generation of fans.

“The same commitment to storytelling and dedication to incorporating the most cutting edge ride technologies that made Knott’s Bear-y Tales and Kingdom of the Dinosaurs so popular is what has driven the Iron Reef creative process,” said Raffi Kaprelyan, vice president and general manager of Knott’s Berry Farm.  “The technology showcased in Iron Reef will honor the legacy of the attractions that preceded it, and propel the on-ride experience into the 21stcentury.”

Voyage to the Iron Reef is the centerpiece of an exciting 2015 at Knott’s Berry Farm.  For project updates and park information, visit knotts.com or download the Knott’s Berry Farm app for your smart phone.  Join the conversation about the new attraction using the hashtag #KnottsIronReef on the Knott’s Facebook or Twitter page.

Since 1999, TRIOTECH has been creating the most technologically advanced immersive and interactive media-based attractions for both the entertainment and edutainment markets.  With installations in over 40 countries across all continents, TRIOTECH continues to push the limits of multi-sensory interactive attractions.  TRIOTECH also operates its own studio to develop state-of-the-art custom content for its attractions.