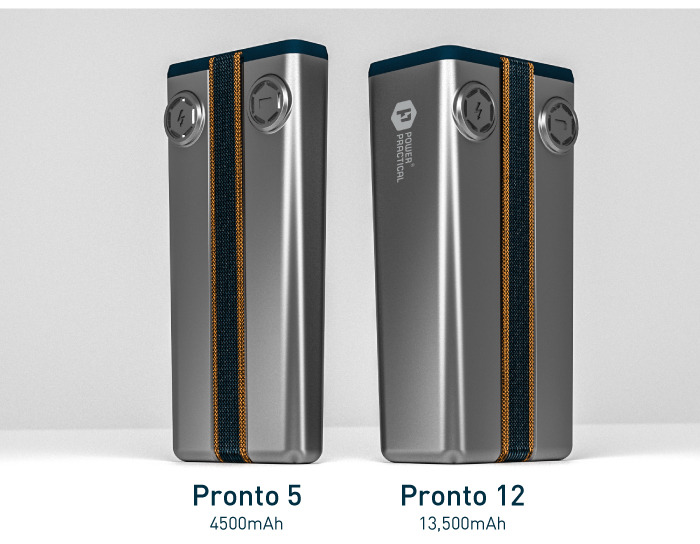 SALT LAKE CITY, UT — October 7, 2014 — Power Practical is launching a Kickstarter campaign for the fastest-charging portable battery pack in existence.  Called the Pronto– this battery pack is capable of storing a full smartphone charge in only five minutes. The company’s first Kickstarter campaign, the Power Pot, landed the team on “Shark Tank” where billionaire mogul Mark Cuban chose to invest in the company.

“Within seconds of meeting them on ‘Shark Tank,’ I recognized immediately how special the Power Practical team is,” said Mark Cuban. “The new Pronto is their latest innovation. There’s no battery pack like it on the market in terms of speed and power. Not one.”

Available in two models – The lightweight Pronto 5 (4,500 mAh capacity, enough for three full iPhone 5 charges) and the heavy-duty Pronto 12 (13,500 mAh, capable of nine iPhone 5 charges) both charge to full capacity in only 1 hour. Power Practical’s creation is designed with a virtually indestructible enclosure made of hard-anodized aluminum which is durable enough to withstand anything Mother Nature throws at it. Both models include a lightweight cap with an internal silicone seal to protect the ports from water and dirt.

The Pronto 12 features two high-powered USB ports, as well as a 12V adapter, allowing it to charge larger devices, such as laptops, DSLR cameras or even drone batteries.

Garnering instant notoriety following the appearance on ABC’s hit show Shark Tank, the Power Practical brand has grown immensely since its public debut. Upon its release, The Pronto becomes the immediate jewel of the Power Practical lineup, despite the rousing successes of previous launches, including the much-acclaimed PowerPot series.

Kickstarter is a key to Power Practical’s business model in bringing products to the market.  Following the successes of three previous campaigns on Kickstarter, Power Practical is again turning to the crowdfunding platform to bring its latest project to life.

The Pronto 5 is offered at the discounted price of $79 from Power Practical’s initial production run, with a special early bird pledge level of $59.  A $119 pledge lands a backer the Pronto 12, with an early bird special at $99.

Contributors will begin to receive their Pronto’s in early spring, well ahead of the Pronto’s wide-scale release.