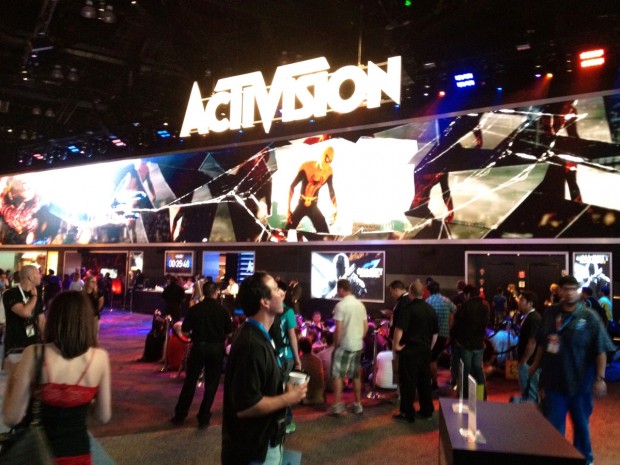 Cologne, Germany – August 13, 2014 – Activision Publishing, Inc., a wholly owned subsidiary of Activision Blizzard, Inc. (NASDAQ: ATVI), will showcase a blockbuster line-up of some of the world’s most anticipated next-generation gaming releases at Gamescom 2014.

Kicking off on Wednesday 13th August at the Koelnmesse GmbH Exhibition Centre in Cologne, Germany, Activision will be offering consumers and industry influencers the opportunity to get hands-on with some of the biggest titles of the year.   Call of Duty®: Advanced Warfare will be playable in the Microsoft booth located in Hall 5.2,Destiny will be playable in the SONY Computer Entertainment Deutschland booth, located in Hall 7.1 and Skylanders Trap Team™ will debut a new line of small-but-mighty characters in the Family Area, Hall 10.2.

“This September, October and November, we’re releasing three of the most talked about games in the industry, and perhaps our best slate ever. Destiny is the most pre-ordered new IP in history. Skylanders Trap Team is yet another breakthrough innovation for the biggest kids’ video game in the world*. And Call of Duty: Advanced Warfare is a creative leap forward for the biggest franchise in the industry,” said Eric Hirshberg, CEO of Activision Publishing. “With all of the hours of great games to be played, we apologize to spouses, bosses and significant others of every stripe in advance.”

Published by Activision and developed by Sledgehammer Games, Call of Duty® multiplayer enters a new era for the popular award-winning franchise.  Gamescom 2014 will see the global reveal of Call of Duty: Advanced Warfare multiplayer with fans getting the very first hands on anywhere in the world.

Call of Duty: Advanced Warfare is primed to deliver a thrilling blockbuster experience, packed with cutting-edge technology such as the exoskeleton, which changes the way gamers will play the game, and a brand-new weapon class, load-out system, endless customization and more, creating an in-depth, robust and advancedCall of Duty multiplayer experience.

From Bungie, the creators of Halo®, and Activision, comes Destiny, the next evolution in interactive entertainment that brings first-person action gamers together in a shared, persistent online world filled with epic adventures. Gamescom 2014 will showcaseDestiny’s competitive multiplayer, The Crucible, with announcements of the modes, maps and playlists that will be available at launch. Multiplayer playlists will mix up the gameplay with special rotating events, such as the Iron Banner, which allows players to enter battle against one another with no combat level restrictions.  Destiny will also feature an exclusive map called Exodus Blue for PlayStation 4 and PlayStation 3 owners, which will remain exclusive until at least Fall of 2015.

Fans visiting the SONY Computer Entertainment Deutschland booth in Hall 7.1 will be able to compete head-to-head in the intense action of competitive multiplayer in The Crucible and on Saturday and Sunday top scorers in each gameplay session will be awarded a limited edition Destiny T-Shirt. The booth will also feature a custom-built ‘Sparrow’ statue, offering visitors a chance to create and upload their very own Destinyphoto moment.

With four weeks to go before Destiny’s launch, global retailer GameStop Senior Vice President of Merchandising, Bob Puzon, said “With the launch of Activision’s Destinyjust around the corner, our GameStop associates are working diligently to prepare for what is currently our highest pre-ordered new IP in history.  Based on the consumer excitement we are encountering in our stores every day, Destiny is on track to deliver a tremendous gaming experience.”

Destiny will be available on September 9 for the PlayStation 4 system, PlayStation 3 system, Xbox One and Xbox 360. For more information, visit www.DestinyTheGame.com. For exclusive updates, follow the official Destinysocial channels at www.facebook.com/DestinyTheGame and @DestinyTheGame on Twitter, and interact directly with the developers at www.Bungie.net.

Developed by Toys for Bob, creators of the Toys-to-Life™ phenomenon, SkylandersTrap Team reverses the magic of its signature play pattern — letting kids take villains out of the digital world and transport them into the physical world, where they are captured in magical Traps — bringing both Toys-to-Life and life to toys. Fans can then play as both heroes and villains who join the forces of good in an all-new adventure.

Fans attending Gamescom will get a special Skylanders® treat — the first hands-on opportunity to play Skylanders Trap Team with a new line of cute, pocket-sizedSkylanders characters, called Skylanders Minis. Sixteen of the smallest but surprisingly powerful Skylanders are now joining the fight against Skylands’ most nefarious villains.  Diminutive in stature but mighty in battle, Skylanders Minis will deliver a fullSkylanders wallop as completely playable characters with upgrades and abilities, just like any other Skylanders, including the ability to trap villains.

At Gamescom, visitors in the Gamescom Family Area ((Hall 10.2) — who are “mini” enough to enter the smallest booth Activision has ever built — will be able to play with the new Minis.  Only those that meet the Skylanders Mini booth’s required height restrictions will get the chance to be the first in the world to play with five of the new Minis: Spry, Mini Jini, Drobit, Trigger Snappy and Hijinx. Visitors to the Family area will also have the chance to visit the Skylanders photo booth, where fans can be photographed as if they’ve been ‘trapped’ in Traptanium, just like the infamous villains in the game.

Ahead of Gamescom, Activision also announced that it is bringing the completeSkylanders Trap Team videogame to tablets at launch, marking the first time a fullSkylanders game will be available on iOS, Android and Kindle Fire tablet devices[1] day-and-date with the console version. The tablet version of the game delivers the same experience, with console-quality graphics[i] and high performance game controls as its console counterpart, delivering yet another significant technological leap to theSkylanders franchise. It is playable with touch controls or a Bluetooth® enabled controller that comes with the tablet Starter Pack.

Skylanders Trap Team will be available on October 10 in Europe, October 5 in North America and October 2 in Australia/New Zealand on the following platforms: a variety of iOS, Android and Kindle Fire tablets; Xbox One and Xbox 360 games and entertainment systems from Microsoft; PlayStation 4 system; PlayStation 3 system; Nintendo’s Wii™ system and Nintendo’s Wii U™ system. A different, unique adventure also will be available on the Nintendo 3DS™ hand-held system.