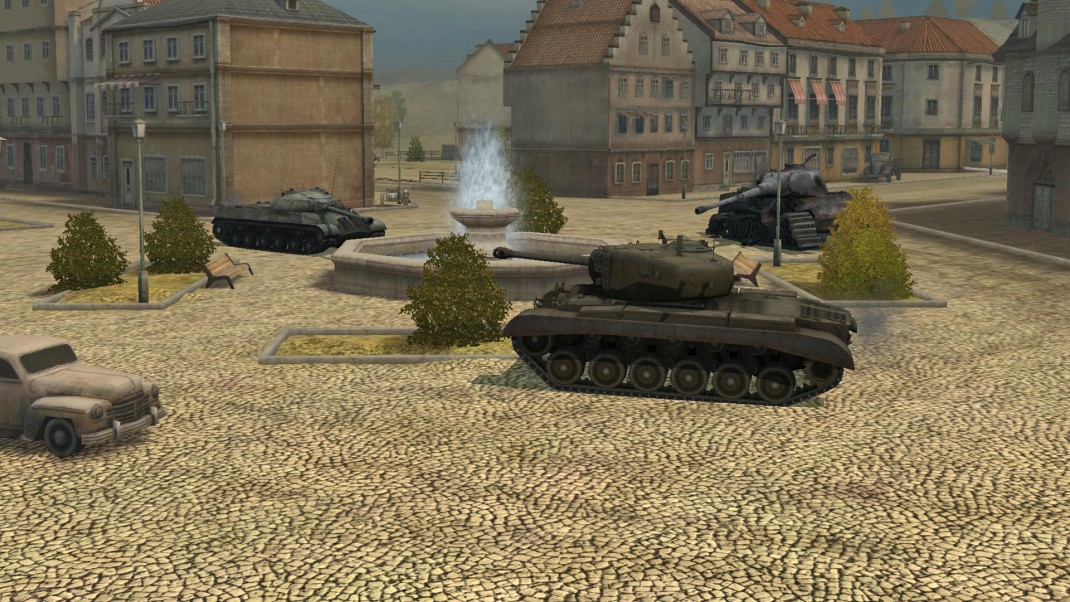 We here at Gamingshogun.com understand that, economically-speaking, times can be tough. So, when there is a game that can be played for free – that is, truly free and not free-to-play, pay-to-win, we make sure to let our readers know. A great case in point is World of Tanks, which completely free for the PC and an absolute blast to play. You can pay a bit to enhance you experience or speed up your leveling but in the end the better player wins the match not the most expensive tank. They then translated this same idea to World of Tanks Xbox 360 Edition with the same success. Fans of these games have been chomping at the bit to get their hands on World of Warships, the next title in the saga – but first comes a pleasant surprise, World of Tanks Blitz for the iOS platform.

The graphics haven’t suffered at all in the translation to the small screen, they are crisp and clear and extremely detailed which is important as players have come to expect historical vehicle accuracy from the series. Also, the tech trees are enormous which was surprising to me as tech trees are generally scaled back much more in mobile games. There are only three nations to start with but their are so many vehicles and upgrades that you probably won’t come even near to completing them all before another nation is added.

My next expectation was very small matches, I guessed probably just 4 vs. 4 so the systems could handle them. I was very pleasantly surprised to find myself in 7 vs. 7 matches so that the excitement of multiple players hunting and strategy was still maintained. 14 players do a nice job filling up a map. which is another great point about this platform, it has all kinds of maps, many being familiar, scaled down versions of the PC and 360 maps with some of the maps even feeling brand new. Part of this might be due to different priorities in a maps detail making it look different (sand gets less detail than a building or a stack of wood) and yet if you have a strategy on the rebuilt maps it might just still work to your advantage.

If you have spare funds to spend the premium account is worth it’s money in speeding up leveling and in game currency and there are vehicles and special ammo you can buy to give you a slight edge or at least a faster level to a new class.  Hardcore players though tend to believe in earning your bones in this game so you will find both bought and earned tanks on a pretty even playing field.

The only real problem with the game is the inherent problem of the platform itself: Its controls. You have to use your right thumb to move the tank, your left thumb to move your view then whatever finger you want to hit the zoom and fire buttons. The controls are greatly simplified and adapted to touch screen technology but in the end you still find your left thumb slipping off the tank controls or bumping the wrong one. In some cases you might even find your thumb sliding up and prematurely hitting the fire button giving away your position. There are thumb attachment sticks that can be purchased and stuck to the screen but I have never found them to be particularly consistent and if you get used to one and it pops off mid match you might find yourself in a world of trouble.

Final Thoughts:
World of Tanks Blitz gives you the opportunity to play a great title on the go with most of the console or PC features intact. This is a great accomplishment that Wargaming.net should be proud of and sets a new standard for shooting games, particularly vehicle-based ones, on the iOS platform. I look forward to seeing what they add on or come up with next.