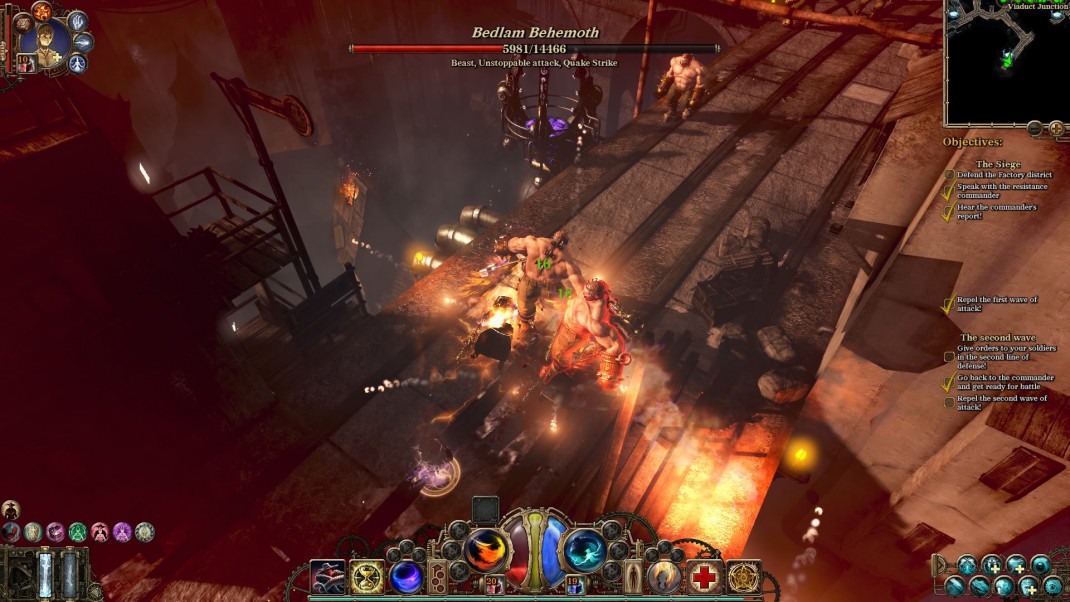 I was a big fan of the first Incredible Adventures Of Van Helsing. It had a Diablo feel to it but with enough of its own take on the random dungeon crawler to feel like a fresh play. There were a couple titles that came out around the same time but Van Helsing was definitely a standout with its fun interactions with Katarina, loads of Easter eggs and enough pop references to keep you smiling if not chuckling all through the game. It took gameplay serious but let the script be campy – which might not be for everyone but definitely hit home with me. So the question begs… does the second hold up to the standards set by the first?

Description:
Put on your wide-brimmed hat, grab your weapons and embark on an incredible adventure in the gothic-noir world of Borgovia, where mad science threatens the fragile peace between monster and mortal. Be Van Helsing, monster-hunter extraordinaire and save the day with your charming and beautiful companion, Lady Katarina (who happens to be a ghost, by the way). Explore the savage wilderness in the mountains and the soot-stained brick districts of a grim metropolis twisted by weird science, and don’t forget: you might never know who the real monsters are!

Hands On:
First off it is important to note this is a closed beta and a fairly early build at that. If you pre-order the game you get instant access to this beta but it is only about an hour long right now and most of the loot isn’t named yet. You will pick up an axe that has no image and is named “vh2axe” as a working title. There is a very good chance the stats on all the items will get completely reworked as well so don’t put so much stock in looting up, try to take in the experience.

At time of press, normal difficulty levels aren’t available (1-30) only veteran (31-60) but after character creation you will be geared up with a nice class appropriate set of rare gear that outshines most of what drops so you will be able to jump right into the ass kicking. There are six classes to start with with the ability to import a character from the first game (if you leveled it high enough and finished the game) but for the beta you are probably better off just going with a new character since it will be finely geared. There will also be a chance to create a custom class somewhere down the road. Currently the classes are Blade (primarily melee and recommended for newcomers), gunslinger (ranged combat with sniping), spellkeeper (elemental caster), adeptus (power caster and crowd control), bombardier (steampunk AoE damage), and contraptionist (steampunk necromancer). The classes and their armor really reinforce the gothic steampunk feel of the game, particularly the contraptionist who makes mechanized spiders (not skinned yet) and turrets.

Just like in the first game Katatrina can be set and armored up to compliment your class so make sure if you are range dependent you set her to melee or visa-versa. Like amazons in Diablo she has many but not all gear slots so think of her needs as well as your own when gearing and make sure she has plenty of potions. Particularly nice things about Katarina are you won’t be trading her in and if you decide you need her to perform a different role whether it be melee/range or defensive, assist, etc in battle you can set all that at any time. She even has her own inventory and you can order what she picks up off the field such as gold, commons, or magoc items and when her inventory is full or you need money you can send her shopkeeping and she will go sell it all to the vendor. It takes the tedium of running back to the shopkeeper in the middle of a dungeon simply because your bags filled up. You can even expect a playfully, snarky comment as she does it.

The beasties are brand new even in the closed beta, where you get to see magical monsters fighting side by side with steampunk nightmares. There is a pretty wide variety though sometimes it is hard to tell during the beta because you will have massive hordes of them all piled on top of each other trying to get at you. in those cases you do whatever aoe and crowd control your class allows for and just watch for critical hits to thin the herd so you can get a better look at them. In a beta, especially one with press and pre-order invites, it is usually more about showing off mechanics and variety so if you find yourself in the beta and not sure if you like the massive hordes or level builds don’t give up on it, they are simply trying to showcase elements of the game. 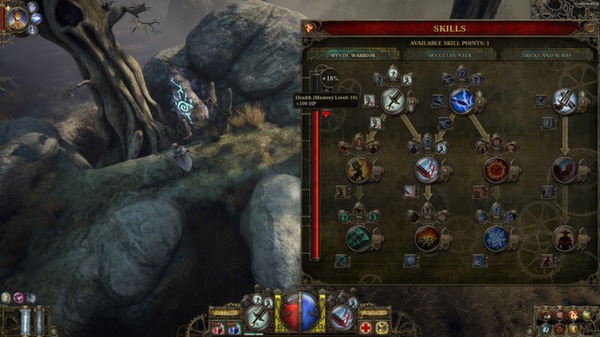 Characters are highly customizable through skill trees as well using points earned leveling. The category sheets are are basically melee, ranged, tricks and auras and each one has an unlockable general trait with upgrades and refinements available. So for example your gunslinger might have explosive shot which can be leveled to 10 but it also has refinement bubbles around it such as hex round or shrapnel that you can put a point into to add that damage to your explosive shot when you use it. Auras are passive effects that can be activated so that using mana might give you health or increased range and damage. WoW players who have rolled hunters have a pretty good idea about what this is like. In these ways when combined with random equipment drops it is very easy to have two characters of the same class with completely different builds and play styles.

When it comes to single player play there is storyline and scenario, scenario is specialized maps with harder enemies and higher loot drops. There are level requirements but it is a great way to gear up. There will be multiplayer modes that include games you can start or join but those aren’t currently available in closed beta. Hopefully this will be set up very similar to Diablo.

First Round:
I played the closed beta a few times to get a feel for the game and so far I like what they are showing us even if it is less than an hour of play. The classes look nice, the graphics look great and the play is great with funny touches added to the quests. The Incredible Adventures Of Van Helsing 2 is a game to watch for to get a Diablo style dungeon crawler with it’s own feel and it’s own $14.99 price tag.
(note: the graphic below is a nice comparison but is somewhat dated with six character classes available in the new Van Helsing title) 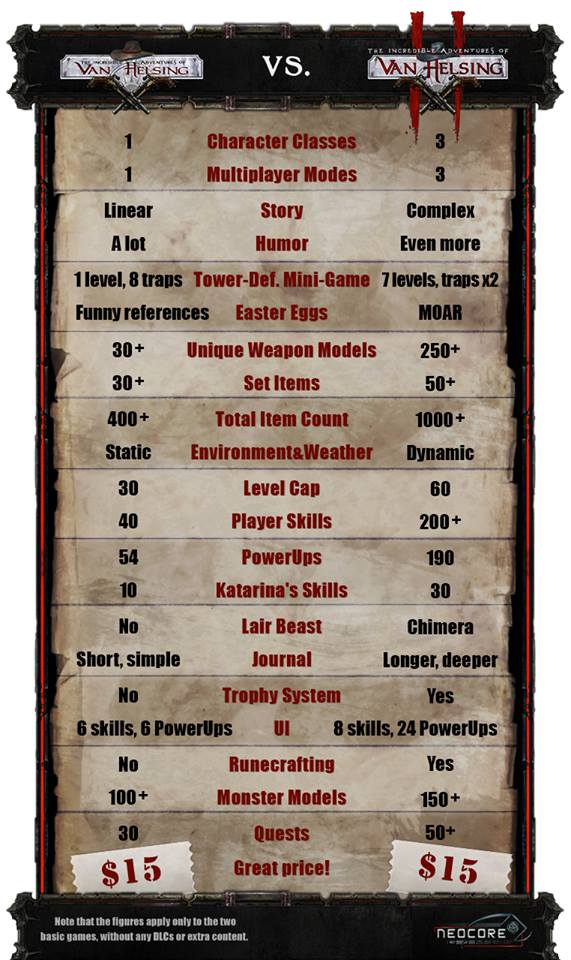