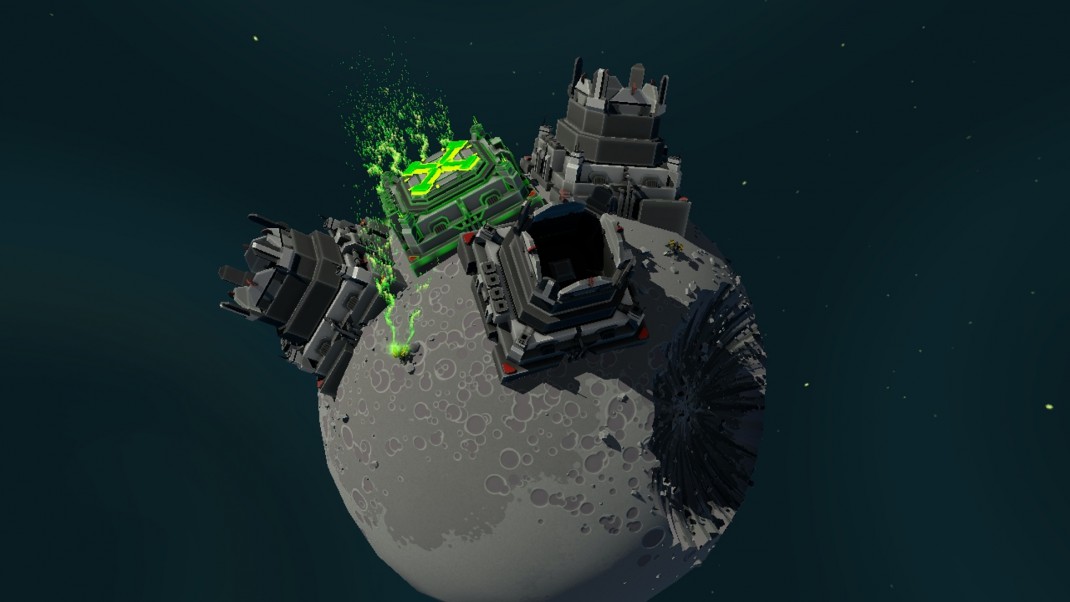 Planetary Annihilation is a real time strategy game that can cover an entire galaxy, and not just one map. Readers of this site will know that rts games and I don’t always go hand in hand down a tree lined lane. It’s more like the rts takes me out for a drag over glass laden asphalt streets. So expanding the map to include various planets, moons and asteroids was very difficult for me, but a damn blast in looking at and trying to play. This is what makes Planetary Annihilation unique, the ability to expand your army to outer rim planets, and then bombard the other systems by using massive weapons, or even by launching asteroids. If your enemy has completely entrenched themselves on a planet so that you cannot remove them using conventional forces, then blow up the planet with an asteroid strike.

Moving your armies around a planet works the same as it does with most rts games, click and drag then select with the left mouse button. However, with these types of maps, you have a unique situation to ponder over, what type of terrain the planet is. On some of the planets, land forms can help protect your base from invasion from a certain direction, with other planets, there is no protection from any direction. One of the planets I played on was a created planet, with large canyons through part of it, but created an interesting dynamic in that my enemy could technically invade me from any side at all, since all they had to do was walk their armies around to the other side of the planet to invade. I had to set up my defenses literally in a 360 degree arc and “circle my wagons”.

The actual game play of Planetary Annihilation is fairly generic rts style stuff. You have a commander unit that runs your entire military, and once that commander is defeated, the game is over for you. For resources, you can mine metal or harvest energy through buildings, then build up your defenses, armies, and base by creating troops and buildings. All of this is pulled off flawlessly during the game and feels very intuitive, especially if you have played any other type of rts on the market. Your armies can take to the air, land, sea, or space depending on what theater of war you need to fight in. The planet you are currently on will help determine the type of force you build, a navy is completely useless on a desert planet, and so on.

Currently, Planet Annihilation does not have a campaign to play, so if that’s your thing you may want to watch the development to see if one is forthcoming, but it does offer single player or multi player skirmishes that can occur over an entire galaxy of planets and involve up to 40 players. Planet Annihilation can also be played offline, but you will be missing out on some very cool and massive galactic wars. Another interesting feature of Planetary Annihilation is that there isn’t a cap limit built in for troops, like in other rts games. If you have the materials and energy, you are creating the troop. This allows for some epic armies to be created and sent out to various planets. However, this also causes another issue for me, and that is army management. It was hard enough for me to maintain a single army in Starcraft II, let alone five armies fighting on five different planets, plus my orbital stations and my asteroid flinging unit on the outer rim. I would reach a point to where my army was just too big for me, personally, to manage it, but it was cool to have.

The sound and the art direction right now are heading in the right direction. With the Kickstarter funds, Uber Entertainment was able to get a full orchestra to do the soundtrack, and it sounds very nice. The aesthetic of the game, at first, looked fairly simple to me. Then as the action began, the visuals began to show their true nature, with great looking explosions and massive craters left when something big blows up to really give you a neat looking game. What the game lacks is character, and by that I mean someone to be the face of the franchise or someone to get behind. The armies are all designed to be the same look visually, except for the commander which can have different skins. But all the armies are essentially, mechanoid, with no real difference between them except for color. A little variety in military can go a long way, and the development of characters that the audience can care about can create a new franchise.

Now, onto the issues that I personally had with Planetary Annihilation, and thankfully they were all bugs. First off, the game is absolutely unplayable in full screen, with a 32 bit system and an AMD video card. You just can’t do it, there isn’t a cursor to select anything in the menus when played this way. Thankfully, the game plays just fine in windowed mode, so you can work around it. I also suffered from various slow downs and complete crashes, just getting into the game. The software would completely lock up on me and had to be restarted. Again, this is all playing an unreleased gamma build of the game, and could completely be fixed even at the time of this writing. Uber Entertainment is collection all of these bugs and working to fix them prior to release.

Planetary Annihilation is a massive undertaking for an independent game developer, but with funds from a successful $2.2 million dollar Kickstarter, the game is coming along quite nicely. What is there right now is fun and really interesting to play, and then allowing the community to mod Planetary Annihilation can only mean that there could be some fantastic and unexpected new things in it’s future. Keep your eyes here as we follow Planetary Annihilation into it’s last legs of development.