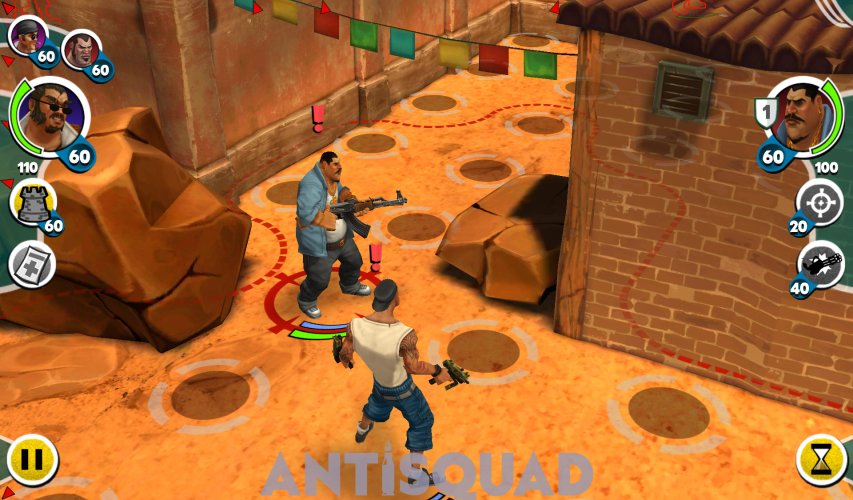 Growing up on “The A-Team” and, in more recent years, having discovered great graphic novels called “The Boys”,  I like the rough rabble – the misfits that do right in their own way.  That was often how I felt as a young lad, I would generally fit in with small groups of folks, I was a geek from the age of six when I got my first Atari but I always tried to do the right thing.  So when I hear about a game that has these general themes I am always quick to want to give it a play, add to it that the game is under five bucks and I was really excited to get my hands on AntiSquad. 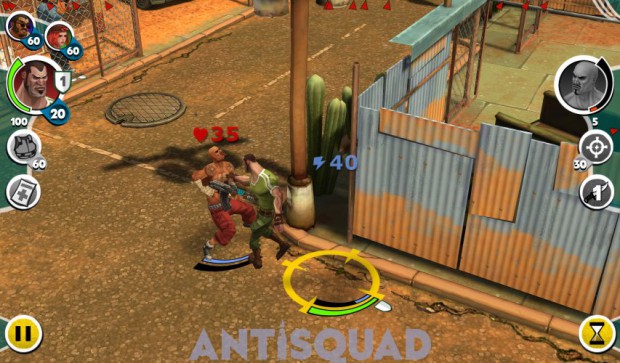 Description:
Widely known in small circles as AntiSquad, they are a military tactical response unit. These hardened military professionals, tired of bureaucracy, politics and serving the armed forces, have established a private paramilitary formation located in south United States. Being true military professionals, they periodically execute contracts for jobs that may not be considered “clean”.

The Team consists of many complex individuals with their own back story, but they do not shun mercenary applicants. Members of the team are idealists; they dwell on moral issues, as well as question blind nationalism, etc. AntiSquad strongly differ from military units. They truly are a bunch of contradictions put together – heartfelt cynics, gregarious egoists, aggressive pacifists, and phlegmatic rebels all under one banner.

Features:
• Turn-based tactics… The game is yours to command
• Stunning visuals… It pleases the eyes
• Fascinating story… To tell before bedtime
• Memorable characters… It’s hard to pass by without noticing them
• Character specialization… Choose your path
• A wide variety of gears and weapons… For each taste and colour
• Challenges and Achievements… Making it hard for you
• Atmospheric soundtrack… Hear the sound of awesomeness?

Hands On:
So, first off it is important to let you know that this is a turn-based action point game, also often referred to as a hexagonal game. These are great for pick up and play because after your turn you can set it down and come back to it easy enough and you don’t have to worry about clicks per second or a fast AI. Once you get the hang of this type of gameplay it is always relatively the same with just differing environments and interfaces. You get a certain number of action points which are divided up by your movements and your attacks. Generally, the less you move the more you can attack and if you do maximum movements you have no points left to attack. Special abilities use higher action points than standard abilities and attacks.

Once you know and get used to all of that it comes down to a game of strategy where you try to make better use of your action points than your opponent. Everything else is technically just setting and stage, but it is in the fun involved with the setting and stage that can make one turn-based strategy better than another. I have played some that were a decent challenge and enjoyable but got a bit boring after a while. That’s where games like AntiSquad shine, the fun characters and the cool looking cartoon/comic graphics keep you playing because you want to get these charismatic characters through the mission and onto the next one. It is easy to lose track of time as you set up one of the characters for their special attack or try to get the whole team past some big nasties with bigger guns.

Each character represents a different character class, which they personify with their attributes. Rose is a scout, with a high movement per action ratio – she is less of a fighter and more of a runner. Cactus is a sniper, he barely gets any movements per action at all but his attack range is huge. You also have machine gunners, explosive experts and balanced action and attack characters all of which have their own personalities to match abilities. It’s the personalities that really separate this game from others of the same genre so that you feel like you are playing a turn based “A-Team”.

AntiSquad is a solid game with fun characters that keep you coming back for more. These kind of games make you think without realizing it because the only way to win is by strategy but you just feel like you are trying to get Teddy, Rose, Cactus and the others past the Cartel. This is not only a great example of turn based strategy done right but at $3.99 it is a virtual steal. AntiSquad is available now on Steam Early Access, and I can’t wait to see how it turns out in its final, retail version.