I am definitely the gadget guy of GamingShogun.com, when I hear the whirring of little machines or flashing lights, I’m drawn in like a moth to a flame. As a result, events like CES can be a hazardous for me as I am pulled in so many directions at once. A good example of this was walking into the North Hall of the Las Vegas Convention Center and seeing a remote control helicopter go zooming through the air in front of me. If they had held up a flashing sign saying “Come Look At This!” I don’t think I would have been pulled over faster. Arriving at the Griffin booth, I saw they were trying to fly the chopper through a giant “G” hung in the rafters and circling a track with a bunch of RC cars. They must have thought I was a stalker I stopped by so many times over the week. Once I got the chopper and car home the next challenge was stopping from playing with them long enough to write them up. 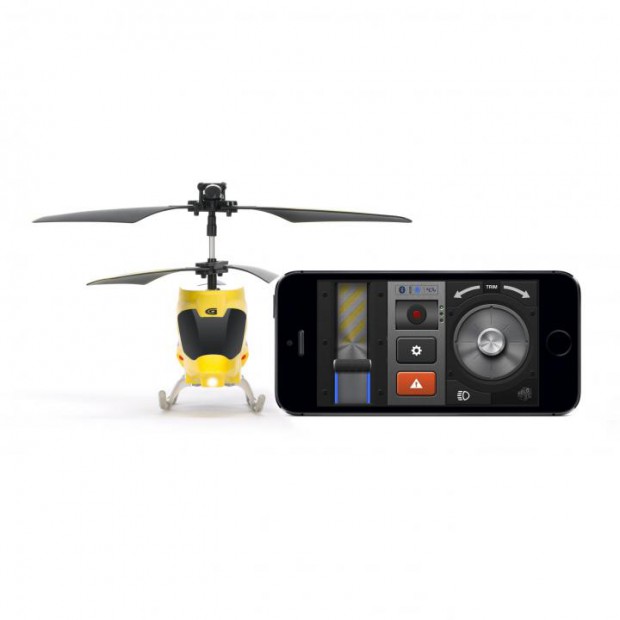 Hands On:
Griffin has been in the RC helicopter game for a few years now and they just refine them more and more with every generation. They have been using cell phones as part of the controller for years but with their latest offering, they have been able to refine the process even more. The system required an attachment to your phone volume jack that would receive audio cues and translate them into movements. Now there are no more attachments and everything is controlled via Bluetooth technology. As a result all you need to do is download an app, turn on your Bluetooth, fire up the Helo TC and away you go! This makes the system really portable and quickly playable, which are two issues that can cause other RC mini-copters to spend more time on a shelf than in the air.

The versatility of controls is another reason this copter will get lots of air time. The virtual controls are easy to get the hang of and provide the sensitivity you might want for buzzing obstacles in tight flybys or you can go with tilt control using your phone and make the controls hilariously entertaining to watch. If you have never seen someone use tilt controls with a phone they tend to tilt their body as well instead of just their hands, in this case the chopper is parroting the movement as well. Luckily the Helo TC is made with a metal interior frame because unless you have a VERY roomy space to work with the chopper is gonna crash a few times while you get used to tilt controls.

One of the things that really sets this helicopter apart from others is the ability to record flight plans. I love this idea because once you get good at controlling it you can record some crazy cool flights around obstacles and through different rooms and save it so that later all you have to do is set the helicopter down in the same place, choose your recorded flight and then watch it go through the motions while you watch. If you want to have fun making movies using the Helo TC you can know where to record and record multiple times to edit them together and as long as their isn’t too much environment changes between flights they should edit together really nicely. You just start the flight plan and do whatever you want around it. Plus you can have three recorded flight plans, that’s three scenes in your movie to work with!

Last Call:
I’m a huge fan of the simplicity of getting started with and the versatility of the Helo TC – both in its controls and its programmable flight plans. I’ve been injured lately and laid up a lot and yet I can still take the Helo TC Chopper off from my bed and fly it around the room. The more mobile I am the more possibilities of use open up with Helo TC, I don’t think our readers have seen the last of it, I have cinematic plans for this baby.

(Note: this video shows the older version of the Helo TC when the plugin remote was still required, but it is a great little movie!)