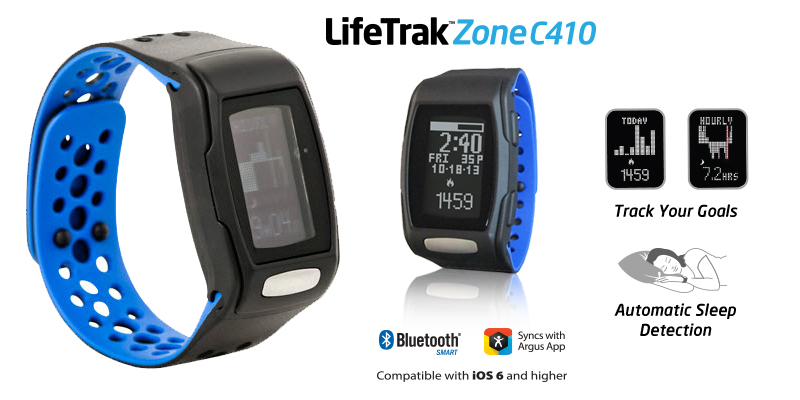 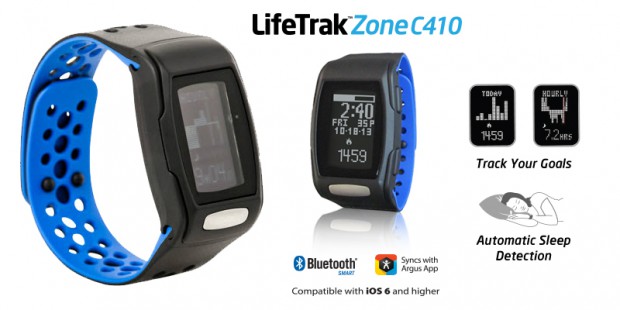 Fitness bands and other types of wearable fitness tech have become all the rage. In fact, while visiting CES in January, I discovered that there was an entire sector of the convention hall floor dedicated to these fitness trackers. The most intriguing device I saw was from a company called LifeTrak. They had a wearable fitness band that aimed to replace something that I use every day: My watch! Their Zone C410 fitness device does everything you could want from a fitness tracker as well as tell you the time and date. Designed to be a watch replacement, the LifeTrak Zone C410 looks like, well, a watch. It features a small LCD display that gives you time and date information and a reversible/removable watch band that can fit just about any wrist. It’s also fairly rugged. I usually wear a G-Shock Pathfinder watch which is ruggedized like a freight train, very capable of taking a real beating. While the LifeTrack Zone C410 is not as impact-proof as the G-Shock Pathfinder, it is definitely well-built and has not shown any scratches – even after a few, unfortunate bumps and scrapes.

Setting up the LifeTrak Zone C410 for use is a straightforward process. Unlike most fitness trackers on the market which use rechargeable (but short-lasting) LiPo batteries, the Zone C410 features a real watch battery that has an estimate life span of about a year. This again lends itself to being a watch replacement, as having to take off and charge your watch every night would lead to a lot of people giving up on it and just wearing their normal timepieces. The setup screen is easy to navigate using the Zone C410’s three buttons and once you enter your height, weight, and age information, you are ready to rock and roll. 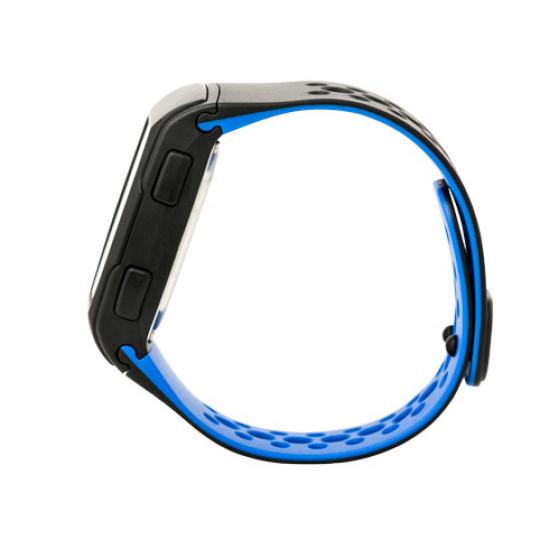 The LifeTrak Zone C410 interfaces with your smartphone via Bluetooth synchronization, which uses the Argus health tracking app on the iOS app store (the Android app is coming this Spring according to LifeTrak’s website). The software is easily the toughest selling point of the LifeTrak Zone C410 as the Argus app is not quite as full featured as I would like. Food tracking isn’t well implemented and the app, for some reason, won’t combine or average calorie and step measurements from its internal sensors and the Zone C410. As I understand it, LifeTrak is going to be putting out their own fitness app at some point, so I am excited to see how that turns out. In the meantime, I would love to see some integration with MyFitnessPal, etc, but I digress. The company is also working on an API to create apps which can access the device, so that is another point of hope in terms of getting the Zone C410 more widely integrated into various fitness apps.

Of course, the LifeTrak Zone C410 monitors your heart rate, caloric expenditure throughout the day, steps taken, distance traveled, and even has a workout timer so that you can monitor your pace while running. Something to note is that that LifeTrak Zone C410 uses your heart rate in calculating your calories burned – something that most fitness trackers don’t take into account. On the home screen of the watch, you will find not only the date and time but, also, whatever your currently selected metric is to be displayed (sleep length, steps taken, calories burned, etc). There is a bar on the top part of the display that “fills in” as you get closer to your goals for the day. These goals have default settings but can also be set manually through the setup menu system. 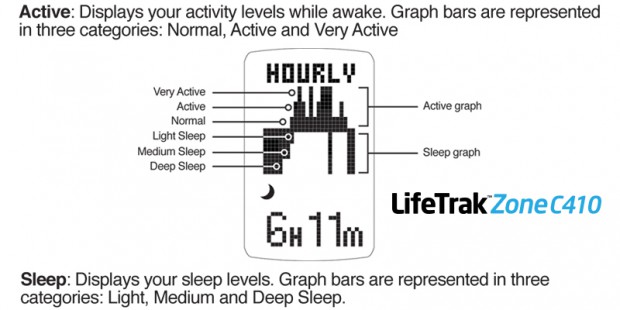 Automatic sleep tracking is one of the new features on this LifeTrak fitness watch, and it accomplishes this light years better than other fitness devices I have seen. The Zone C410 uses the principle of actigraphy (micro-movements) to determine when the user is at rest. In the morning, I am consistently impressed with how long the Zone C410 says I have slept. It is just eerily accurate. By pressing the upper-most button on the Zone C410, you can see your actigraphy graph for for the past 24 hours. Using a simply bar graph, it shows how active you were during sleep (as well as in waking hours). It is cool to see how the graph changes based on how restless you were throughout the night. Oh – I almost forgot to mention that the Zone C410 is waterproof down to a depth of 30 feet!

Retailing at a very reasonable $99 dollars, the LifeTrak Zone C410 is an incredibly-capable fitness watch that rivals – and, in many cases, bests any other fitness tracker on the market today. Its biggest hurdle at the moment is is getting wider acceptance in the app department. Once that occurs, however, the LifeTrak Zone C410 will easily be crowned as the king of the fitness band hill. 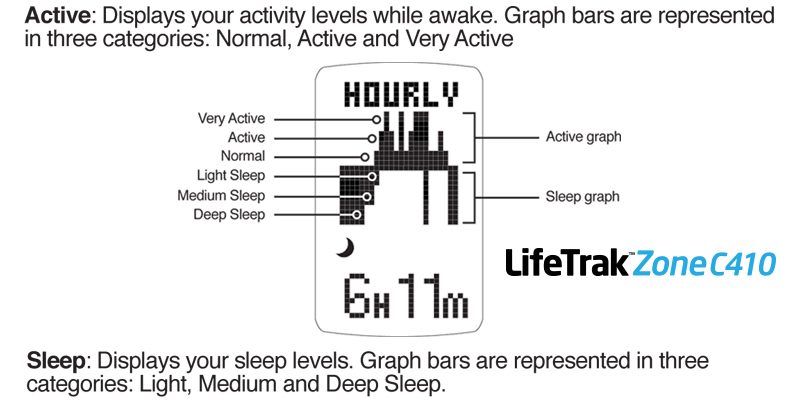 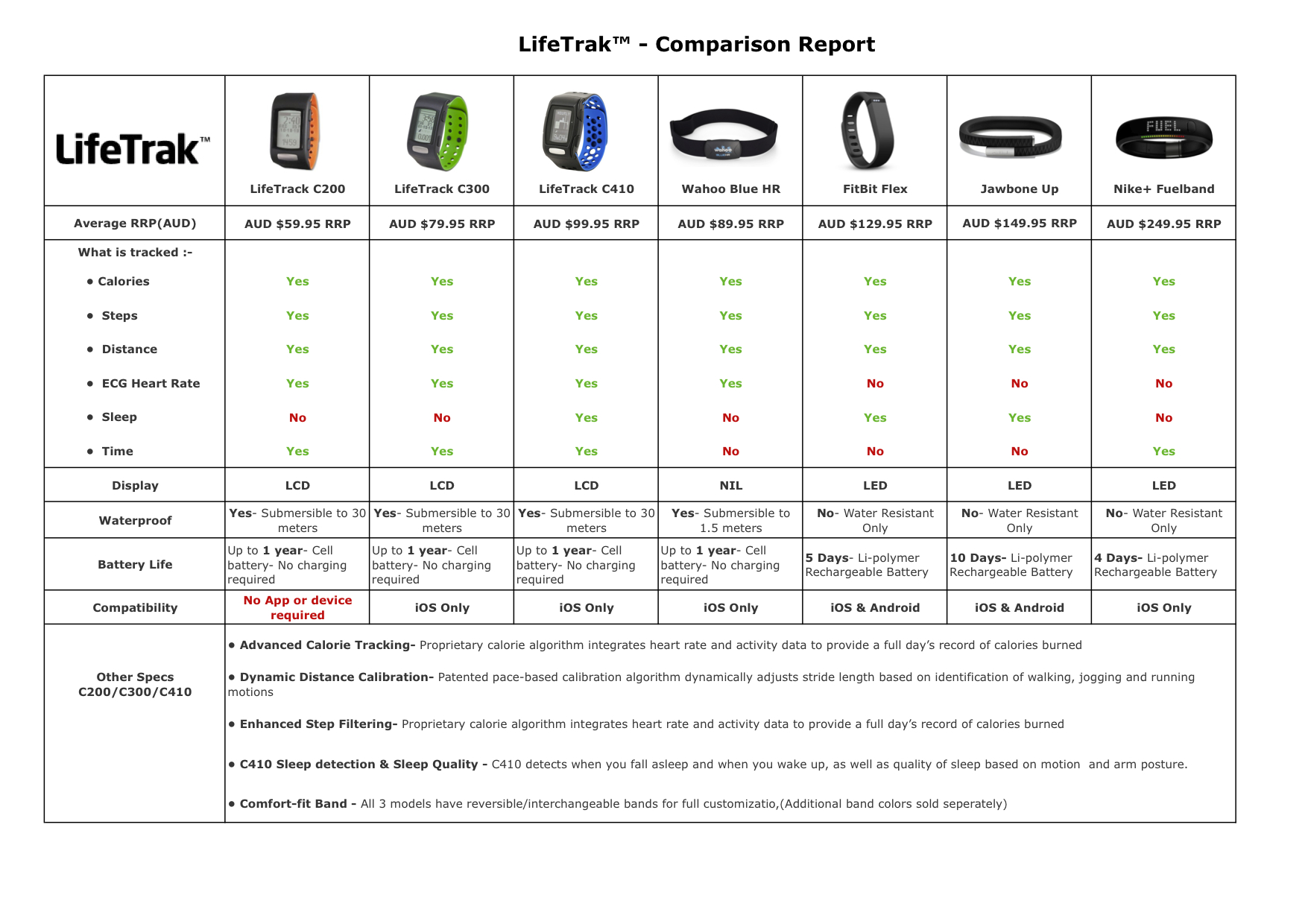