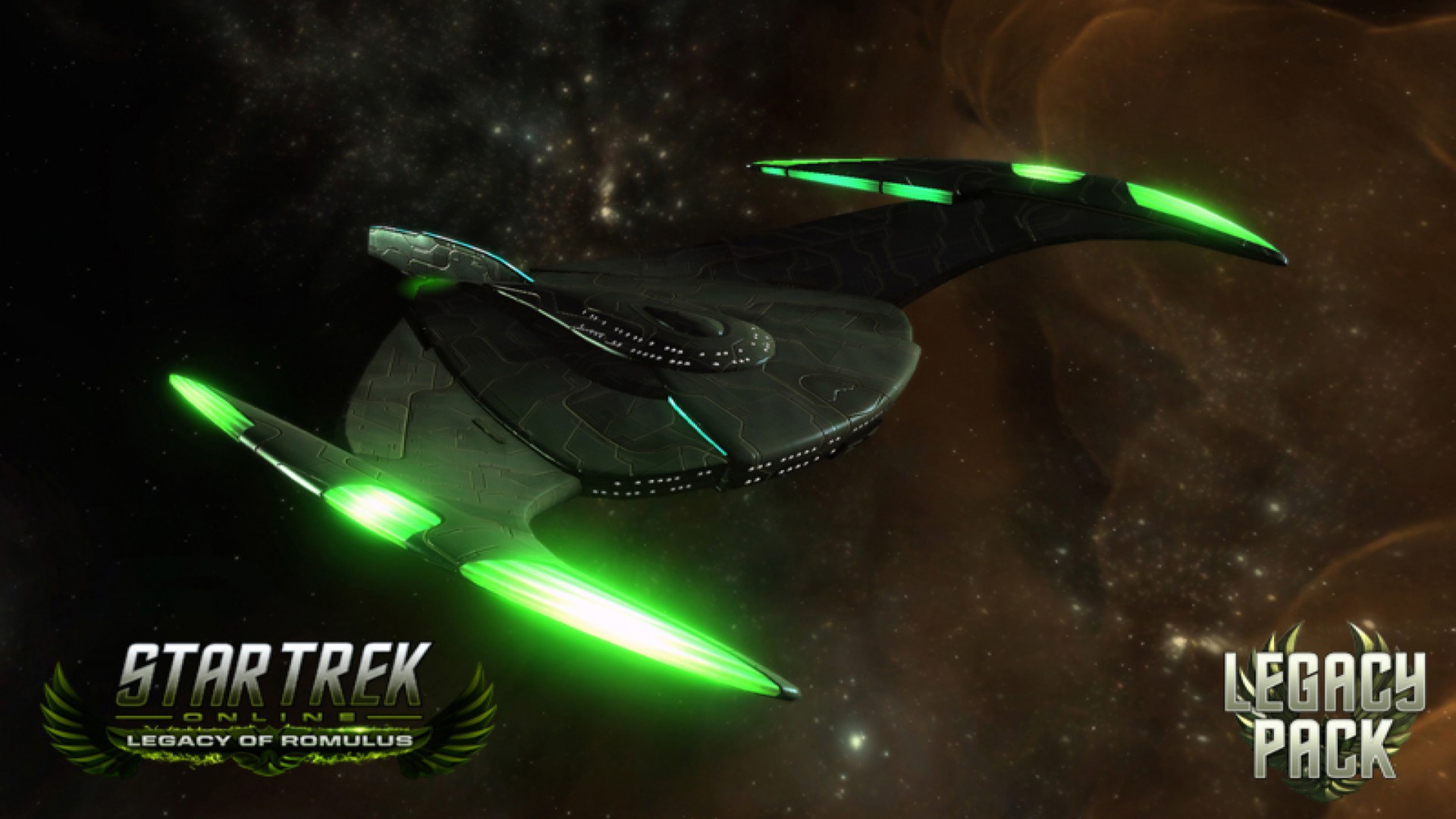 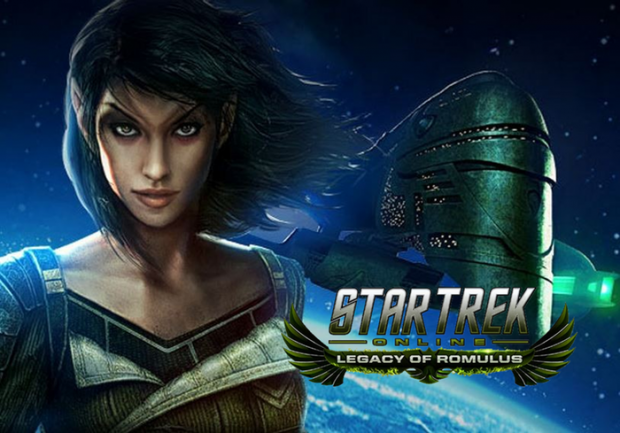 The Romulans.  Their name is as familiar in the Star Trek lexicon as the Borg or Gorn (nothing can be more familiar than Vulcans and Klingons) and yet few outside of the Trekkie life could tell you anything about them.  If you remember Star Trek: Nemesis, you got a look at their ships and would probably say “oh yeah I remember those” if someone showed you a picture – but, they really haven’t grabbed the mainstream’s attention and even some folks who consider themselves Trekkies might have to struggle to tell you anything about them.  The time for worrying about that has decidedly come to an end as Star Trek Online has started the Legacy of Romulus storyline to bring you in touch with their culture, their history, and, most enjoyably, their rich assortment of ships.

Description:
Romulus and Remus are gone. You are one of the survivors, struggling to survive in the aftermath of unspeakable destruction. These are dark and dangerous times for your people, as the Tal Shiar crack down on any dissent and mysterious beings unleash terror throughout the far-flung colony worlds.

You will be the one to reshape an empire. Gather allies, go undercover and find the proof that will rally your people to revolt. Together, you will rise up against an oppressive regime and demand freedom. You will fight for your people.

You are the Legacy of Romulus. 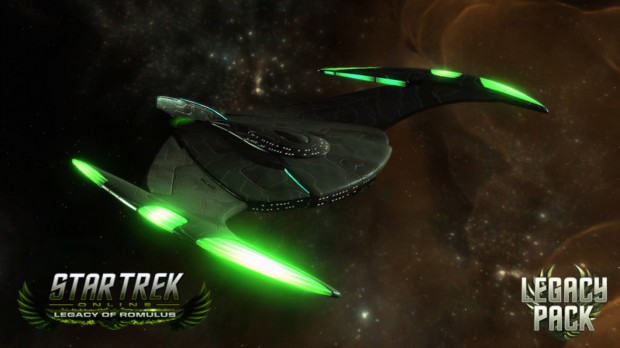 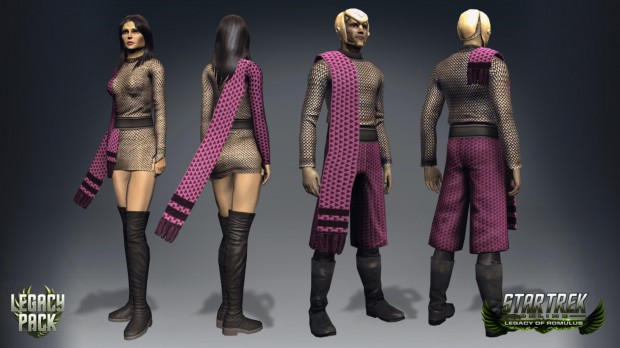 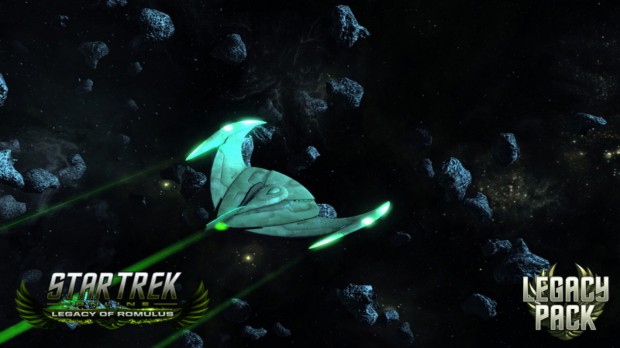 Hands On:
Star Trek Online is one of the few “free to play” MMORPGs that has not just survived – but thrived.  An outsider would probably point to the huge and loyal Star Trek community as the reason for this and they wouldn’t be completely wrong. The devoted trekkies can be found playing in great numbers.  Subject matter alone cannot save a game or keep it thriving though as some games based on some very popular and enduring universes (SWTOR, DC Universe Online) have stumbled and struggled to keep their top titles going.  What keeps Star Trek Online going so well is two main things: Dynamic gameplay and great, constantly arriving story lines.

Star Trek Online has both intense space battles as well as ground fights to give you the entire feel of the universe.  If it was only a space battle game, there would be plenty of happy players because of all the customization of ships and the number of them available.  If it was just a ground battle game, there would be plenty of happy players though I think with the subject matter only having ground combat would have been the death of the game.  Smartly, STO gets you in a ship flying around quick, gets you tasting the ground and space combat and does it all while spinning good storylines.  You can hop on and jump in a quick space or ground battle but it’s when you really sit down for a full session and take in some of the storyline that you begin to feel like you are participating in an episode and season of Star Trek.

Legacy of Romulus is a great step towards furthering the STO universe with fresh playability and a storyline about a familiar but not overly known race.  The writers put a lot of effort into telling this story of the Romulans and making them not just sympathetic enough to want to play but to become passionate about it.  I won’t go into story spoiling, that is one of my pet peeves, but I will say is that it is as enjoyable as any of the series were, more so because you become part of it through gameplay.  You don’t have to be a trekkie to appreciate it or understand it, you just have to be willing to take the voyage. 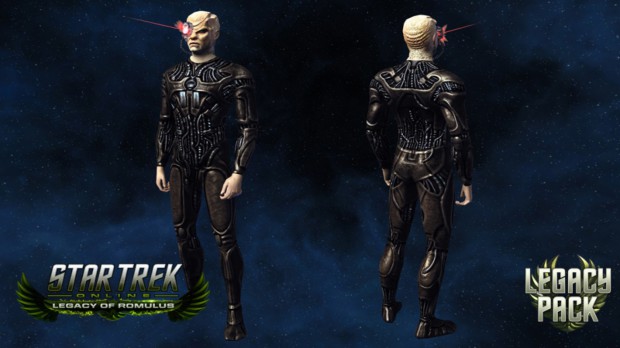 Released along with this expansion was the Legacy Pack, a gameplay addition that is not required for the story or free to play action.  If you are really serious about this game and want to really feel the power of Romulus you will probably want this game pack.  To say “wow!!” about what is included in this package is an understatement.  You get 10 ships in the pack, 30 master keys (for unlocking random treasure boxes), special officers for your ship and away team, uniforms and exclusive titles for use in game and forums.  Two of the ships you will recognize quick from Star Trek: Nemesis and the ships are a purposely wide variety of types to take on multiple mission challenges as well as PVP and PVE.  Having seen pretty much every ship in the game at this point (though only previously able to afford three) I can also say these are some of the nicest looking designs in the entire game, though Romulans have often been known for their sleek ships and strong ale.

Master keys are huge in the game because they open boxes that have random chances of common to rare items, among the rare being ships.  If you want to set yourself up with some in game currency quick selling one or two of the 30 keys you get will set you up with some decent dough to start out with while still giving yourself plenty of keys to try your luck with.  One of the new improvements is that the latest boxes are just one kind whereas before you got common, uncommon and rare boxes and nobody wanted to waste their keys on common or uncommon so they generally got trashed or dumped in fleet banks (fleets are Star Trek versions of guilds or clans).

STO tries to help players get as original with their characters as possible through customization of ship look, colors, internal builds and names.  The strongest point of individuality though is through uniforms , titles and character features so the titles and uniforms in the Legacy Pack will be a popular addition to many player’s customization. 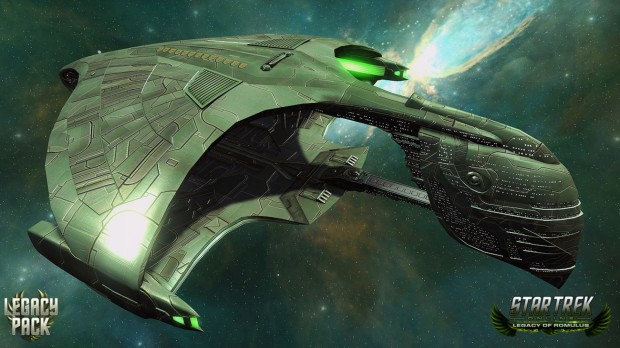 Last Call:
You don’t have to be a trekkie to appreciate the Legacy Of Romulus storyline added to Star Trek Online and if you can afford it I can’t recommend the Legacy Pack high enough.  If it is a bit above you budget the Starter Pack will give you a taste of Romulus at a very affordable price but beware… you may find yourself craving more and the Legacy Pack includes everything that is in the Starter Pack so you might wind up buying things twice.  If neither is within your price range Star Trek Online is still free to play, fun to play and a great set of stories to take part in.