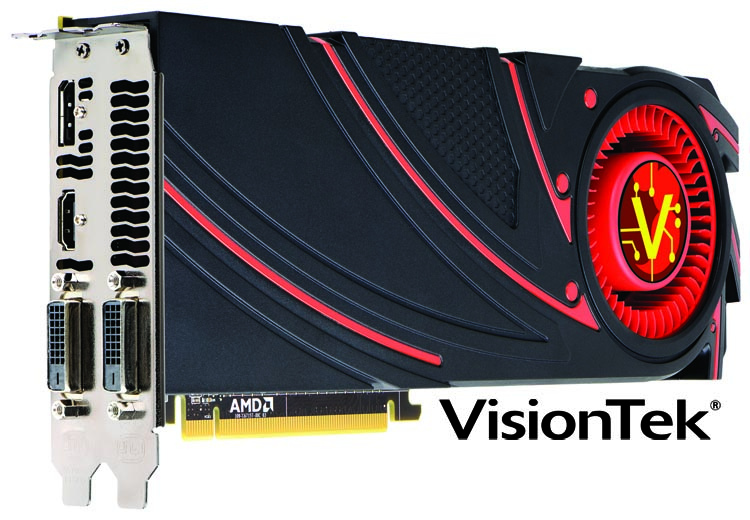 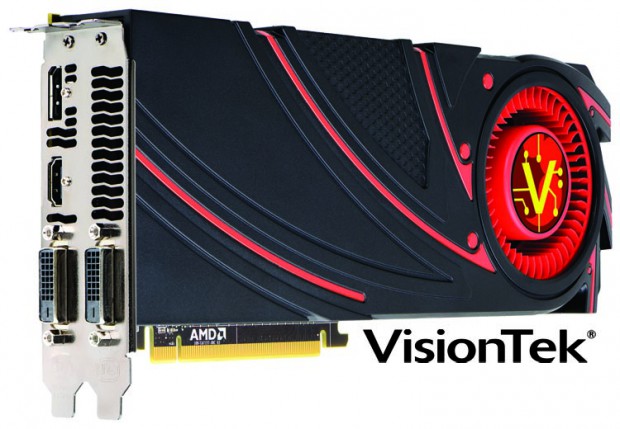 Because the VisionTek R9 290X utilizes AMD’s Graphics Core Next (GCN) Architecture, which unifies graphics processing and compute cores for higher utilization, this ultra-performance graphics card can deliver over 5 TFLOPS compute performance – a new standard in the graphics card industry – and over 300GB/s memory bandwidth to support 4K gaming with over 100 layers of effects.

Overclocking the Smart and Easy Way

By accessing the Boost State control within an easy-to-use card management GUI, the VisionTek R9 290X can be set to automatically run higher than the base core speed if it is operating below power, current, and temperature specification limits. The card also features two additional automatic performance boosting features.  AMD PowerPlay(tm) Technology adjusts clock speeds in response to GPU load for energy use efficiency while AMD PowerTune Technology maximizes performance under load conditions by increasing the GPU engine clock to take advantage of unused Thermal Design Power (TDP) headroom.

See What You’ve Been Missing with 4K Resolution

The VisionTek R9 290X supports Ultra HD 4K (3840 x 2160) resolution, which is 4x the resolution of 1080p. Typically, configuring a graphics card for use with a high resolution monitor must be done manually. However, AMD’s Catalyst(tm) Graphics Drivers will perform automatic configuration on select popular monitors, such as the Panasonic Viera(r). Further simplifying the ability to use 4K displays is the card’s use of AMD Eyefinity(tm) technology which can span multiple monitors into one large panoramic display.

Hear What You’ve Been Missing with TrueAudio

With an onboard audio processing chip powering AMD’s TrueAudio technology, the VisionTek R9 290X can deliver accurate 3D surround sound within games and special audio effects like reverbs and room simulations while reducing CPU load. Now you can hear more real-time voices and situational sounds in-game with any and all audio hardware already owned.

In a recent performance benchmarking preview publically conducted by AMD, two leading graphics intensive games, BioShock Infinite and Tomb Raider, were both run on the same test machine at 4K (3840 x 2160) resolution settings on the Radeon R9 290X and the NVIDIA GeForce GTX 780 cards. The only variable to the tests was that the R9 290X was run in “Quiet Mode” setting, the less aggressive of two performance profiles that are user selectable via a toggle switch on the card. Below are the results of the $649 street price GTX 780 versus the $549 MSRP R9 290X:

A History of Performance Innovation

Outperforming other GPU powered brand graphics cards is nothing new to VisionTek. By choosing AMD as its exclusive GPU partner, VisionTek has enjoyed a history of establishing new standards of performance capabilities from its graphics cards:

“VisionTek is a critical launch partner and has been a trusted AMD graphics partner in North America for over ten years,” stated Matt Skynner, Corporate VP and General Manager of AMD’s Graphics Business Unit. “AMD is proud to support VisionTek’s branded launch of our high-end R9 290X and R9 290 technology. Expect big things out of VisionTek…these guys never settle!”

“Our new Radeon R9 290X graphics card truly is a game-changer that raises the bar on what defines the gaming experience,” said Mark Bilson, Executive Vice President of VisionTek. “AMD has outdone themselves with this GPU when you consider its visual, audio, and automatic performance adjusting capabilities. And when you consider our card will outperform the competition while saving you $100, as Duke Nukem would say, ‘game over’.”
For more information on the new VisionTek Radeon R9 290X graphics card, or the existing VisionTek graphics card line which includes VisionTek’s recently announced R7 and R9 series cards, visit: www.visiontek.com<http://www.visiontek.com>.

Follow VisionTek on Twitter<https://twitter.com/visiontekprod> and Facebook<https://www.facebook.com/VisionTekProducts>
VisionTek is a registered trademark of VisionTek Products LLC.
Apple, Macintosh, and Mac are trademarks of Apple Inc., registered in the U.S. and other countries.
AMD, Eyefinity, and Radeon are trademarks of Advanced Micro Devices, Inc.

Windows is a registered trademark of Microsoft Corporation in the United States and other countries.

Panasonic Viera is a registered trademark of Panasonic Corporation Inc.