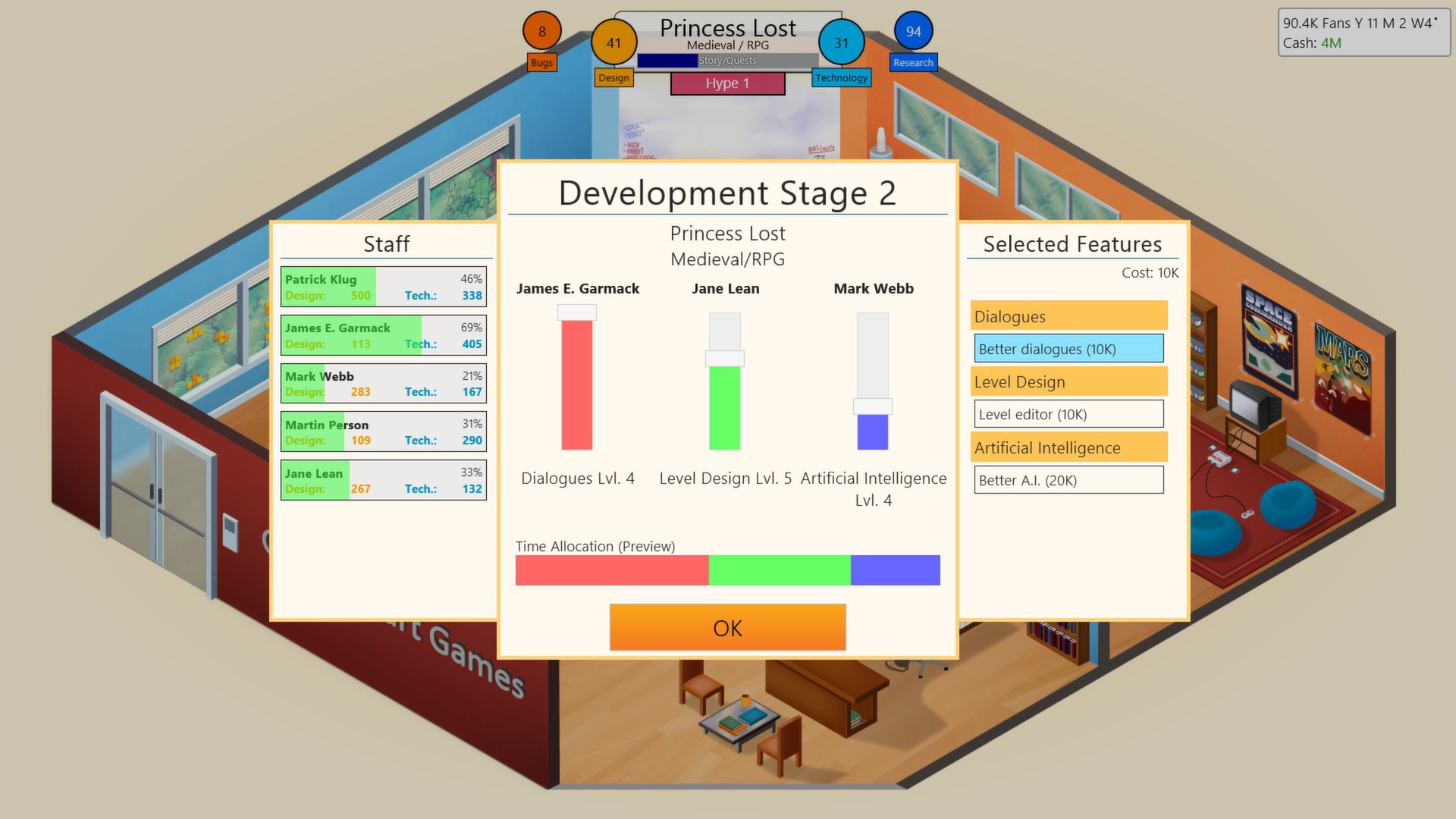 Plenty of you readers out there have probably heard of Game Dev Tycoon, even if you haven’t played it, because of the humorous way GreenHeartGames dealt with folks who pirated/cracked the game. They knew they would get pirated/cracked, even at the incredibly affordable price of the game – so, they did a preemptive strike.  They went on the net and uploaded their own specially-coded, cracked version of the game to pirate sites and waited.  This was the first, somewhat discouraging result: 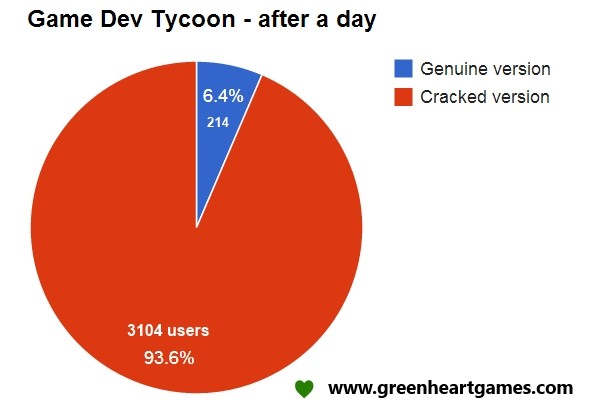 When you are a little indie game developer, it’s sad to see your game getting stolen on such a massive scale. Or, so it would seem. Then, these kind of posts started filling the web… 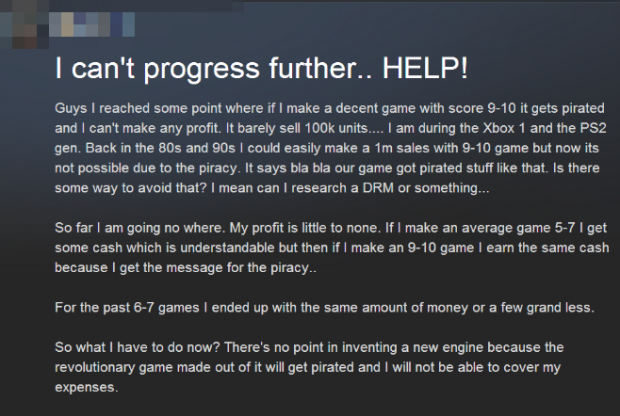 …and the developer’s revenge eventually sunk in.  All cracked versions of the game were coded to have the games players develop become victims of piracy and make no money.  Those who purchased legal copies, however, got an in-game email message thanking them for their support.  I still get a laugh that this message, and those like it, can still be found on discussion boards. The game’s community, which grew and rallied after the trick was revealed, are quick to point out and chastise those who aren’t will to pay less than $10 for the game.  I’m just glad that it became part of Steam Greenlight so I can give it a play and review!

Description:
Start your adventure in a small garage office in the 80s.  Enjoy the hand-crafted level design while you develop your first simple games. Gain experience, unlock new options and create your first game engine.  In Game Dev Tycoon the decisions you make during development really matter.  Decide which areas you want to focus on.  Does your game need more gameplay or should you focus more on quests?  These decisions will have a major impact on the success of your game.

Once you have successfully released a few games you can move into your own office and forge a world-class development team.  Hire staff, train them and unlock new options.  With experience and a good team, you can release larger, more complex games.  Larger games bring new challenges and you will have to manage your team well to deliver hit games. 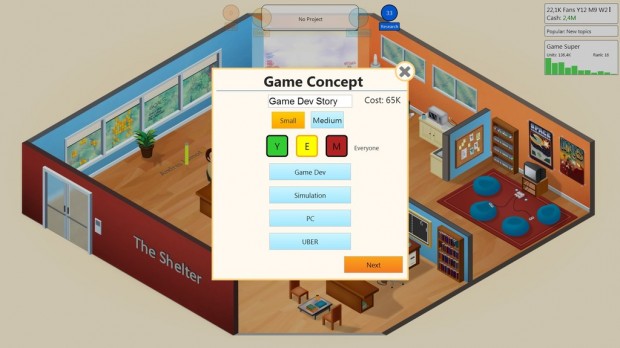 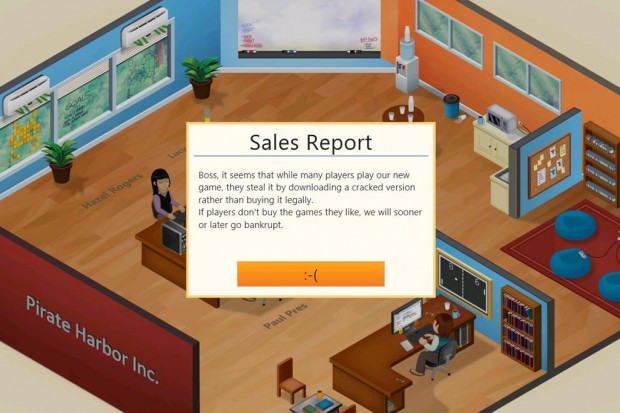 Hands On:
When I heard about this game I laughed at what the developers did but wasn’t really sure what the appeal of the game might be, if you wanted to make games why not just make real games instead of playing a game about making games.  When I got hands on though, I immediately saw the where the fun was – Game Dec Tycoon is a very fun sim game with realistic issues and developments with a strong puzzle element.  You have to choose what the topic of your game will be about – topics such as horror, UFO, fantasy, etc. You have to select what type of game you are creating, such as adventure, simulation, strategy. You have to select what game engine to use as well as what platform to develop it for.  The right combination of all these at the right time will please both the AI critics, who review your games on a 1-10 scale, and the masses who buy your games. Sales, of course, will result in loads of money for research, business expansion, and more employees to work on your games.  A bad combination and the critics kill you in the reviews, nobody buys the game and you lose money – too much and it is bankruptcy time and a big game over.  You have marketing strategies, engine building, and market analysis to consider. You even have the game’s version of E3 (called “G3”) to decide if you want a booth at and how big. 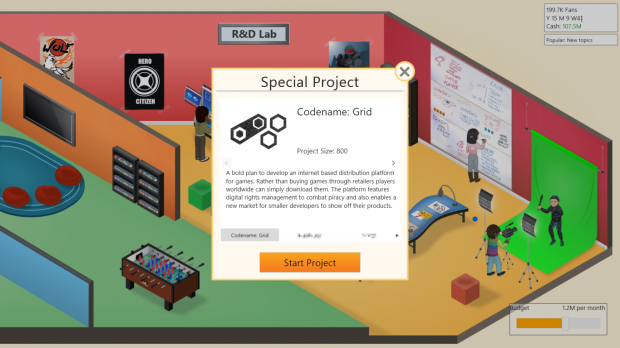 With this much detail, the game could border on requiring a serious sim player to get the most out of it. Thankfully, it is presented in a very user-friendly manner. However, I still think it might appeal to the occasional sim player because of how quickly you find yourself getting behind your projects you have created and wanting them to succeed.  You will lose this game when you first start playing – probably quite a bit. But, each time, you will get farther into the game and you are able to transfer over what you learn from one game to the next. There is definitely a rush when your project winds up scoring some 10s and you suddenly have the cash flow to do new things.

Last Call:
If you like a great sim with an excellent sense of humor, this is definitely the game for you.  The game injects enough realism in it that anyone thinking of starting their own game company should give it a play but still also manages to be fun and driving for someone who just wants to play a game not make one.  In real life, you won’t see me on any game developer’s personnel list but you will see me playing this on Steam and trying to make that next must-play title.