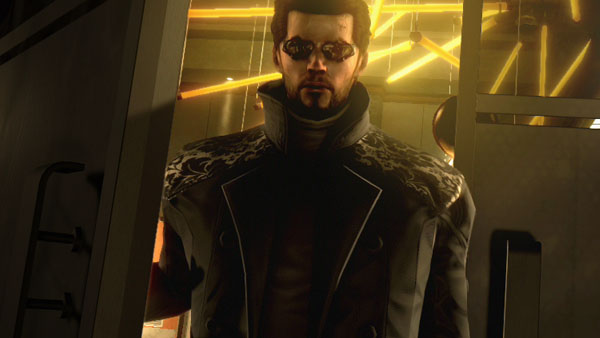 The Deus Ex series will always stand out to me for the infamous “hostage mission”. I, like so many other players, messed around in that office, collecting stuff only to get to the first mission location to find out the hostages were dead and all the cops gave me the stink eye. Heck, more than the stink eye – they didn’t spare a choice word for my getting those poor people killed. I started over and tore it up, becoming a hero to my AI peers and setting a whole different tone for the game. Timed missions and dialogue decisions that heavily impacted the game were hallmarks of the series, so when the possibility to continue that experience on the go came along with Deus Ex: The Fall, I was more than happy to go “Aug” or go home.

Deus Ex: The Fall is set in 2027– a golden era for science, technology and human augmentation, but also a time of great social divide and global conspiracy.  Powerful corporations have seized control from governments and command the drug supply needed by augmented humans to survive.

In this chaos Ben Saxon, a former British SAS Mercenary who underwent physical augmentation, is desperate for the truth behind the drug conspiracy.  Betrayed by his private military employers, the Tyrants, not only is his own life at risk but for all augmented humans, time is running out…

Deus Ex: The Fall is a story driven action-RPG and the first Deus Ex in the series to be released on mobile and tablet devices.  The game includes never before seen characters from the novel Deus Ex: The Icarus Effect, picking up directly where the book finishes. 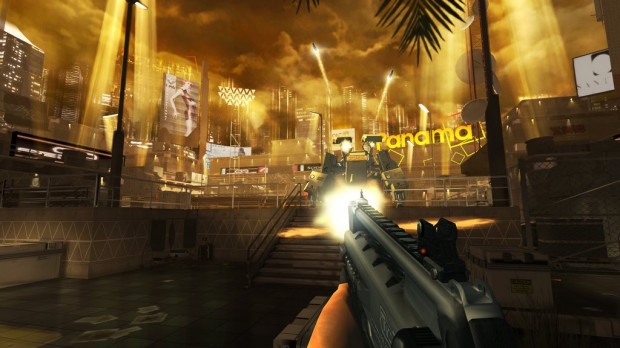 After reading all of the above before getting my hands on the game, you can see why I was psyched.  Unfortunately, the game has quite a few shortcomings – albeit, shortcomings that aren’t really the fault of the developer!

Thankfully, the storyline and player choices are just as good as the previous games.  I love a good, story-driven game that keeps me wondering what is going to happen next and this game delivers.  It had its hooks in me before the credits kicked in with a lengthy and story-filled opening.  It reminded me of a James Bond film where before the scantily clad silhouettes start dancing across your screen.  I literally said out loud, “Wow!  That was just the opening!” then had to explain myself to the others in the room. The story refused to let up or slow down either, keeping a very even pace. That being said, you had better not start snooping in all the trashcans or people will probably die.  Also, with the regular changes in location, attitudes, and dress styles of your enemies, you don’t get bored with the stunning graphics and scenery.

Going through the tutorial it was clear that the developers had listened to the complaints about other shooters/fighters on the iOS platform and had put in an auto-targeting system that allowed for minor adjustments to try for accuracy.  Brilliant, I thought, just what is needed on this platform so you can concentrate on moving and pulling the trigger which, on a handheld game system, pretty much takes up all the hands you have.  Also the melee system was set up so that if you got within melee distance of a target two giant buttons popped up on the screen giving the choice of lethal or non-lethal takedowns (and remember, these kind of actions make a difference in a Deus Ex game) so that, after you choose, you see a short animation of the takedown then your back in game to see any immediate repercussions. 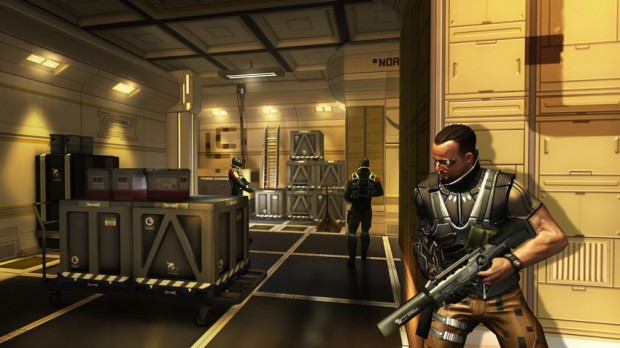 It all sounds great right?  Well it doesn’t take long to tell where it isn’t so right and that really comes down to the same issue every shooter faces on the iOS.  I download and devour shooters on the iPad and iPhone – constantly downloading and deleting them. I am determined to find one that I can point to as the “perfect” iOS shooter experience. Some have come close, real close, and Deus Ex is up there with them because it was designed to get past the issued that plagues the platform.  The auto-targeting was a great idea and, at first, works pretty well.  At lower levels where the AI isn’t very sharp, they come charging down in a row at you and you can take them out.  Then they learn they will live longer if they take cover and things get dicey.  They also know how to work as a team with flank and covering fire.  So an enemy pops behind cover and leans out to take shots, the autotarget is aiming center mass so it is just shooting boxes.  You can slide out from your cover and then aim the gun for their heads but the action of moving from cover, turning your cam view and aiming your gun requires about three hands.  I found myself doing weird balance and juggling of the console to try and complete the task.  At some locations it is possible to take pre-assigned cover which allows you to aim the gun then lean out and fire it, a very nice solution to the issue except sometimes the cover doesn’t want to take or worse doesn’t want to let you go afterwards so that as you finish off one enemy the other that was flanking you has you trapped.  Making weapons and armor improvements help with this but I still found saving after almost every kill the biggest savior.

The other issue would be in the melee attacks.  If you can’t get behind an enemy or charge them before they can shoot you you can find yourself toast on higher levels.  I would wait for an enemy to come down a corridor while I was in a room against a wall and my plan is to do a takedown, only to have them know I was there before rounding the side of the wall and shooting me right through the wall.  In theory you are supposed to be able to do a takedown the same way, through the wall, there is even an achievement but they see you before your buttons pop up. 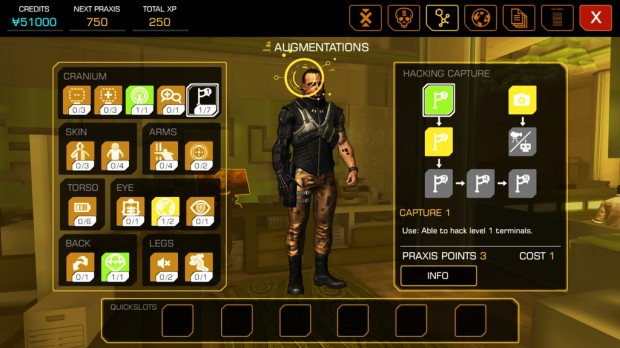 This game suffers from many of the same issues that this platform holds for all shooters, you need an extra hand.  Deus Ex: The Fall is a fun, immersive game with outstanding graphics and a story which hooks you quick and keeps you enthralled.  I just wish it was on a more enjoyable platform for shooters, then it would be a tour-de-force.