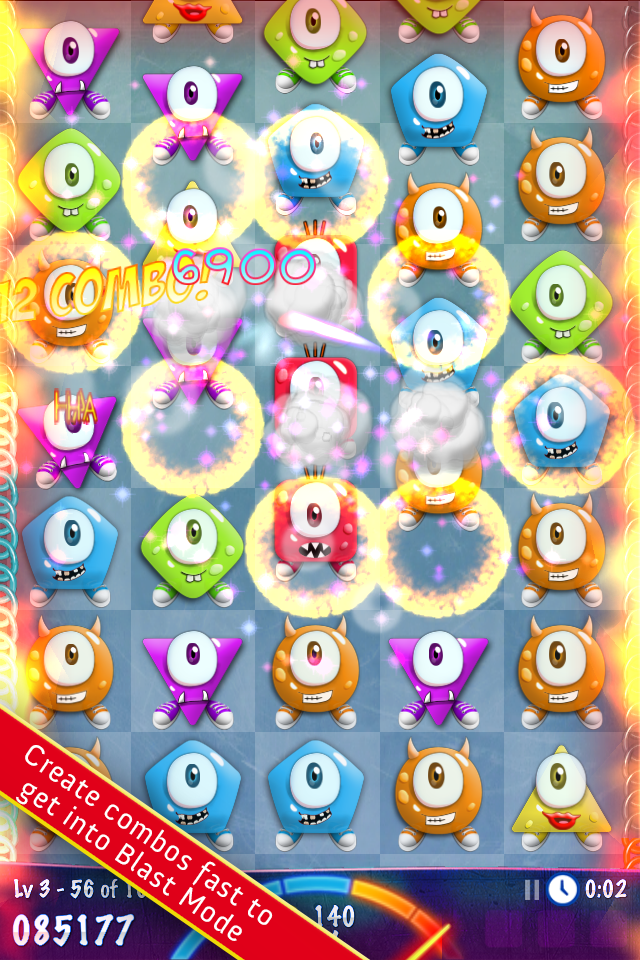 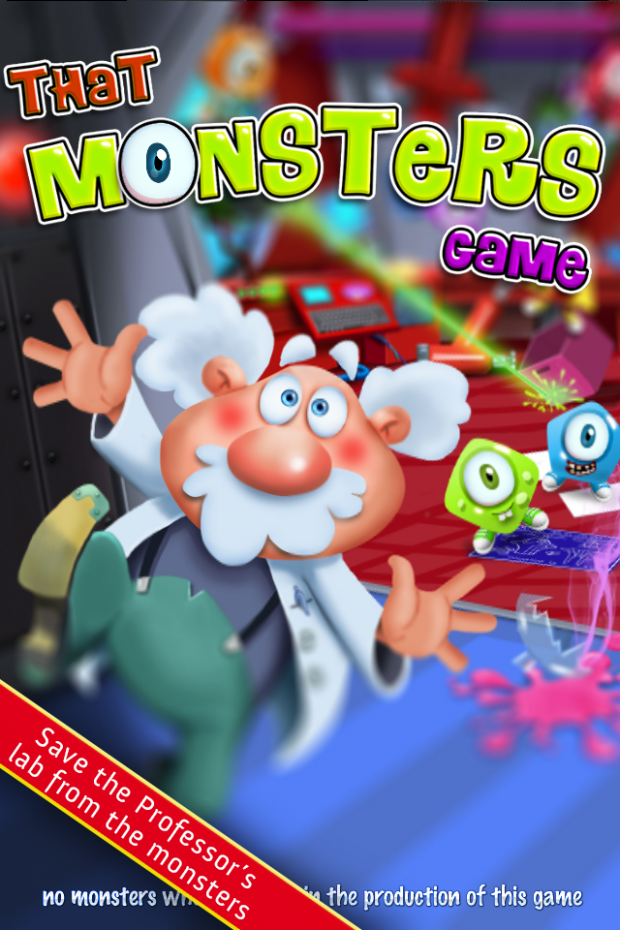 This is the summer to have monster fever. With the House of Mouse putting out a sequel to their much beloved monster movie, Monsters Inc., you can’t go to a movie theater or many other places without getting a blast of monsters. The video game market is definitely no exception but the offerings are definitely hit and miss, so it is nice to recommend a game that is right on the money. That Monsters Game is a fun play for the whole family on-the-go and did I mention it’s free?

Description:
When the nutty Professor Marty’s newest experiment goes horribly wrong, monsters are created by the masses and threaten to destroy his laboratory. Demolish these monsters by matching three or more and zapping them away.
Collect coins and gems throughout the game and use them to buy Labkits, tools to destroy even more monsters.  Use earned XP stars to unlock game play modes and survive until the next level!
“With the bright colors, fast pace and never ending monsters filling up your screen, That Monsters Game provides a fun pastime for every type of mobile gamer,” said Neville Attard, founder of Software Prodigy.
Be prepared to swipe your way to monster-zapping victory! 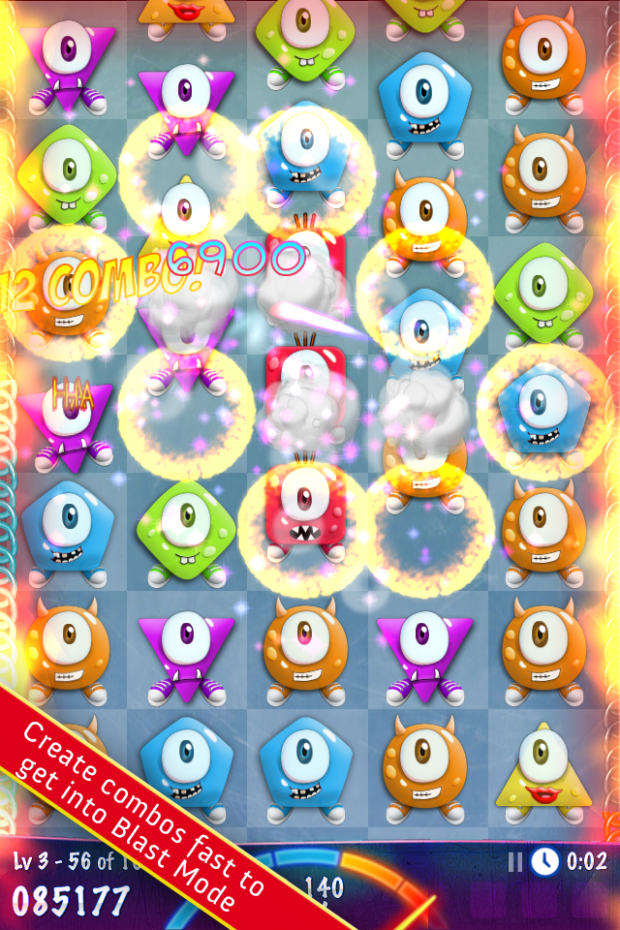 Features:
– Three Unique game play modes that unlock different tools and challenges.
– Beautiful graphics and gameplay features.
– If you’re fast enough, earn extra points during monster explosions!
– Play alone or invite your friends to help you take on the monsters and compete for the ultimate high score!
– Participate in weekly tournaments with your Facebook friends, earn achievements and make your way to the global leaderboards on Game Center.
– If you ever get stuck, just email Professor Marty for a hint!

Hands On:
This game is just a whole lot of addictive fun.  The music is whimsical, the sound effects are fittingly silly and the graphics are nice and clean and only as complex as they need to be.  I love the electricity effect you get when you start making the connections and to make sure the game has a whole family feel, the critters cheer you on as you zap them.

Gameplay is straight forward with a similar feel to a match three game such as Bejeweled though I think the monster theme and whimsical style make this game much more enjoyable.  Also instead of moving blocks to match you drag your finger along to the monsters of the same color and as long as they are adjacent to the previous monster they electrify.  The funny thing is it is harder to describe gameplay instead of just playing it so here is a trailer.

There!  That was easier!  You get bonuses for combos and you collect coins during play for special attacks.  You get three plays to start with and earn new plays every 15 minutes after that unless you decide to purchase plays using real currency.  That is one of the very important and great things about this game, if you want to put some money into it to help support the game and make it so that you get more attacks and plays you can but if you just want it to be a free to play game you can keep it that way and still play great.  Many games claim to be free to play but then prove to be pay to win when you get past the first couple levels, this game isn’t which makes me want to invest in the game and the developers even more.

That Monsters Game can be played alone or with friends through contacts such as Facebook.  You can even start tournaments with your friends and see who gets the highest score and the champion achievement.  This is also a free function so you can start you tournaments and play away without spending a dime. 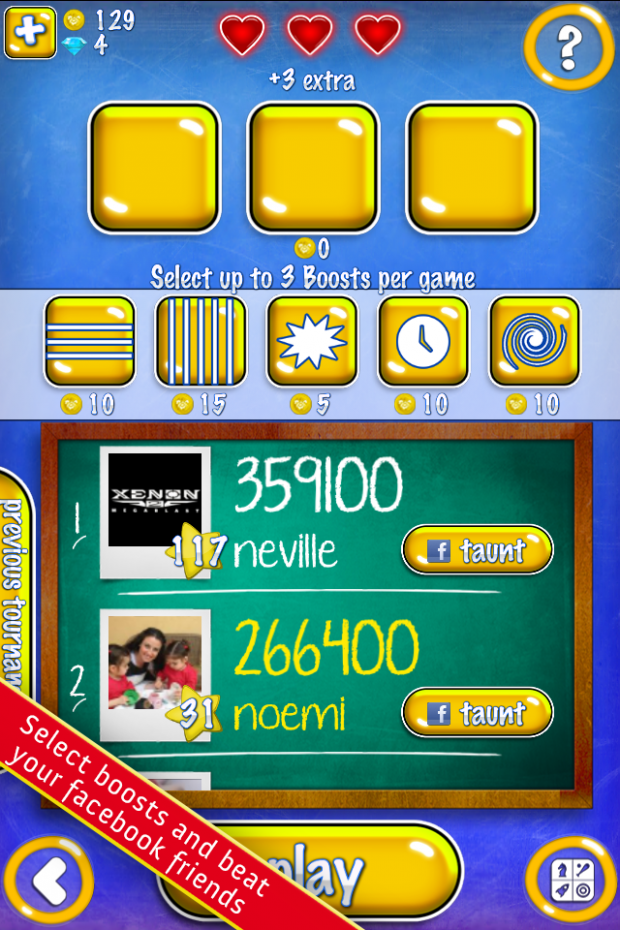 There are three types of gameplay, the standard blitz where you score as high as you can in a limited time, challenge mode where you have to make certain combos or shapes and the strategy mode where you don’t have to worry about time but instead about agitated monsters that jump at the screen if you don’t eliminate within 5 turns, once they do that three times it is game over.

This really is a just about an all ages game, there are no scary monsters and the gameplay would be good for kids just learning shapes and colors as well as getting them to plan ahead on how to make moves, all while cute monsters get zapped and cheer them on.  For the older players the challenges of scores, achievements and tournaments should keep you going. 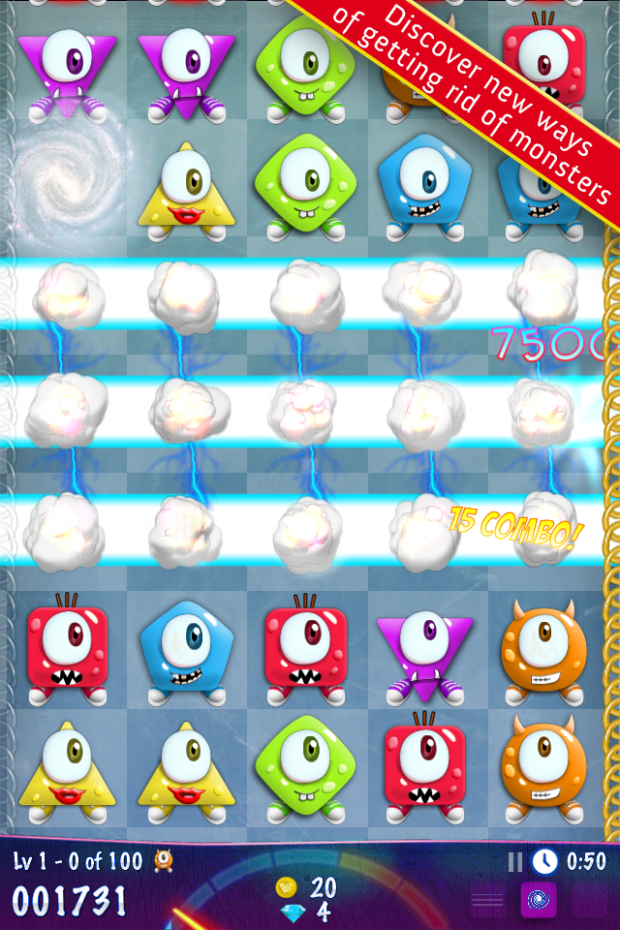 That Monsters Game is a great addictive game with a whimsical atmosphere that hides the challenge within.  It is a truly free-to-play which is unusual these days, you only pay if you want to not wait for more plays or to build up enough coins for special attacks.  I found myself getting bored with Bejeweled but I played this game until my phone battery was drained.  Give it a play and I bet you find yourself playing it everywhere you go while waiting in lines, waiting for meetings, maybe waiting in the audience for that certain summer monster cartoon to start…