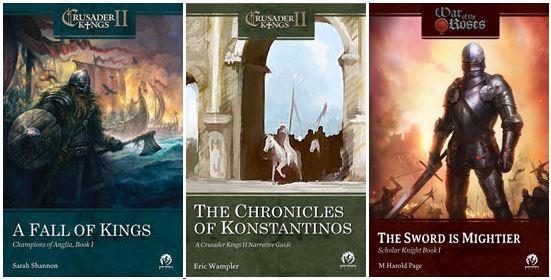 NEW YORK — July 12, 2013 — Paradox Interactive, a publisher of games and an on-screen scrivener, today announced that six titles have been added to its e-book library and are now available for purchase on Amazon.com. http://amzn.to/12IQAI0

The line-up includes A Year with Mojang: Behind the Scenes of Minecraft, the first-ever biography delving into the mega-hit indie game that has forged one of the largest game communities to date, as well as three previously unannounced books, based on the Crusader Kings II and War of the Roses franchises.

Six books will be available under Paradox Books initially, and several more have been signed and will be distributed later in the year. The books will broach everything from biographical behind the scenes books to game strategy guides to fiction and novels.

The Chronicles of Konstantinos: A Crusader Kings II Narrative Guide

Half strategy guide and half novel, this “Narrative Guide” to Paradox’s award-winning Crusader Kings II tells a fictionalized tale of deceit, diplomacy, and dynasties. Players will learn winning tactics for playing the game as they read through an intriguing story set in the medieval game world. The book also includes original comics by David “Svip” Udsen.

A Fall of Kings: Champions of Anglia (Book I)

A Fall of Kings is a fictional novel set in an alternate history. In the year 1066, England must defend herself from the largest invasion since the days of Rome, while two young Earls work to unravel hints of a conspiracy that could tear the kingdom apart!

The Sword is Mightier: Scholar Knight (Book I)

England, 1454, the chaotic eve of the Wars of the Roses. Jack Rose would rather be a scholar than a knight. However, when a brutal landowner steals his family estates and plans to evict the tenants, Jack must take up the sword and win back his inheritance by force of arms. As he wades through increasingly lethal encounters, he must decide who he really is.

To purchase e-books from Paradox Books, search for “Paradox Interactive” in the books section on Amazon.