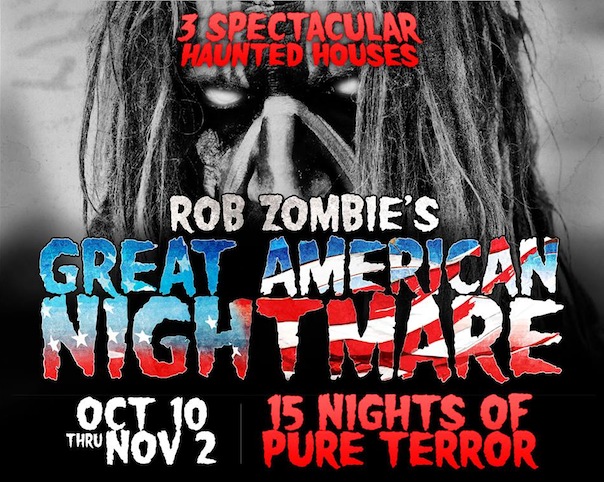 Rob Zombie will be creating his own haunted event this October over at the Fairplex (dubbed the “FEARplex” for the event) in Pomona, CA called “The Great American Nightmare”. The event will run Thursdays, Fridays, Saturdays, and Sundays starting on October 10, 2013 and going until November 2, 2013. The event will feature three haunted mazes based on Zombie’s horror films.

Groundbreaking musician and filmmaker Rob Zombie will unleash his Great American Nightmare on Los Angeles this Halloween season. This bone-chilling experience will combine the most advanced haunted house attractions with a not-to-be-missed music festival from top artists in hard rock, alternative, EDM, and more, every Thursday, Friday, Saturday and Sunday from October 10 through November 2, 2013 at the Fairplex FEARplex in Pomona, CA, just outside Los Angeles.

A creative collaboration between masters of the macabre Rob Zombie and preeminent haunted house producer Steve Kopelman, the fully immersive haunted house experience will feature three attractions based on Zombie’s own horror films: Lords Of Salem Total Black Out, The Haunted World Of El Superbeasto 3D, and Haunt Of 1,000 Corpses. The shocking–and sometimes disturbing–fright attractions will offer a three-dimensional experience with animatronics and effects, a maze that is the ultimate definition of claustrophobia and fear, sudden chills and startling thrills, and salacious humor that will make one scream with fright and laughter.

In addition to music, one special night will also feature the outrageous pro wrestling sensations Lucha Libre USA. Look for details about the music performance schedule–including additional major headlining acts–to be announced on June 29 and visit www.GreatAmericanNightmare.com for details.

“This is it! The ultimate badass Halloween experience! No one will walk away disappointed,” says Zombie. “I am thrilled to bring The Great American Nightmare to California and begin a reign of bloody terror!”

The FEARplex for Rob Zombie’s Great American Nightmare will include 150,000 square feet of horror and entertainment and is not geared towards young children or the faint of heart. Patrons should be prepared for maximum scares!

“Having produced haunted attractions for over 30 years, I have never been more excited about a project than I am with The Great American Nightmare. To produce an event with partners like Rob Zombie, Kevin Lyman, John Reese and Andy Gould is a dream come true. This no-holds-barred first year event is destined to change the haunted house landscape for years to come and I am ecstatic to be a part of it,” says Nightmare producer Steve Kopelman.

The Great American Nightmare’s Bloody Boulevard will offer outdoor screenings of classic horror films, a DJ, food vendors, beer, wine and spirits, and much more, with freak show characters roaming throughout the grounds each night.

Nightmare music co-producer Kevin Lyman admits, “Rob Zombie’s Great American Nightmare is going to be so terrifying, you won’t catch me in any of the three haunted houses! For those of you who are scaredy cats like me, there will be plenty of other attractions that are guaranteed to entertain, including a special concert each night.”

“Great American Nightmare is one of the most exciting projects I have ever been associated with,” says Nightmare music co-producer John Reese. “The opportunity to work with the genius that is Rob Zombie is awe inspiring. This is set up to be one of the CAN’T MISS EVENTS OF THE YEAR!”

Tickets for Rob Zombie’s Great American Nightmare are available starting at only $30 beginning Saturday, June 29 at www.GreatAmericanNightmare.com. Each ticket includes access to all haunted house attractions, concerts and midway activities. Tickets will also be available for purchase onsite at the Rockstar Energy Drink Mayhem Festival San Bernardino show at San Manuel Amphitheater (June 29) and during the Los Angeles County Fair at Pomona Fairplex (August 30-September 29). VIP packages will also be available for purchase at www.GreatAmericanNightmare.com.

The Fairplex is located at 1101 W. McKinley Avenue in Pomona, CA, centrally located in the heart of Southern California. The Fairplex is also home to the LA County Fair, the largest county fair in the world.

Rob Zombie’s Great American Nightmare is made possible through the support of sponsors including Monster Energy Drink and Ernie Ball. 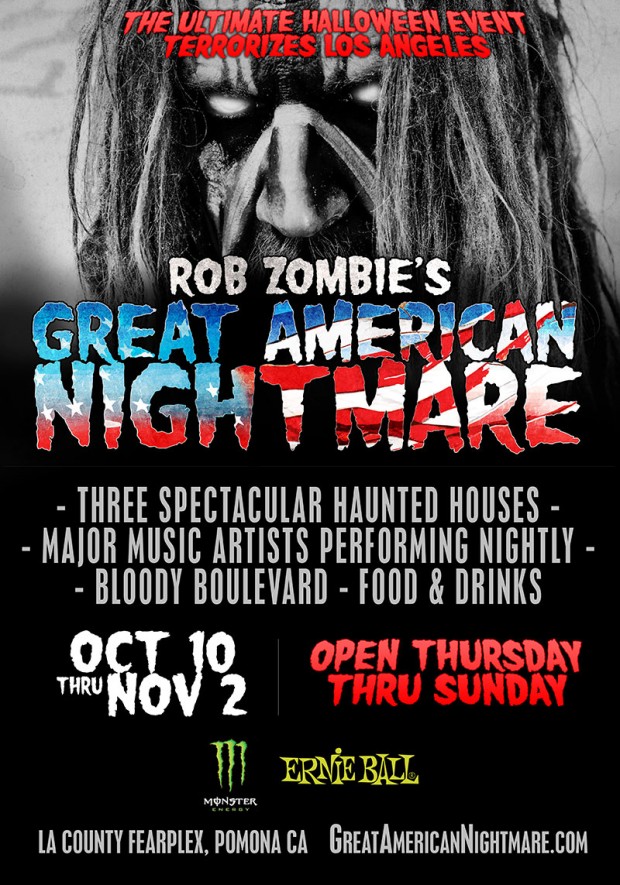