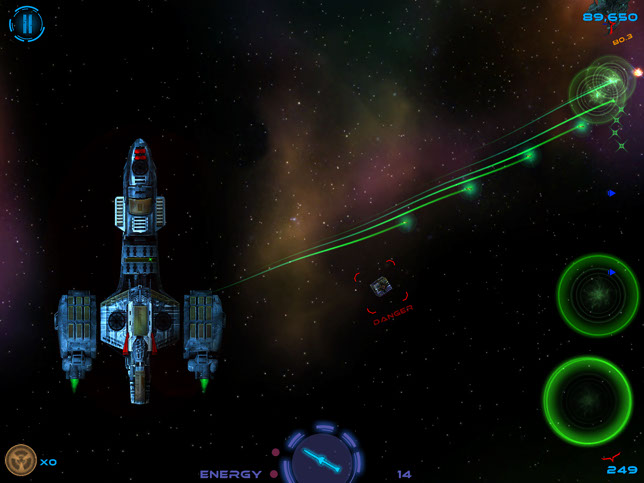 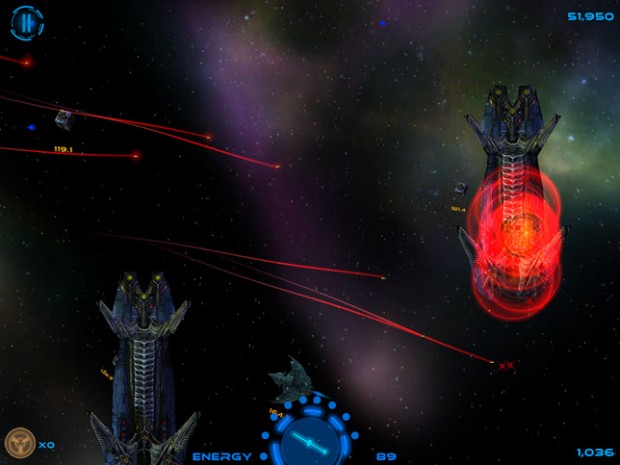 When I was just a young lad, I discovered that I was wickedly-good at Missile Command.  My sister’s boyfriends, on the way to her room, would hear the sounds coming from mine, see a little six year old boy with an Atari joystick and think “time to school the kid.”  Several hours and screams from my sister later the ex-boyfriend would be on his way out the door thoroughly defeated and promising a rematch.  They did come back often too, in order to try their luck at the game instead of my sister, and none could top my score.  As other games came along, I lost interest in Missile Command, but never did lose the high score on it in our house. Fast forward to today and I find myself reviewing a game that though amazingly superior in its visuals, has an eerie resemblance in game play.

Graphically, Starship Battles presents in full 3D, with high resolution environments and science-fiction warships.  In addition, game play is greatly enhanced by simple and responsive controls.  As the player commandeers the warship’s battle-station, he is awarded fantastic visual effects as his weapons fire and enemy ships explode in brilliant 3D.  The player can spend soft currency to upgrade and design his fleet.   Designer ships come with visual personalization, War-Paint, and instant game-play bonuses.

At product launch, Starship Battles offers five highly detailed ships, each with five War-Paints.  Additional ships will follow.  The game begins with the avatar mounting only one Frigate to defend the galaxy against an infinite force of relentless aliens.  The Cruiser, Destroyer, Battleship and Corvette wait to be purchased with minerals earned through game-play.  Victories and achievements are posted at Game Center through social media integration, lending another dimension to extend competitive game-play. 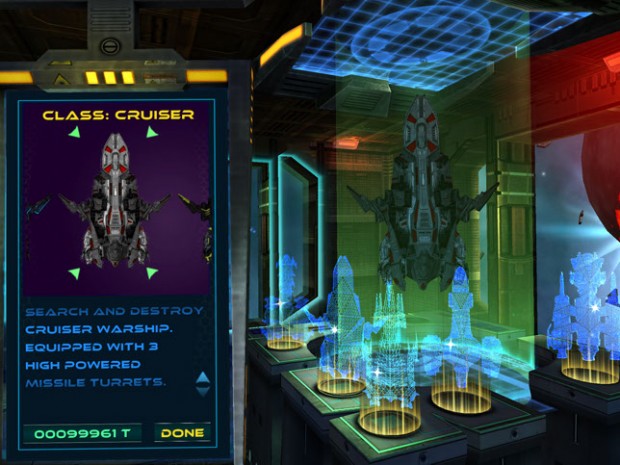 So instead of a whole bunch of bases like in Missile Command you have one ship and your screen is large enough that you need to pan around.  Instead of missiles making a beeline at you it is little ships with remarkable detail for thier size and if you pan around the screen you will see some larger stationary ships that are launching the small ones.  You just cruise your view around space and touch the screen to fire a missile, fire a nuke or collect a mineral.

Collect enough minerals or pay enough real life cash and you can change the paint job on your ship or purchase four other ones.  That is the whole game.  Fire at little kamikaze ships, fire at ship carriers, collect minerals for paint jobs and new ships.  It has an arcade style simplicity of play that dates back over three decades with state of the art 3D retina graphics.  Of and I forgot to mention the price… two bucks.

This game looks good enough to probably trick kids into thinking it is a new style of game while also getting them to experience old school arcade gaming. You could also play it for yourself and relive childhood memories with graphics that no longer hurt the eyes.  While Starship Battles certainly didn’t invent this kind of arcade play style – it does make it look sexy!