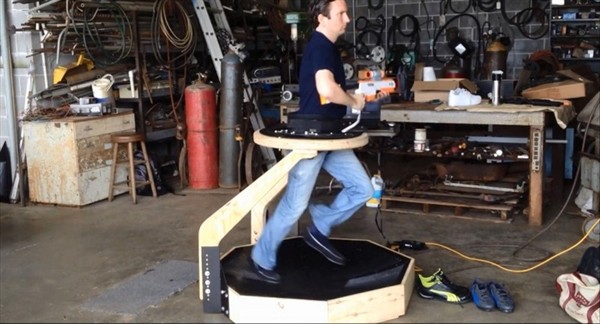 HOUSTON, TX – Virtuix has launched a Kickstarter campaign today, June 4th for the Omni, the first virtual reality interface for moving freely and naturally in your favorite game. The full set of incentives, accessories, and configurations are now available on Kickstarter at:

The Omni will free gamers from passive, seated gameplay, unleashing the full potential of virtual reality gaming with the Oculus Rift and future head mounted displays.

“Gaming on a keyboard, mouse or gamepad while seated pales in comparison to the intense experience and fun that comes from actually walking, running, and jumping in games.” said Jan Goetgeluk, CEO of Virtuix. “Bringing this innovation to Kickstarter will accelerate the integration of natural motion into emerging virtual reality applications such as gaming, fitness, and simulation.”

The Kickstarter community has been instrumental in funding the current wave of exciting new virtual reality technologies, making Kickstarter the ideal place to launch the Omni. Kickstarter funding will be used to prepare for final production and get Omnis built and into the hands of as many gamers, researchers, enthusiasts, and developers as possible.