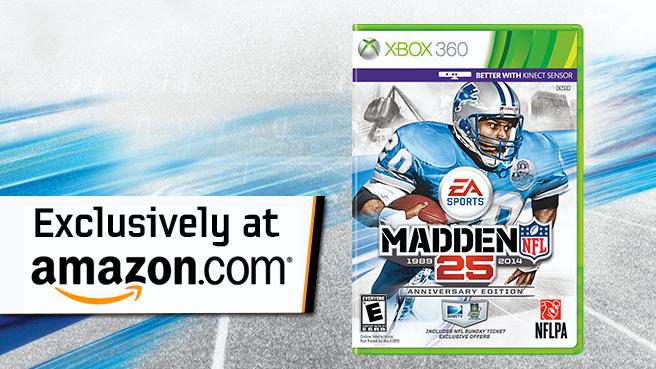 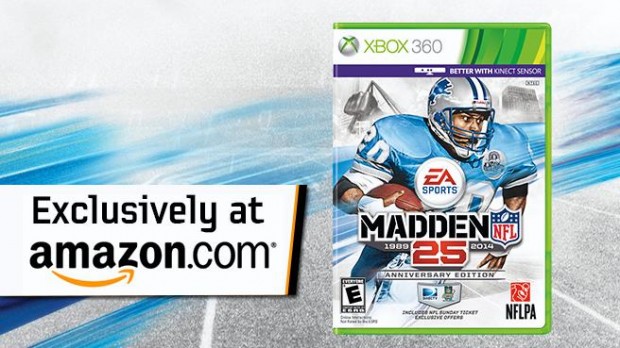 May 17, 2013 –Today EA SPORTS and Amazon announced the Madden NFL 25 Anniversary Edition. Every copy of this limited-edition game will come packed with Madden NFL 25 plus exclusive offers for DIRECTV and NFL SUNDAY TICKET. Offers include:

With over $400 in value at an introductory price of only $99.99, the Anniversary Edition is available for pre-order in very limited quantities on the Xbox 360 and PlayStation 3 gaming consoles, exclusive at Amazon starting today.

In Madden NFL 25, unlock the power, precision, and creativity of the NFL ball carrier.  Whether you’re a slashing running back, dual-threat QB, or ball-hawking safety, unleash 30 new moves and string together devastating combos with the all-new precision modifier.  For more details on all the innovative new features, check out theMadden NFL 25 Playbook.

Only available on DIRECTV, NFL SUNDAY TICKET enables fans to watch every out-of-market game every Sunday in HD. For more information visit: www.directv.com/sports/nfl.

All player participation has been facilitated by National Football League Players Incorporated (NFL PLAYERS), the licensing and marketing subsidiary of the NFL Players Association (NFLPA).